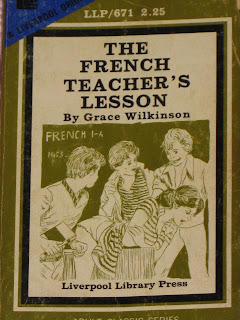 The French Teacher's Lesson begins with the uplifting message that dreams can come true. After presenting a physical description of Vicki ("tall, slender, full breasted girl with a wealth of blonde hair"), author Grace Wilkinson writes, "Well, she'd wished and wished and worked and worked...and now she had her wish! She was in New Orleans, and she was the new French teacher for Andrew Jackson High School" (page 5).  We learn soon that Andrew Jackson High School is a reform school.  The principal, upon meeting Vicki, tells her he himself wouldn't have hired her. She responds, "But, Mr. Clark...I think my credentials is in order" (page 9). Good thing she wasn't hired as the English teacher.

Her first day is a rough one, as the students pay no attention to her. And two of them - Mark Price and Katy - fool around right there in the classroom, and don't stop when Vicki tells them to.  At the end of the day the principal tells her the student committee asked that she be one of the monitors for Friday's dance. "I'd say that's quite an honor," he tells her.  Really?  What a strange world he lives in.  I'd say it's an annoying imposition on my free time. But then again, my fervent wish wasn't to become a high school French teacher.

At the dance, Vicki steps out into the parking lot to watch three kids have sex in a convertible. Soon, of course, Mark Price is there. She tries to fight him off, but fails.  She fails repeatedly, and then ends up enjoying herself, which is slightly less than believable.

Though this school is full of hoodlums, apparently they hold classes on Saturdays, for the day after the dance (and after her rape), Vicki is back at work. After school, Mark Price and some of the other boys attack her. When she begs them not to do anything, Mark tells her, "Why, Miss London, you're all upset over nothing again. Just like last night" (pages 112-113).  And though she is about to be raped by several of her students, Vicki seems more upset by the fact that they're smoking pot and have given her a hit. She says, "Oh no...my God, not marijuana...Dear God, no, no, no!" (page 114).

When caught by the police, the students say that Vicki forced them all to have sex with her, and the cop believes them. No one ever accused the police of being intelligent.  Vicki just can't get a break, for while in jail the cop decides to have his way with her as well.  And we get this interesting description: "His weighty balls reminded her of a pair of eggs in a fuzzy suede bag as they pendulously swayed between his muscular thighs" (page 162).

The French Teacher's Lesson is a volume in the Adult Classic Series put out by Liverpool Library Press.

Posted by Michael Doherty at 1:44 PM