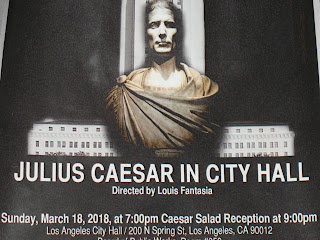 Yesterday the Shakespeare Center of Los Angeles put on a special staged reading of Julius Caesar at City Hall. This marked the twentieth anniversary of a performance the group did on the steps of City Hall. This time, however, the performance was inside – in the Board Of Public Works meeting room – and the company made good use of the existing space and lights. As it was a staged reading, the actors held scripts (most of them seemed to be using the Signet Classics edition of the play) throughout the evening, but still gave relatively full performances. As for costumes, the men wore shirts and ties, and no props were used. The room has a large, U-shaped table in the front, and the company made use of it. The room itself has a high ceiling, so sound can get a bit lost up there; I chose to sit fairly close to the front, and had no trouble hearing.

There is a wide aisle between the two audience sections, and the company performed some of the action there, including the first scene. As I mentioned, there were no props, but when Lucius spoke the lines about the paper in Act II, he pretended to hand Brutus a paper, and then Jamison Jones as Brutus used his copy of the play as the prop, which actually worked well. Jamison Jones gave a really good performance. There was a moment when he scratched his head, then stopped when his wife spoke the line about scratching his head. It had the feel of almost being an unconscious move, which was great. I was surprised by how many wonderful little details the actors were able to give, considering they had to hold scripts the entire time, and taking into consideration they didn’t have much rehearsal time (in fact, they weren’t able to rehearse in the actual space until just a few hours before the performance).

The large table was used for the scene leading up to Julius Caesar’s death (Act III Scene i), with Julius Caesar taking the upstage center seat. He remained seated while the others stood. As there were no swords, his assassination was handled in an interesting manner. Each of the men slammed his hand against the table in quick succession, with Brutus doing it last. What is also interesting is that Julius Caesar remained in that chair for the rest of the play, a dominant presence even after his death, as all of that action stems as a result of that decision by the men. One thing that always strikes me about this play, in the scene where Brutus and Antony speak to the crowd, is how easily the multitudes are swayed by oration, and by whoever is currently speaking, and how little they actually think about what they hear. I love that moment when Antony must remind them (and prompt them), “You have forgot the will I told you of.” Joe Spano was wonderful as Antony, particularly in this scene, knowing just how to play the crowd. Because Julius Caesar remained present after his death, seated upstage, it was actually more of a jolt to the audience when he suddenly stood to approach Brutus as an apparition at the end of Act IV. It was almost as if he’d been watching all along, and chose this moment to make himself known. I should mention here that Armin Shimerman was excellent as Julius Caesar. I particularly enjoyed the scene when his wife tried to persuade him to remain at home.

Interestingly, after Cassius died, he took one of the seats at the table too, effectively joining Caesar once again, though the seat farthest from him (downstage left). When Brutus spoke the line, “O, Julius Caesar, thou art mighty yet,” he faced upstage toward Julius Caesar, which was nice. Then when Brutus died, he too took a chair at the table, downstage right, opposite Cassius. During Octavius’ final speech, Julius Caesar stood up, remaining upstage center, providing an effective stage image.

Shakespeare Reference in How Not To Kill Yourself 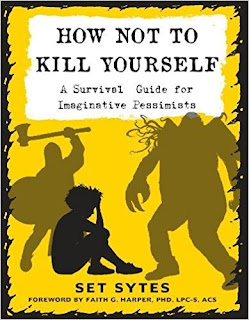 How Not To Kill Yourself: A Survival Guide For Imaginative Pessimists, by Set Sytes, contains one Shakespeare reference. Sytes begins the chapter titled “Immortality” with a line from Antony And Cleopatra: “I have immortal longings in me” (p. 106). This is spoken by Cleopatra in the fifth act of the play, just before she kills herself: “Give me my robe, put on my crown; I have/Immortal longings in me. Now no more/The juice of Egypt’s grape shall moist this lip.”

How Not To Kill Yourself: A Survival Guide For Imaginative Pessimists was published on March 13, 2018.
Posted by Michael Doherty at 2:20 PM No comments: