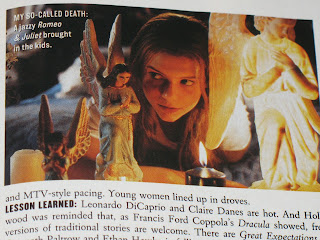 I’ve been going through more old magazines (I collected a ridiculous amount of Star Wars-related items between 1977 and 2005), and of course found more Shakespeare references. In the May 1999 issue of Movieline, there is an interview with Liam Neeson. When asked if he had any preconceptions about the film business, Liam said: “My ultimate aim was to be Iago for the Royal Shakespeare Company. Theater was what I wanted to do” (p. 49). A little later he is asked about whether he considers George Lucas and Steven Spielberg geniuses. Liam hesitates to call anyone in the film business a genius, so the interview asks, “What about playwrights?” Liam answers: “Genius? Shakespeare and Chekhov” (p. 49). That issue also features a piece on James Earl Jones. At the beginning, it lists some of his accomplishments, including “Shakespeare’s King Lear, Macbeth and Othello” (p. 55). And then partway through the interview, he is asked: “What about the Othello rumor – that every time you played Othello you slept with your Desdemona? Is that something you’d like to put to rest?” James Earl Jones answers: “I don’t know. I might want to perpetuate it” (p. 58). The interviewer says, “Two of your Desdemonas were Jane Alexander and Jill Clayburgh.” And then the interviewer says, “In 1964, though, you did break up a marriage when you fell for your Desdemona, Julienne Marie.” The interviewer also mentions James Earl Jones appearing in Looking For Richard.

In the February 1997 issue of Premiere there is a small blurb about William Shakespeare’s Romeo & Juliet (the one with Leonardo DeCaprio and Claire Danes): “It seemed like a nonstop festival of iambic pentameter his year, what with Twelfth Night, Hamlet, and three takes on Richard III available. But Absolute Ballroom director Baz Luhrman’s reworking of this romantic perennial boldly went where no Shakespeare production had gone before, making thrilling use of surreal Mexican locations, exciting young stars with teen-fan cred, and MTV-style packing. Young women lined up in droves” (pages 48-49). The caption to the accompanying photo of Claire Danes played on her earlier role in My So-Called Life: “My So-Called Death: A jazzy Romeo & Juliet brought in the kids.” And then a piece on Kate Winslet has this brief introduction: “Star turns in Sense And Sensibility, Hamlet and Titanic have taken her around the world, but Kate Winslet still phones home every day” (p. 77). Trish Deitch Rohrer writes, “Kenneth Branagh, who directed Winslet as Ophelia in his recently released Hamlet, says that when he first met the actress – she was eighteen, and auditioning for a part in Mary Shelley’s Frankenstein – he knew he was in the presence of a star” (p. 78). Rohrer also writes, “It didn’t bother her that Branagh slapped and shook her hard before cameras started rolling on the ‘Get thee to a nunnery’ scene in Hamlet; that was improvisation” (p. 78). Hamlet is mentioned again a little later: “She was also photographed by a tabloid kissing her Hamlet costar Rufus Sewell in a restaurant, though she has said they were only friends” (p. 79). That piece also contains a photo of Kate Winslet and Kenneth Branagh from Hamlet. 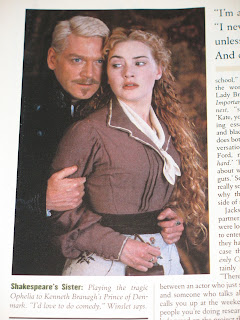 Posted by Michael Doherty at 8:31 PM No comments: 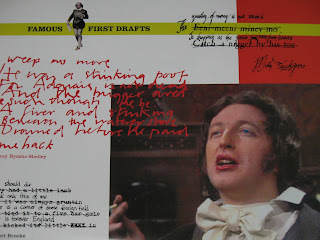 Yup, there are Shakespeare references everywhere. I’ve been going through boxes of magazines and other things of dubious worth that I’d been saving. I found a Monty Python 2002 calendar (“Now For Something Completely Different”), and it contains a Shakespeare reference. On the June page, there is a joke about “Famous First Drafts,” including a bit of one of Portia’s speeches from The Merchant Of Venice, with “Eeni-meeni-miney-mo” becoming “The quality of mercy is not strain’d.” Certainly an improvement. 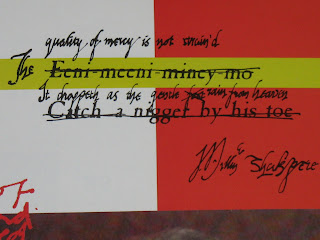 By the way, unrelated to Shakespeare, there is also an early draft of Rupert Brooke’s “The Soldier,” which reads, “Mary had a little lamb/And it was always gruntin/She tied it to a five bar gate/And kicked its little cunt in.” Coming from Sterling, Massachusetts (the land of Mary and her bloody lamb), I have fondness for this bit.
Posted by Michael Doherty at 4:20 PM 1 comment: 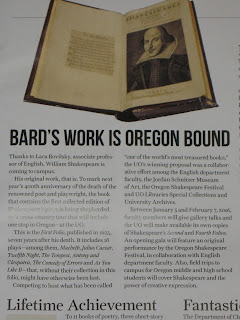 Maybe I should no longer be surprised by how often Shakespeare is mentioned in the books and magazines I read. Here are a few more references found in magazines.

In the Spring 2015 issue of Cascade, the University of Oregon College of Arts and Sciences magazine, there is a short article titled “Bard’s Work Is Oregon Bound.” The article is about how a copy of the First Folio will be at the University of Oregon, and also mentions that the university has copies of the Second and Fourth Folios, which I didn’t know when I was there.

In the November 30, 2001 issue of Entertainment Weekly, there is a section on new DVD releases, including a blurb about the James Earl Jones King Lear.

The Winter 2005 issue of Screen Actor, the Screen Actors Guild Magazine, contains an article on protecting minors online. The title of the article is “A Brave New World?” The title is, of course, a reference to Miranda’s line in The Temptest, “O brave new world,/That has such people in ‘t.”

In the May 2017 issue of Westways (the southern California AAA magazine), there is a short interview with actor Jimmy Smits. When asked, “Is there any character you’ve always wanted to play?” Jimmy Smits begins his answer by saying, “I have a great appreciation for Shakespeare and George Bernard Shaw and English literature” (p. 64).
Posted by Michael Doherty at 3:50 PM No comments:

Shakespeare References in The Office Party 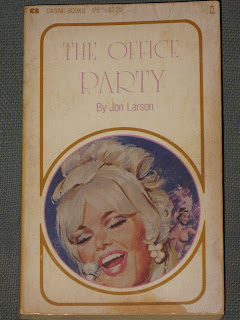 I was quite surprised when I found Shakespeare references in Little Girl Lust, but perhaps even more surprised to find a couple of references in a second porn novel, The Office Party. The Office Party isn’t the usual fare, but is about a woman who would like to have sex with dogs and then has sex with dogs. There are two Shakespeare references in this book, and the first is to Hamlet. But, no, it is not to the “dog will have his day” line. A missed opportunity there. Instead the reference is to the most famous speech of the play. Jon Larson writes, “Sounds groovy – but can I ever take that huge thing up my but – that, my luv, is the question – to fuck my asshole or not to fuck my asshole!” (p. 72). And yes, “but” is spelled with one T. These books aren’t carefully edited. The entire book is told in the third person, except half of one page, which is suddenly from the main woman’s perspective. Anyway, the second reference is to Romeo And Juliet. At the office party, Dennis – the boss – is attracted to Diane, while Dennis’ girlfriend is fooling around with Diane’s husband. Jon Larson has Dennis say to Diane, “A husband and wife coming to a party like this, and no getting uptight when a Romeo like me plays with his pretty wife!” (p. 99). I’m pretty sure he meant to write “not getting uptight,” not “no getting uptight.” But he could have meant “no getting uptight,” I suppose.

The Office Party was published in 1978 by Casino Books.
Posted by Michael Doherty at 11:33 PM No comments:

Shakespeare References in Premiere, May 1999 Issue 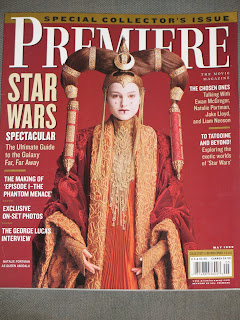 I’ve been going through a lot of old Star Wars magazines that I collected (and am now parting with), and found that the May 1999 issue of Premiere contains a few Shakespeare references. Even before the magazine’s table of contents, there is a Shakespeare reference. There is a two-page advertisement for Max Factor’s A Midsummer Night’s Dream Collection. At the time, A Midsummer Night’s Dream was in the movie theaters, and on the upper left corner of the first page it says, “Experience the film, William Shakespeare’s A Midsummer Night’s Dream only in theaters” (p. 6). And the film’s poster is shown. Below that it says, “A dream you never want to end.” On the second page, the collection is shown, and mostly the items are named after the fairies: Pease Blossom lipstick, Cob Web nail polish, Mustard Seed nail polish, Mustard Seed lipstick. Ad copy reads, “A collection inspired by the movie, and designed by the movie make-up artist Ronnie Specter” (p. 7). 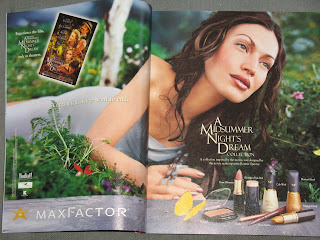 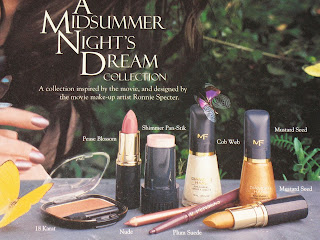 Then there is a little blurb about the movie in the Previews section. It reads, in part: “Fairies, lovers, and fools (if that’s not redundant) take up residence in a quasi-19th-century Tuscany, in this fifth cinematic adaptation of the Bard’s mirthful play” (p. 24).

There is also a reference to King Lear in a short piece on Woody Allen’s Stardust Memories: “Over the next few years the undoubtedly gun-shy Allen generated such undemanding and self-exonerating fluff as Broadway Danny Rose and The Purple Rose Of Cairo, casting himself or Mia Farrow as the likable schlemiel – more sinned against than sinning – and didn’t recover his artistic footing until Crimes And Misdemeanors, in 1989” (p. 60). The phrase “more sinned against than sinning” is from a speech that King Lear delivers in the third act.

Then one of the articles on Star Wars is titled “Brave New Worlds,” a play on Miranda’s line from The Tempest: “O brave new world,/That has such people in ‘t.” There is also an article on actor Liam Neeson, who played Qui-Gon Jinn in Episode I. “‘Nobody’s interested if you played the greatest Hamlet in Christendom,’ says Neeson, who played Oscar Wilde on Broadway last year” (p. 90). 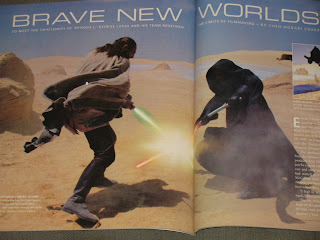 And there may be more references than the ones I’ve listed. I didn’t read every single word in the magazine.
Posted by Michael Doherty at 1:58 AM No comments: