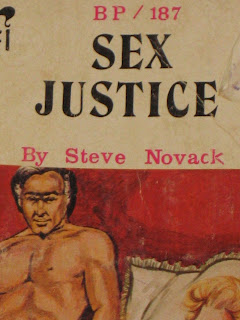 You know, I might have more faith in this country's legal system if we could count on a little sex justice. Author Steve Novack introduces us to the character Carrie Simpson with this sentence: "Her entire life centered around keeping a dick somewhere in her body" (page 3).  Friends and neighbors would often come over to try to guess where exactly it was.  It could be anywhere.  First one to discover its hiding place wins a prize.

Carrie Simpson, as we soon learn, is being taken by the sheriff to see the judge. Is she in trouble? What sort of trouble? And will she receive sex justice?  Oh, you know somehow she will.  But first she has to provide some thrills to the sheriff, which is a bit dangerous while he's driving. But at least the sheriff is an honest man. He tells her, "You see, kid, if we cared a hell of a lot about the rights of others we couldn't remain on the force for very long" (page 12). I respect that lack of guile. And we learn that the big question in Carrie's life is whether she enjoys intercourse or oral sex more. "One day, she promised herself, she would decide" (pages 8-9).

For now, she must spend the night with the judge, so that he'll give her boyfriend, Will, a suspended sentence.  That's our sex justice system at work.  We know almost immediately that the judge is weird because he tells her to call him "Poopsie."

Then, strangely, fifty pages in, while Poopsie is enjoying Carrie, the story switches to a completely different plot, this being about a family with two sexually curious girls and their father, who is unable to deny them anything. Apparently it is this tale that Poopsie is thinking about during Carrie's visit. And he thinks about it for a very long time (sixty-two pages worth of time, to be exact). In that story is an important lesson: "She was proud of her body and had taught the children that complete nudity was something beautiful - that is, if the nude person was attractive" (page 100). That's an important distinction, and one that some nude sunbathers I once came across in Oregon failed to make. But yes, the daughters in the story get their mother involved, and it becomes a true family affair.  And at the end of that detour, we learn that Poopsie had enjoyed the sexual favors of the female members of the family after all had been arrested for incest.

And then on page 113, we return to our original tale.  The problem is, after more than fifty pages of a wild incest story, returning to the judge putting his large member in Carrie's behind isn't all that interesting. It's just too tame by comparison. The author must have realized this, for he has Poopsie ask Carrie to tell him the history of her sexual experiences, and some of those have incestuous tones. I'm not sure how reliable a narrator she is, however, for there is a discrepancy in her story. Early on she tells Poopsie, "I was twelve years old when my mother and father were killed in a car accident and Aunt Lucille and Uncle Will took me in" (page 124).  Then she describes several experiences, and how Aunt Lucille left, before saying, "Three weeks after that was my twelfth birthday. That evening I took my panties off and sat down in the overstuffed chair across from where Will was reading the paper" (page 163).  So can we trust anything she says?  It's probable that she's making up the whole thing.  And is that any kind of sex justice?

By the way, we never do learn which she enjoys more, intercourse or oral sex. Was Steve Novack leaving room for a sequel?

Posted by Michael Doherty at 12:46 PM