Shakespeare References in Everything I Know I Learned From Rock Stars 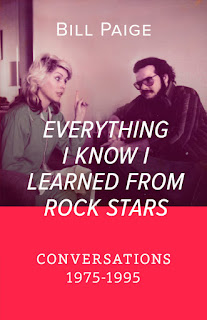 Bill Paige’s Everything I Know I Learned From Rock Stars: Conversations 1975 – 1995 contains two Shakespeare references. The first is in a piece about Karla DeVito. Paige writes: “Since graduating from Lincoln-Way in 1971, DeVito has appeared in a number of stage productions both in Chicago and New York. Godspell, El Grande de Coca-Cola, Jubilee (which she describes as ‘off, off-Broadway’), A Midsummer Night’s Dream (at New York’s Schaeffer Festival) and Gilbert & Sullivan’s The Pirates of Penzance (as Linda Ronstadt’s replacement on Broadway) all appear on her resume” (p. 245). And then in the piece on Richard Thompson, Paige writes, “Over the years, however, Thompson has suffered the slings and arrows of one particular group that perhaps fails to properly interpret his musical ravings” (p. 396). Obviously, the “slings and arrows” phrase refers to Hamlet’s famous soliloquy.