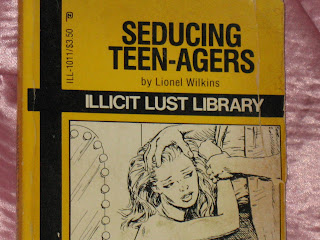 The title Seducing Teen-agers is a bit misleading.  It sounds like an instruction manual. It's not. Also, only one teenager is actually seduced. And then this novel basically tells the story of this one relationship.

Lou Jackson, having lost money gambling in Las Vegas, now heads home to his frumpy thirty-six-year-old wife. On his way back to Los Angeles, he picks up an attractive teenage hitchhiker named Wendy. "He had decided to fuck Wendy Caruthers, rape her if necessary, even if it meant ten years in jail" (page 13). And though Wendy makes it clear that she does not wish to be raped, she's not being entirely honest. "It was only when she had been truly overpowered that the guilt left her and, blameless, she could then enjoy the fucking she craved" (page 18). "More than anything in the world, Wendy hoped that this man had the stamina, would not be deterred by her ear-shattering screams nor (if he survived that) her gouging fingernails and sharp, clamping teeth" (page 18). Oh, the games women play. She wants to be raped so she can have sex without the guilt, but still fights him, scratching and screaming and hitting when she can. "Rape! Wonderful, blameless rape! she thought" (page 21).

The next morning Wendy remembers the thoughtful advice her mother had given her: "Marry rich or get yourself a sugar-daddy" (page 32). Lou, that morning, wants to be gentle - "he didn't want to startle her and have to rape her again" (page 39). He in fact offers to set her up in an apartment near a college and pay for her clothes and tuition and everything else in exchange for sex. Wendy of course accepts this generous offer, thanks to her mother's advice.

When Lou shows her the apartment building, author Lionel Wilkins writes, "Lou had to laugh to himself as Wendy scampered far ahead of him, taking in everything, like a curious and excited puppy. There was only one difference. Wendy was no puppy" (page 51).

He takes her shopping, and then when he's unloading the car, he's upset to see Wendy flirting with two boys. Wendy then realizes, "Yes, he was jealous. Was that because he loved her and when they fucked it was like a symphony or a waterfall or a sunset or a warm kitten? She loved kittens" (page 61). Clearly, she's a little crazy.

Not that Lou is the sanest of folks. When Wendy sucks his penis, he feels bad for his sperm, those "millions of terribly confused, misguided and duped swimmers with one mission in life who had failed - blown (that was a good one blown - muffed was even worse) their one big chance. He saw them frantically racing for an egg that didn't exist. Turn back! Turn back! their cries resounded, but of course it was too late and, worse, impossible. Ah, there was the perversity of it all, if it was perversity. No, of course it wasn't" (page 77).

But he also feels bad for his wife when he returns home. It's like has a conscience, and understands her predicament and feels guilty. He even begins to cry. And, what is perhaps more astounding, he has sex with his wife. "After all these years together, sex between them had become an intuitive matter, an orgasmic seance" (page 88).

Wendy goes to the doctor to get the Pill, and becomes so excited that her name briefly changes to Judy: "Judy thought of his tongue darting between her legs, then his bulging ram-rod fucking her while she lay shackled here on the table with her feet in the stirrups" (page 101). I've known this to happen to several women, and one woman I know got so excited she changed her name to Bill.

Wendy decides to study literature in college, and then she and her neighbor, Cynthia, talk about how they're the two sexiest girls in the apartment building. This leads, naturally, to the two of them having sex. "It was not a homosexual act, Wendy knew. Otherwise she would have felt guilt. No, it was an act of mutual adoration - a tribute to the perfection they recognized in each other's bodies" (page 119). Sure, sure. It was a homosexual act, of course. Wendy is not the brightest college student. "It was one of the first times Wendy had not felt guilty following sex" (page 120). Right, because she's in denial. She takes no responsibility for her actions, and is not honest with herself. Wendy is fucking mess.

And it's not long before she takes a male lover her own age. After having sex with Ted once, she decides she is love with him and "wanted to be his mate for the rest of her life" (page 151). Sounds a bit nuts, but this book actually has a happy ending for everyone.

Posted by Michael Doherty at 10:00 AM