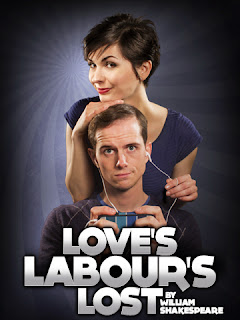 Love’s Labour’s Lost has always struck me as one of Shakespeare’s most interesting comedies. It has some obvious similarities with A Midsummer Night’s Dream, in as much as a group of less-than-effectual actors put on some entertainment for royalty in the Fifth Act, and they are interrupted and jibed during their performance by said royalty. But A Midsummer Night’s Dream ends with a wedding. Several weddings, actually. Love’s Labour’s Lost does not, though it seems to be heading in that direction for basically the entire play. As Berowne says, “Our wooing doth not end like an old play; Jack hath not Jill.” In fact, the end of the play brings some tragic news.

The Coeurage Theatre Company’s new production of Love’s Labour’s Lost, directed by Ted Barton, is being staged in the 2nd Stage Theatre in Hollywood. This is one of those small (49 seats) black box theatres that has a built-in intimacy. In fact, to get to the bathroom you have to cross the stage. However, there is a staircase in the upper stage right corner, opening the stage up a bit.

For the first scene, the set was quite simple – two small benches covered in black cloth, and something between them covered in burgundy cloth. And right away we get a mixture of classic and contemporary images when the four men (Ferdinand, Berowne, Longaville and Dumaine) enter the stage by descending the staircase. Two carry candles, while the others carry modern electronic devices including an iPad. The wardrobe is decidedly modern. The four men are dressed in jeans, dark shirts and glasses. All but Berowne wear button-down shirts; Berowne’s is slightly more casual, a black jersey, immediately setting him apart, if only subtly. (Later they lose the glasses and don suits.) When they sign their pledge to study for three years while abstaining from women, they do so by pushing a button on the iPad.

There is definitely a playful aspect to this production. Costard (Chris O’Brien) is dressed in a colorful costume, including green striped socks, sandals, shorts, a hat, and headphones. Constable Dull (Brian Abraham) is dressed in something resembling a safari outfit, with tan shirt and white hat. Both of those performances are quite good, though at times Costard strays into Jim Carrey territory (as during his reading of “Are you not the chief woman? You are the thickest here”). When Ferdinand (Jeremy Lelliott) proclaims that Costard will be in the custody of Don Armado, Costard fakes his death. And he sings his last line of the first scene – “sit thee down, sorrow” – after putting his headphones on (as if he’s singing along with the tune). Then later, when Berowne has that same line, he too sings it, referring back to Costard (a very nice touch).

There is a set change after that first scene, revealing an upper level and a trellis with vines and flowers. Also, the cloth is removed, showing a fountain with a statue of Cupid between the two benches. That statue is referred to often throughout the production, like in Berowne’s speech that ends Act III.

There is a lot of great humor in the scene with Armado (Jonas Barranca) and Moth (Ian Littleworth), particularly regarding the simple math problem. And when Moth mentions Samson, he jumps on Armado’s back on the line “on his back like a porter.” Elitia Daniels is perfect as Jaquenetta – adorable, flirtatious and funny. She’s particularly wonderful in Act IV Scene ii when she hears the letter.

When we meet the four women, they are all dressed in pale dresses and summer hats. Of the four women, the strongest is Sammi Smith as the Princess. Julianne Donelle is beautiful as Rosaline, but somehow lacks some of the spirit and spunk of that character. When the men enter to greet them, three of them are looking at their electronic devices (the exception, of course, being Berowne – one more way this production sets him apart).

Most of the cast is quite good, but certainly Michael Faulkner stands out as Berowne. It’s a character an actor can do a lot with, which sometimes can be dangerous as it can be easy to overdo it. But Faulkner does an excellent job in finding the humor without overselling it. Sometimes it can be a simple line that stands out, like his deliberate, slow (and very funny) reading of “Nay, then will I be gone” (Act II Scene i). He’s also wonderful in the scene when he asks Costard to deliver his letter. And in that famous speech from Act IV, I love his reading of “They are the books, the arts, the academes.”

Two other actors that stand out in this production are William Reinbold as Nathaniel and Patrick Wenk-Wolff as Holofernes. Reinbold is hilarious when saying “only sensible in the duller parts.” And Holofernes holds a small chalkboard, using it for the “sorel” bit, which ends up being a delicious bit of stage business.

There is also some great physical humor in the scene where it is revealed that all four men are in love, particularly on the part of Berowne and Ferdinand dropping their love letters and trying to retrieve them without being seen. John Klopping as Dumaine also gets a lot of laughs in that scene, as he reads his letter poorly, drawing odd looks from the other three.

The string of pearls that Maria receives is quite long, which is an interesting choice considering the Princess’s line, “Dost thou not wish in heart/The chain were longer and the letter short?” The women mask themselves with scarves and sunglasses. When the men arrive in the women’s camp disguised as Muscovites, they are dressed in black jackets and sunglasses, interestingly drawing something of a parallel to the first scene.

Most of the modern devices are dispensed with fairly early on, except for the headphones. Also, when Moth enters the third act singing, he sings his own version of the Sex Pistols’ “God Save The Queen.” And later there is a Star Wars reference, when a bit of the “Imperial March” is played on saxophone.

There is a nice, serious moment when Holofernes is mocked during the Worthies scene, preparing us for the serious end. The messenger appears behind the audience near the end, and so as a result the lights go up over the audience while the Princess receives the bad news. This is such an interesting choice, because the effect is that we have interrupted their fun. We are included in her sorrow, yet not in the group’s joy, for the lights go down again when Armado calls for a song.

The one element of this production that really didn’t work for me was the penis jokes. For example, during the Worthies section, Costard as Pompey makes the error of saying “Big” rather than “Great.” And on “Big,” he makes a reference to his penis size. These jokes always seem forced and out of place. (Though the snake in the pants bit worked.)

There is one short intermission, coming at the end of Act IV Scene ii. Love’s Labour’s Lost will run through November 10, 2013. The 2nd Stage Theatre is located at 6500 Santa Monica Blvd. (at Wilcox). Admission is on a pay-what-you-want basis.

Note: I also posted this review, in a slightly shorter form, on Pop Culture Beast.
Posted by Michael Doherty at 2:24 PM No comments: