Shakespeare Reference in Desires For Youth 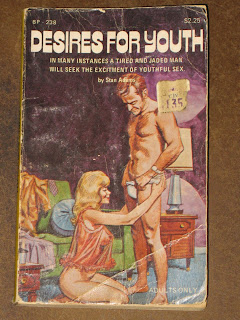 Oh yes, Shakespeare references pop up everywhere, including in Desires For Youth, a 1970s porn book by Stan Adams. This book is actually well written, particularly considering its genre, and it contains a humorous reference to The Comedy Of Errors. In a story in which a young man hopes to woo the family’s maid, Adams writes: “I got to her ass one day when there was no one in the house but the two of us. At the time I thought it was my big seduction scene, but now as I look back on it, it was more like a hilarious comedy of eros” (p. 123). What a surprising play with language!

Desires For Youth was published in 1976 by Aquarius 7 Publishers, and is part of the Bedroom Publications series.
Posted by Michael Doherty at 11:35 AM No comments: