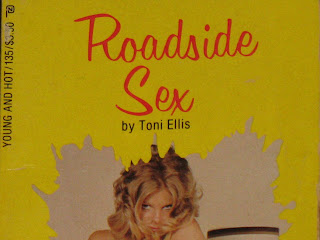 I love it when authors of adult books attempt to use vocabulary outside their range. It's not hard to appreciate what they're trying to do - elevate smut to poetry. Could it be considered a noble endeavor? Maybe. But the results can only be considered comedy.  Toni Ellis, the author of Roadside Sex, is clearly trying to write beyond his or her capability.  Check this out: "The female swimmer's long, dark hair jetted behind her like the undulating tail of some exotic, gorgeous fish. The girls naked, glistening shoulders trailed gracefully to the gentle slope of her back as she glided through the transparent water with ethereal gracefulness. Her back flowed flawlessly to the tiny hummock just below the twin round pert, firm swells of her naked buttocks which were alluringly complemented by the graceful swimmer's long, tapering legs" (page 9). Wow.

Anyway, Toni and Alicia are two young wives who are planning a cross-country hitchhiking trip, and need to ask their husbands for permission.  But first a telephone repairman is coming, and Alicia is naked.  "She had absently-mindedly left the door open" (page 15). Yes, "absently-mindedly." When the repairman arrives, he sees the "swift and amazed sight of Alicia's voluptuous tan form sweeping along the top of the staircase." I'm glad the wife is doing some sweeping, but shouldn't it be "amazing sight," not "amazed sight," especially as Alicia hasn't noticed his presence yet? The repairman "could not resist what Alicia represented for him, and that was womanhood in the most complete and irresistible form: nudity!" (page 15).

But he leaves without repairing anything, and the two couples have dinner. When it's time to broach the subject of the trip, author Toni Ellis writes, "Toni caught Alicia's attention with a swift, meaningful glance of her eyes" (page 21). As opposed to a glance of her kneecaps, I suppose.  This might be one of those situations where the writer is paid by the word, and needed an extra fifty or sixty bucks.  But you have to love phrases like "adulterously intimate contact" (page 38) and "kneeling ominously" (page 58).

Anyway, the girls' first ride is with two truckers who have set up a bedroom in their truck. Try to make sense of this sentence: "The redhaired trucker began to work his way slowly up Toni's naked torso, and soon his nose brushed against the nether flesh of her fully exposed breath and the feminine warmth emanating; from Toni's fleshy globe caused him to instinctively raise his free hand and powerfully paw the teenager's luscious tit" (page 41).  Can someone's breath have flesh? And can breath be "fully exposed"? And what's that semicolon doing there?

As confusing as that may be, it makes some sense next to this: "Mick's athletic power was no match for Alicia, and she finally found herself helplessly pinned beneath the youth's athletic weight as he straddled her waist" (page 43). Wait a moment. If his power is no match for hers, then she's the stronger. So why is she helplessly pinned?  Then a few pages later, Toni Ellis writes, "The bed began to rock with the increasing rhythm of Toni's jiggling buttocks and Toni noticed a definite change in her friend's breathing pattern: Toni's breath had modulated into a series of low, long inhalations and exhalations and tiny beads of sweat were beginning to form on her forehead" (page 46). Has Toni become her own friend? Has Alicia disappeared entirely?

Well, their husbands arrive at the truck, and one of them - Fred - insanely has a conversation with himself: "'What's the trouble?' Fred asked. 'Oh,' Fred replied, 'we saw your lights blinking on and off real fast'" (page 59). When Fred has finished his conversation, he and the other husband leave. The two wives escape to a rest area, and it is there they are reunited with their husbands. But it is also there that they encounter real trouble - a microbus full of sex-crazed dope-runners.  Uh-oh!  Alicia puts it nicely: "Sure, a little fun with the two truckers had been a little fun" (page 80). How can you argue with that?  But these new guys have already urinated on her and tied up her husband. And that's more than a little fun. That's a whole hell of a lot of fun.

The author also introduces the word "bullship" to the world (page 58), and though it hasn't quite caught on yet, I foresee a time when people will refer to all of Toni Ellis' writing as "bullship."
Posted by Michael Doherty at 3:27 PM