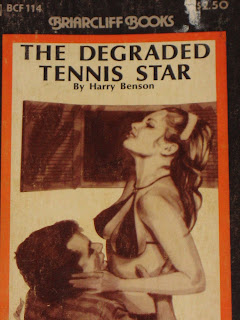 Who would have thought that in the foreword to an adult book, the publisher would mention Patty Hearst and the terrorism at the Olympic games? Well, this book did come out in 1978, so... Still, I was surprised.

In The Degraded Tennis Star, by Harry Benson, tennis star Jody Freedman wakes with a start, naked, in a vehicle, having no memory of how she got there. That's right, the book opens with her having already been kidnaped. When she meets her abductor, Bert Clemson, he tells her, "Baby, let me look at them two over-size, unfuzzy tennis balls on yer chest" (page 8). He's a witty one, that Bert, and he makes several more tennis references throughout the story.  At first it seems he's kidnaped her not for money, but for sex. When he shows her his penis, Jody "couldn't help it that her eyes were galvanized to his corrupt erection. She almost gagged as she saw the seep of clear oil from the mocking slot in the blunt tip" (page 13).  But later she learns, as do we, that she is being held so that she won't compete in a tennis tournament in Las Vegas. So it is a money thing, after all.

Striving for some originality, the writer gives us descriptions like this: "She could see the waltzing of his stomach muscles as he tensed them, compelling his gross testes to yo-yo in the thick sac that was now stretched smooth" (page 36). We also get great phrases like "boiling sex-cauldron" (page 86), "gobble my goop" (page 103), "my fuck-box is exploding" (page 149) and "fiery rectal furnace" (page 154).  By the way, if you have a fiery rectal furnace, it's really dangerous to put your fuck-box next to it. It will likely explode.

As is usual in these stories, the woman begins to enjoy being assaulted.  Jody then fondly remembers an incestuous moment with her uncle, who is also her business manager. So she's not as pure as we'd been led to believe.  If being kidnaped and raped wasn't bad enough, "Gradually, she began to realize that boredom was becoming a factor in her discontent" (page 55). Oh no!

There are many times that she could escape, but she doesn't. She even helps Bert after he is attacked by a bigger man. As an indirect result, she has to talk Bert out of burying her alive. By this point I had stopped caring about her. I don't have a lot of sympathy for the stupid.  To prove she's worth keeping alive, she goes down on him. "Clemson's groaning was loud and erratic as she flogged his obscene meat, milking sex-lubrication from the snake's eye in the blunt glans. Resigned to what she must do and with determination to do it and have it done with, she inhaled deeply and plunged her wide open mouth down on his fuck-sensitive shaft" (page 120).

She gets him so drunk that he passes out. But she doesn't leave then either. Instead, she tries to get some sleep, but can't. Harry Benson writes, "She was perplexed that her mind kept reviewing her situation" (page 125).  I'm perplexed that in all that reviewing she didn't think to walk out the door. Even when they meet two women and a teenage boy, she doesn't try to solicit their help in an escape. Instead she watches the teenager go down on his mother while she kisses the other woman.

So at the end when she shoots herself, is it really a tragedy?  No, it isn't.

Posted by Michael Doherty at 3:22 PM