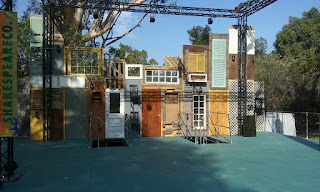 Summer in Los Angeles means free Shakespeare at Griffith Park. This year the Independent Shakespeare Company is putting on Measure For Measure and The Two Gentlemen Of Verona. Measure For Measure is one of my favorite Shakespeare plays on the page, but I hadn’t seen a live production before this one. My schedule this summer is nutty, leaving me just one day off between my Boston trip and starting a new job, and it was that day – July 5th – that I managed to catch a performance of Measure For Measure. Only now do I have time to actually sit down and write about it. Sorry for the delay.

The set had a deliberately hodgepodge yet sturdy look to it, with several doors, each painted a different color, with nothing matching, as if the whole thing had been put together over a long period of time with whatever materials had been available. Before the show, pop and rock tunes played at low volume over the speakers – songs like Electric Light Orchestra’s “Livin’ Thing” and “Can’t Get It Out Of My Head,” and Badfinger’s “Come And Get It.” As it got close to show time, several of the actors mingled with the audience. And then, just after 7 p.m., one of them announced, “Ladies and gentlemen, Mistress Overdone’s house of ill repute is open for business.” Immediately, a sort of party atmosphere was established, one which the audience felt a part of. The reading of the park rules was offered as a way to introduce the audience to the feel of Vienna, with the actors saying that the Duke lets the people get away with anything, but no smoking or photography during the performance. After the obligatory thanks to the sponsors, the show was underway.

Measure For Measure is considered to be one of Shakespeare’s tougher plays. It is a comedy that features characters who do rather despicable things. Particularly problematic is Duke Vicentio, here played by David Melville. At the beginning of the play, he bestows his power on Angelo, hoping that Angelo’s puritan nature will help put a stop to the general lawlessness of the citizens. But Vicentio doesn’t really leave, but rather disguises himself as a holy man and goes about manipulating the action. In the course of the play, he engages in questionable behavior. I found, in reading the play, that I did not like this character at all. However, David manages to show a playful side to his actions, and plays the role (at most points) for comedy, giving him a more human touch. When he tells Angelo, “There’s your commission,” he grabs his suitcase to hurry off, until Angelo stops him. Angelo (William Elsman) is immediately shown as uptight – by his wardrobe and posture, by the way he carries himself. And I appreciate that the production takes the time to show he is reluctant to take on the burdens of leadership. He is not a power-hungry man, and William Elsman does an excellent job of showing the character’s own conflict and turmoil with regards to his charge.

In this production, Mistress Overdone is played by a man (Xavi Moreno), which of course was the normal way it was done in Shakespeare’s day. But here – with the other female roles played by women – it gives the character an extra layer of playful bawdiness, a greater sense of anything goes, and a delightful sexuality. Those that enter with Overdone have a fun, loose feel, dressed in bright colors. Lucio (Nikhil Pai) is a bit foppish in his purple suit, stroking his walking stick. Many of this company’s productions will toss in modern references, usually done by the clown characters who are somewhat freed from constrictions anyway. In Measure For Measure, it is the clown Pompey (Lorenzo Gonzalez) who delivers these modern references, telling the audience that “What happens in Vienna no longer stays in Vienna.” He also makes references to CSI and Law And Order, and delivers a play on the song “Bad To The Bone,” as well as making references to Donald Trump. Interestingly, what seemed a modern reference – Vicentio telling the Friar that he is believed to be in Poland – is actually in the text (Donald Trump left for Poland the very day I saw this production). And again when Angelo says “This will last out a night in Russia,” what might seem to an added reference to Trump is actually part of the text. This play has a second goofy character, Elbow, the constable, here played delightfully by Richard Azurdia. His whole bit about choosing the wrong words, leading him to say he detests his wife, is done wonderfully.

Isabella is tough character to play. Is her purity and chastity something to be commended even if it means the death of her brother, or is she too cold, as Lucio says more than once? We can’t help but agree with Lucio the first time he tells her that, for she seems to have given up so easily in her suit for her brother’s life, saying “I had a brother then,” a line which I find funny. William Elsman is excellent in this scene, particularly in his reactions to Isabella’s “judge you as you are” and “Dress’d in a little brief authority,” showing us he is well aware of himself and his situation. And he tries to leave before bowing to his own attraction to her. His “Well, come to me tomorrow” is delivered with some affection. And his “What’s this? What’s this? Is this her fault or mine?” is funny and perfect. Lucio’s asides are shouted as encouragement to Isabella from the safe distance of the audience, a humorous touch.

But it is their next scene together where both Elsman as Angelo and Kalean Ung as Isabella really shine. In his soliloquy at the beginning of the scene, Elsman gives a slight pause before the word “pride,” as he doesn’t want to admit that, even to himself, but must. And when Isabella enters, we can plainly see Angelo’s struggle. This is important, if we are to continue to like this character. He gives a great delivery of “Or seem so craftily, that’s not good.” This scene is difficult, and both actors do an excellent job with it. Their performances and the way they approach the scene make it clear to the audience just how relevant this situation still is. And I love Kalean Ung’s reaction when her brother Claudio (Evan Lewis Smith) says “but to die, and go we know not where,” for it seems to her that he is questioning the very existence of an afterlife, one of her core beliefs.

One of the play’s big questions is just how Isabella reacts to the Duke’s marriage proposal. Shakespeare gives her no lines there, and that can be interpreted many ways. In this production, we see fairly early on the affection that Isabella has for the Duke as she speaks of him, so that the happy ending doesn’t come out of nowhere. Isabella is surprised at the Duke’s sudden suit, and is not given a chance to respond. Then, when he repeats his intentions, she accepts by silently, happily taking his hand. As for the bed trick, this production handles it quite well. First of all, April Fritz as Mariana is approximately the same height as Isabella, so it is believable that one might be mistaken for the other. And also, a short scene without dialogue is added, in which Mariana hands Angelo a blindfold, which he puts on before she leads him away.

Though a lot of this production is hilarious, I found that some of the more serious moments were among the best. As I mentioned, that scene between Isabella and Angelo was particularly noteworthy, with Elsman delivering an astounding performance.

There is one fifteen-minute intermission, coming partway through Act III Scene i, just after Isabella’s line, “Fare you well, good father.” And just before the end of intermission, some of the cast jokes a bit to allow folks time to get back to their seats. The performance ended at 9:47 p.m.
Posted by Michael Doherty at 1:48 PM 1 comment: