Shakespeare References in The Doonesbury Chronicles 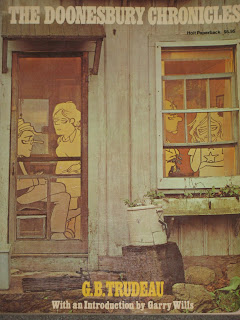 The Doonesbury Chronicles by G.B. Trudeau, a collection of the famous comic strip, contains a few Shakespeare references. Interestingly, they are all references to Hamlet. The first occurs in a strip where B.D. is in Vietnam. He shoots his pistol, and from off frame comes “A touch, I do confess it,” which of course is what Laertes says during his duel with Hamlet in the fifth act. The second comes when B.D. is back in the states, and Boopsie confesses that she is now working for McGovern. She tells him, “I know you’ll probably want to leave me, but B.D., I remember once reading somewhere, ‘To thy own self be true.’” That is a reference to Polonius’ advice to Laertes from Act I Scene iii, when he tells him, “This above all : to thine own self be true.” The third reference comes after Zonker tells Michael about his articulate plants. In one strip, Zonker says, “If you listen real closely, you might be able to hear Ed the geranium recite ‘Gunga Din’!” In the next strip, the plant says, “Alas, poor Gunga, I knew him well!” That, of course, is a reference to Hamlet’s famous lines from the first scene of Act V: “Alas, poor Yorick! I knew him, Horatio.”

The Doonesbury Chronicles was published in 1975 by Holt, Rinehart And Winston. 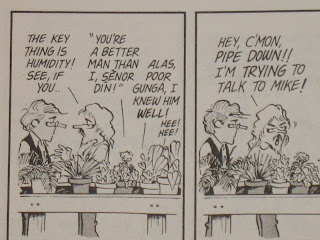 Posted by Michael Doherty at 8:46 PM No comments:

Shakespeare Reference in The Best Little Boy In The World 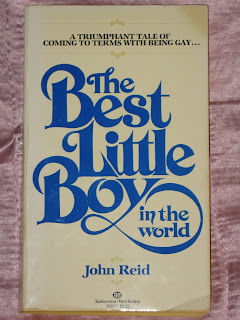 Andrew Tobias’ memoir The Best Little Boy In the World (published under the pseudonym John Reid) contains a reference to Hamlet. Reid writes, “You would never catch me electing art instead of science, playing Hamlet instead of tennis” (p. 31). The Best Little Boy In The World was originally published in 1973, then amended in 1976. The copy I read is from 1979, the fourth printing of the Ballantine Books edition.
Posted by Michael Doherty at 11:51 AM No comments: