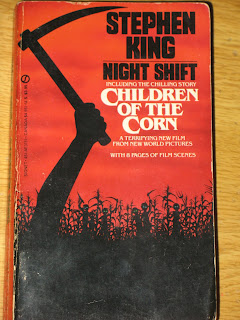 I recently revisited Stephen King’s Night Shift, a collection of short stories I hadn’t read since I was in my teens. And, yes, there is a Shakespeare reference. It comes in the story “The Mangler.” One character says, “If seven hundred monkeys typed for seven hundred years –” and another character finishes the thought, “One of them would turn out the works of Shakespeare” (p. 82).

There is something wonderful about Twelfth Night, something inherently enjoyable about this play. There is a light, breezy quality to it, and no matter what troubles occur, we are never really worried about the fate of any character, not even Antonio when he is captured. And seeing a daytime performance of this play at Will Geer’s Theatricum Botanicum in particular is a treat, for it is an outdoor venue in a beautiful natural setting, where actors make occasional entrances from the surrounding woods. There is also a musical quality to the play, even outside its several songs, and it is this element that the current production of Twelfth Night stresses, with characters singing many of the lines.

When the play opens, there is a mourning party off slightly in the woods, singing a dirge. It is to them that Valentine is sent on behalf of Orsino, an added moment that is referred to in the text but not usually shown. Orsino (Max Lawrence) then sings the famous first line of the play, “If music be the food of love, play on!” He is taking part in the song, rather than just enjoying it. Viola and the Captain enter from behind the audience, and the bulk of their scene together is performed on the roof of the structure back there, placing the audience firmly in Illyria, since they are looking over us when speaking the scene’s first lines, a nice touch. Willow Geer has a delightful and endearing energy as Viola right from the start, and her playful delivery of the line “He was a bachelor then” indicates that she is already interested in Orsino, or at least curious about him. Viola sings the line, “For I can sing,/And speak to him in many sorts of music,” which works well and highlights for the audience the fact that music is a strong current running through the play. It makes sense, too, that Toby (Christopher W. Jones) would have a song on his tongue, showing his somewhat carefree lifestyle. He sings his lines about drinking to his niece. And for Sir Andrew Aguecheek’s part, he is really excited to demonstrate his dancing skills, such as they are, a funny moment.

Orsino and his men are in uniforms of blue, white and red. This production, by the way, takes place in the early 1800s. When Viola enters disguised as Cesario, she wears a similar but not identical outfit to the men. No wig or hat is employed for her disguise, but rather her hair is pulled back in a ponytail, which is interesting, for it really is just the clothes that make her a man. It is almost as if she hopes Orsino will see right through her disguise, that she wishes to be wooed by him. And Willow Geer makes it work really well. It is also interesting to me that different characters sing for different reasons. Obviously, bursting into song is a conceit and in Orsino’s case, it is a bit of putting on airs, of playing the part of being in love with Olivia (for of course we all know he will soon be in love with Viola). Thus, he sings his line, “O, then unfold the passion of my love,” with the other men working as his backup singers.

Feste (Time Winters) is dressed in a fool’s cap, and even has jingling bells. He is an instantly lovable character in this production. The oddest bit of casting is Melora Marshall as Malvolio. A female Malvolio changes things quite a bit, particularly as the character then becomes gay, something that wouldn’t be a problem in a modern setting, but something that doesn’t quite work when set in the early 1800s. After all, Toby, Maria and the others accept her sexuality as a given, never making mention of it. It becomes more than just crossing a boundary of class for Malvolio, as she tries to rise above her station; it’s a whole other boundary being crossed, which would have been much more serious at that time than now. Malvolio is dressed in black, like her mistress Olivia; the other gentlewomen are dressed in lighter colors. This shows immediately that Malvolio is working to be close to Olivia and to be firmly in her favor. When Viola enters disguised as Cesario, all of the women (including Malvolio) don black veils, leading to her question about which is the lady of the house. Christine Breihan is wonderful as Olivia in this scene. I love that she pauses before asking “Is’t not well done?” It is as if she is waiting for a compliment, perhaps used to getting them. And she is adorable in her excitement after Viola exits.

Malvolio has a whistle, which she blows often, as when chasing down Viola. She places Olivia’s ring on the ground rather than tossing it at her. Viola is excellent in that moment when she realizes that Olivia loves her, and she gives a great and funny delivery of “What will become of this?” That speech is one of her best, in a performance that is full of wonderful work. I’ve always been fond of Toby as a character, and Christopher W. Jones delivers a really good performance in the role. I particularly like his work in the scene when he asks Feste for a love song, especially the way he is affected by the song. I also enjoy the moment when he mimics Malvolio later in the scene, humorously duplicating her walk. But again, the plan concocted by Maria seems a little odd in light of Malvolio’s gender. Clearly, they are all aware of Malvolio’s sexuality, which in the early 1800s seems unlikely. And it also might come across a bit like they are poking fun at her because of her sexual orientation and not just because of her haughty airs. Don’t get me wrong: Melora Marshall’s performance as Malvolio is excellent. It is just that the character as a woman doesn’t quite work.

The character Fabian is cut, and Feste instead takes part in the gulling of Malvolio. He and the others hide behind branches that they hold, as they wait for Malvolio to find the letter. The gentlewomen also take part in the fun, or at least are there to witness it, they too using branches to conceal themselves. The letter, by the way, is on red paper and cut in the shape of a heart, which is cute. And this scene gives Malvolio a chance to sing, for she finally has joy. She sings the lines contained in the letter. Because Feste is present instead of Fabian, at the end of the scene he remains on stage, and Viola enters to begin Act III. Olivia now has cast off her mourning garb and is clad in a light purple dress for her meeting with Viola, showing she is ready and eager to move on. And again, because Fabian is cut, Feste takes his part in Act III Scene ii, saying lines that don’t really fit with his character. And later, it is strange to hear him say Fabian’s line “If this were play’d upon a stage now, I could condemn it as an improbably fiction.” When Maria enters, she takes great joy in telling the others of Malvolio’s state, and her joy is infectious. We in the audience are as eager to follow her as are Toby and the others. Malvolio comes dancing in from the woods off stage left, and again sings the lines about “greatness,” this time to Olivia.

There has long been some question regarding Antonio’s affection for Sebastian, and whether there is a sexual attraction there. Interestingly, this production dispenses with that question with one gesture by Antonio. After handing Sebastian his purse, he says “Haply your eye shall light upon some toy/You have desire to purchase.” On the word “toy,” Antonio creates the outline of a woman’s body. It is interesting that in a production that has made Malvolio a lesbian, it also makes Antonio clearly straight. It is also a bit strange that Antonio is essentially giving Sebastian money for a prostitute. The duel scene between Viola and Andrew is delightful. And even before that, I love that when Toby is reading Andrew’s written challenge to Viola (or, rather, to Cesario), Andrew joins in, having memorized what he’d written and being quite proud of it. Toby is excellent as he tells Viola of Andrew’s intentions. With Fabian cut, however, it is left to Feste to pretend to hold back Viola, which seems somewhat out of character. But the fight is hilarious, with each reluctant combatant covering his or her eyes. And the following moment between Sebastian and Andrew is great as well.

Feste’s delivery of the word “brains” in the line “Nay, I’ll never believe a madman till I see his brains” brings to mind the movie The Return Of The Living Dead. The final scene of the play moves at a brisk pace, with plenty of wonderful work from the cast. When Antonio says “adverse town,” he directs it out, as if at all of us in the audience, a nice touch, particularly as it reminds us of the beginning when Viola sees the audience as the town. Olivia has another excellent moment when delivering the line “Hast thou forgot thyself? Is it so long?” And her complete delight on the line “Most wonderful” is perfect. Andrew is wonderful when he runs in from the woods, and when delivering the line “You broke my head for nothing.” The entire company sings the final song rather than just Feste. Even Malvolio enters near the end of the song, albeit somewhat reluctantly. So the production ends with a celebration, leaving the audience with good cheer.

This production of Twelfth Night was directed by Ellen Geer, and runs through September 28th. Visit the Will Geer’s Theatricum Botanicum website for the complete schedule. There is one fifteen-minute intermission, which comes at the end of Act III Scene i. Including intermission, the performance runs approximately two and a half hours.
Posted by Michael Doherty at 3:31 PM No comments: