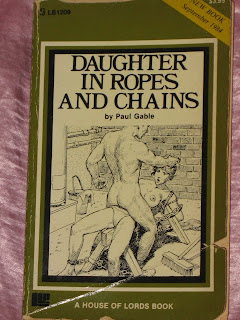 It begins with typical teenager Anne Fielding spying on her mother, Kathy, who is having some nice bondage-related sex with Gus, the high school janitor.  It's nice to think that school janitors have a bit of fun outside their miserable jobs. Anne gets quite turned on, of course, watching her mother being willingly abused. So Anne masturbates, and discovers something new about herself.

In school Anne has the hots for fellow student David Granger, and so is excited when he takes her down to the janitor's room to fool around. He pushes her toward a cot (Janitors do live at the school after all!), and she weakly protests. Paul Gable writes, "A warm trickle that felt like a stream of melting butter oozed down her inner thighs" (p. 26). That indicates she really likes David. As things get hotter, Gable writes, "The room spun around, growing blurry while her ass rolled back in her head" (pp. 35-36). I'm no prude, but it's difficult for me to imagine the position they must have been in for her ass to roll back in her head. And how large a head, or small an ass?  Either way, it's an amazing bit of love-making.

Gus and another man, Frank (who turns out to be a second janitor), catch the end of the show.  Gus is understandably upset that his home has been invaded by teenagers, especially as he was clearly having company. So he has Frank gag Anne with David's underwear. And Gus burns Anne with his cigarette while demanding the names of other teenagers who have been in his home.  Apparently Gus' little apartment in the school's basement doesn't have a bathroom, for he uses Anne as a toilet.

I love that this book uses the word "rutting," a word I just recently learned from William Shakespeare's Pericles, Prince Of Tyre (Shakespeare uses it in Act IV Scene v), so clearly Daughter In Ropes And Chains is literature. Here is its use of the word: "She was rutting, rutting the way her whorish mother had the other night, twisting like a slut in heat while that man, that horrid man, was tormenting her with that knife" (page 60).  Then on page 63, Gable writes, "He was going to fuck her the way he had fucked her mother!"  It's interesting how much excitement Anne gets from thinking of her mom (and watching her mom in the earlier scene). There's a lot more going on here than Anne realizes.

Anne doesn't return to school for a few days, but her mom goes to see Gus. When she arrives, she is surprised to find Frank there.  And though three days have passed, for Gus it was like no time had passed at all, for he says, "Almost as good as that little bitch we fucked today in school" (p. 92).  After having their way with Kathy, they go through her purse and find a photo of Anne.  So they take pleasure in letting Kathy know she has a few things in common with her daughter. And then Frank goes to Kathy's home to retrieve Anne.  Soon both mother and daughter are being tortured, and Kathy finds herself turned on watching her daughter being tormented.  So, yes, they do have more in common than they probably previously expected.

The book leaves us with the impression that this experience has brought Anne and Kathy closer together than they'd ever been before.

Daughter In Ropes And Chains is A House Of Lords Book, published by Oakmore Enterprises, Inc.

Posted by Michael Doherty at 1:07 PM