Shakespeare References in Portrait Of A Killer 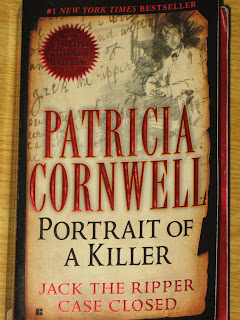 In Portrait Of A Killer: Jack The Ripper Case Closed, author Patricia Cornwell claims to prove that artist Walter Sickert was the notorious killer. She doesn’t make a very convincing case, and takes a long time to not make it. But along the way, there are several Shakespeare references. The first is a mention of Henry The Fifth: “As a boy, Sickert frequently sketched men in uniforms and armor. As Mr. Nemo, the actor, his most critically acclaimed performance was in 1880, when he played a French soldier in Shakespeare’s Henry V” (p. 23). A little later, Cornwell writes: “When Walter was a bit older, after the family had moved to England in 1868, he began recruiting friends and siblings to play scenes from Shakespeare, and some of his stage direction was nasty and degrading” (p. 47). She then quotes an unpublished memoir from Sickert’s sister: “I must have been a child when [Walter] roped us in to rehearse the three witches to his Macbeth in a disused quarry near Newquay, which innocently I thought was really called ‘The Pit of Achaeron.’ Here he drilled us very severely. I was made (being appropriately thin and red-haired) to discard my dress & shoes & stockings, in order to brood over the witches cauldron, or stride around it, regardless of thorns and sharp stones, in my eyes the acrid smoke of scorching seaweed” (p. 47).

There are a couple of references to Hamlet. Cornwell writes, “In 1881, he tagged along with Ellen Terry as she hit the shops of Regent Street in search of gowns for her role as Ophelia at the Lyceum” (p. 63). And then: “In most productions of Shakespeare’s Hamlet, the ghost enters and exits through the trap. Sickert probably knew far more about stage traps than sewer traps. In 1881, he played the ghost in Henry Irving’s Hamlet at the Lyceum Theater. The dark shape at the figure’s feet in Sickert’s painting could be a theater trap. It could be a sewer trap” (p. 68).

Patricia Cornwell even claims that the name Jack The Ripper comes from Shakespeare: “Sickert could have come up with the name ‘Jack the Ripper’ by reading Shakespeare. As Helena Sickert said in her memoirs, when she and her brothers were growing up, they were all ‘Shakespeare mad,’ and Sickert was known to quote long passages of Shakespeare. Throughout his life he loved to stand up at dinner parties and deliver Shakespearean soliloquies. The word Jack is found in Coriolanus, The Merchant of Venice, and Cymbeline. Shakespeare doesn’t use the word ripper, but there are variations of it in King John and Macbeth” (pages 112-113).

Apparently, there was (still is?) a pub called the Merry Wives of Windsor. Cornwell writes: “One day, a wretched-looking woman, having the appearance of a tramp, appeared at the Merry Wives of Windsor public house and inquired about Chapman” (p. 147). She mentions it again: “The woman at the door of the Merry Wives of Windsor informed the tramp that Mr. Chapman had died on Christmas day” (p. 147). There is another mention of Henry The Fifth: “In one of the earliest existing Sickert letters, one he wrote in 1880 to historian and biographer T.E. Pemberton, he described playing an ‘old man’ in Henry V while on tour in Birmingham. ‘It is the part I like best of all,’ he wrote” (p. 154).

Regarding a guest book that Patricia Cornwell believes was vandalized by Jack The Ripper, she writes, “The page is filled in with scribbles and comments and allusions to Shakespeare, most of it crude and snide” (p. 264). There is another mention of Hamlet: “I don’t know where Sickert spent his holidays, but I suspect he would have wanted to be in London on the last Saturday of the year, December 29th, when Hamlet opened at the Lyceum, starring Henry Irving and Ellen Terry” (pages 279-280). Regarding Sickert’s wife, and the similarities she might have seen between Sickert and her father, Cornwell writes, “He loved Shakespeare, Byron, Irving and Cooper” (p. 306).

Portrait Of A Killer: Jack The Ripper Case Closed was published in 2002. The copy I read was the Berkley mass-market edition, published in 2003.
Posted by Michael Doherty at 9:50 AM No comments: