Shakespeare references are everywhere. I've said before that if you consider yourself a film buff, you absolutely must read (at the very least) Hamlet and Romeo And Juliet. There are so many references to those two plays in movies that without knowledge of those works there is no way you can fully enjoy cinema.  Seriously.  That also extends to cinema magazines.  In the Spring 2010 issue of Screen Actor (the magazine for SAG members), there is a reference to Hamlet. A section about performance capture technology is titled, "The Play's The Thing: Aspects Of Performance Capture Draw Analogies To Theatre" (page 26). 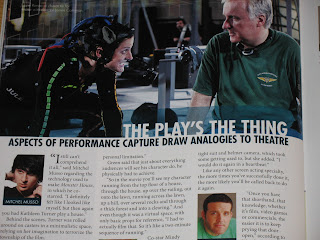 The Autumn 2012 issue of Oregon Quarterly (the University Of Oregon magazine) has two Shakespeare references, both to the famous "To be or not to be" speech from Hamlet. In an article titled "From Here To China" about Asian cinema, Robert K. Elder writes, "Fans had little idea the band was fake until the film debuted, followed by a media storm of slings and arrows...and then accolades" (page 39). This obviously refers to the lines, "Whether 'tis nobler in the mind to suffer/The slings and arrows of outrageous fortune" from Act III Scene i. Later in that same article, Elder begins a paragraph with the line, "So there's the rub" (page 40), which is a reference to a line from that same speech: "To sleep? perchance to dream. Ay, there's the rub." 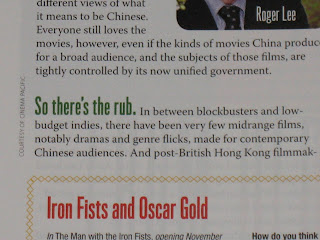 The March 1993 issue of Writer's Digest has a couple of Shakespeare references.  The first is a cartoon, which says "From an assertiveness-training class production of Hamlet." And then it depicts Hamlet saying, "I'll be. Period" (page 7). See photo. 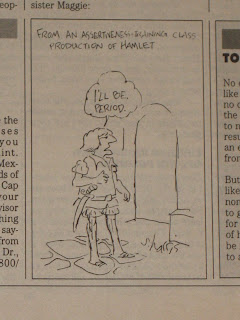 The second is from the monthly Writer's Digest writing challenge (page 20), this one about liberating female literary characters. The example given is rewriting of Shakespeare's The Taming Of The Shrew. See photo. 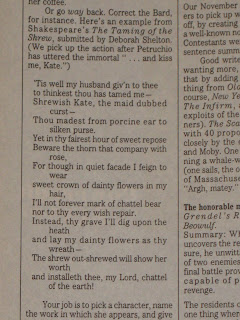 Posted by Michael Doherty at 1:02 PM