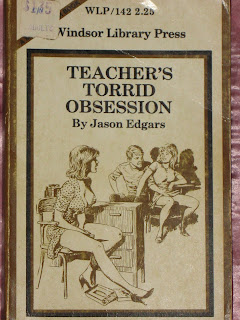 When June Wilson was fifteen, she lost her virginity "to a common delivery boy, a kid from the wrong side of the tracks" (page 6). Her parents reacted rather strongly - "In terror they had left their little town in Massachusetts, never to return, lest their prudish friends find out about June's obscene escapade" (page 7).

Now at age twenty-eight, she still thinks of that boy, not being attracted to men her own age. Well, good thing she got a job as a teacher. And with all the money she makes at her teaching job, she buys an expensive sports car and some new clothes and goes to Indiana to find a boy. This is really a story of the American Dream.

She picks up a rugged-looking teenage hitchhiker named Joey. "He also thought she was the hottest-assed bitch he had ever played around with, with the possible exception of his sisters" (page 44). Joey then invites her to his home so she can have sex with the rest of his family. (I used to pick up hitchhikers fairly regularly, and this rarely happened to me.)

When she meets Joey's mother, she figures her to be about her own age. But if Joey is sixteen, and his mother is June's age, that means she was twelve when she gave birth to Joey. Does June teach math? Later the author writes, about June, "She was built more like a girl of twenty-five than a woman of nearly forty" (page 70). Did June age a decade on her trip? That's one long, hot summer.

After having sex with Joey and Joey's parents, June begins thinking of Joey's younger siblings. "She no longer felt any real shame about her desire for young cocks. But it was difficult, as a matter of form, to transform her wishes into realities. After all, she thought, one just doesn't ask two loving parents for their children's sexual favors" (page 75). Fortunately, the parents suddenly have to drive into town, and June's "cunt was coming alive like a furry little animal stirring after a nap" (page 76).  That works well because Joey "wanted to sniff around in the hair of her twat like a puppy looking for something tasty in the grass" (page 92).

The family's home includes a room with a giant bath tub "sunk into the middle of the floor and surrounded by a circle of benches upholstered in thick fur" (page 104). (I have to remember this for when I can afford a house of my own.)  They also have a small theatre with fur-covered seats, for one of the sons, Ron, is studying to be an actor. He puts on a show with a whip, and has June come on stage. Soon the whole family is on stage, and this is the kind of theatre anyone would enjoy.

But soon June leaves this family after they tell her of a couple of friends of theirs who run a school in Key West. There she is greeted by a sixteen-year-old houseboy and a fifteen-year-old maid. It's tough to find good help, but these two get right to work on making June comfortable.

Posted by Michael Doherty at 10:00 AM