Shakespeare References in Magazines (The New Yorker, Westways, The Writer)


In the January 11, 1993 issue of The New Yorker, there is a Shakespeare reference. In a long piece titled “A Lost Childhood,” author Susan Sheehan includes a Shakespeare reference. Sheehan writes, “Crystal didn’t do her homework, but once, when she was assigned by an English teacher to read a play of Shakespeare’s (‘That language was too much of a drag, there was too many complications,’ she says), she went to a movie theatre to see ‘Macbeth’ instead. ‘I remember witches and a witch killed a man or a man killed a witch,’ she says. ‘It was O.K., but it was corny. It was nothing like as good as “The Wizard of Oz”’” (Page 65).

In the March/April 2013 issue of Westways, there is an article about Utah. In the small section of things to do there, the writer includes this: “The Utah Shakespeare Festival (June 24-October 19) ranks among the world’s best” (page 31).

The June 2001 issue of The Writer has a couple of references to Shakespeare. The first is in a profile piece on writer Sherman Alexie. Alexie is quoted as saying, “Every theme, every story, every tragedy that exists in literature takes place in my little community. Hamlet takes place on my reservation daily. King Lear takes place on my reservation daily. It’s a powerful place. I’m never going to run out of stories” (page 29). Part of that quotation is included again on page 30 (see photo). The second Shakespeare reference is simply a mention of a famous bookstore in Paris: “Shakespeare and Company in Paris, a refuge for Hemingway and other Lost Generation members, comes quickly to mind” (page 52). 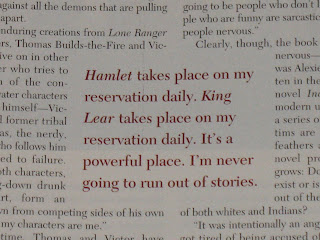 In the August 2007 issue of The Writer there is a reference to Shakespeare. In a short piece on Abraham Lincoln, Chuck Leddy writes: “Books were scarce during Lincoln’s childhood, but when he got his hands on one, he devoured it, copying out passages by hand and memorizing them. Thus, the cadences and vocabulary of the Bible and Shakespeare flowed deep within him.”

The August 2008 issue of The Writer also contains references to Shakespeare. In an article titled “How to create emotional landscapes,” Marilyn Taylor writes, “For example, no one could mistake Shakespeare’s tone when he wrote, ‘A horse, a horse, my kingdom for a horse!’” In the next paragraph, Taylor writes, “Shakespeare, of course, could easily have had his King Richard mumble, ‘I’d really like to have a horse right now’” (Page 15). Then in a piece titled “Make Your Readers Stick Around,” John Edward Ames writes, “Shakespeare claimed he ‘never blotted a line,’ while Gustave Flaubert didn’t stop polishing the manuscript until his publishers pried it from his ink-stained fingers” (page 34).

Posted by Michael Doherty at 2:48 PM No comments:


Last week’s issue of LA Weekly had a couple of Shakespeare references. In the section titled “GO LA,” for theatre for May 13th it says, “The Play’s the Thing” (page 30). That’s obviously a reference to Hamlet’s line from the end of Act II: “The play’s the thing/Wherein I’ll catch the conscience of the king.”

Then, on the next page, is a little blurb about a screening of Valley Girl. The first line is, “Valley Girl, the Romeo and Juliet of the ‘80s, was released 30 bitchin’ years ago last month” (page 31).

(There may very well be more Shakespeare references in this issue. I didn’t read the entire thing.)
Posted by Michael Doherty at 2:42 PM No comments: