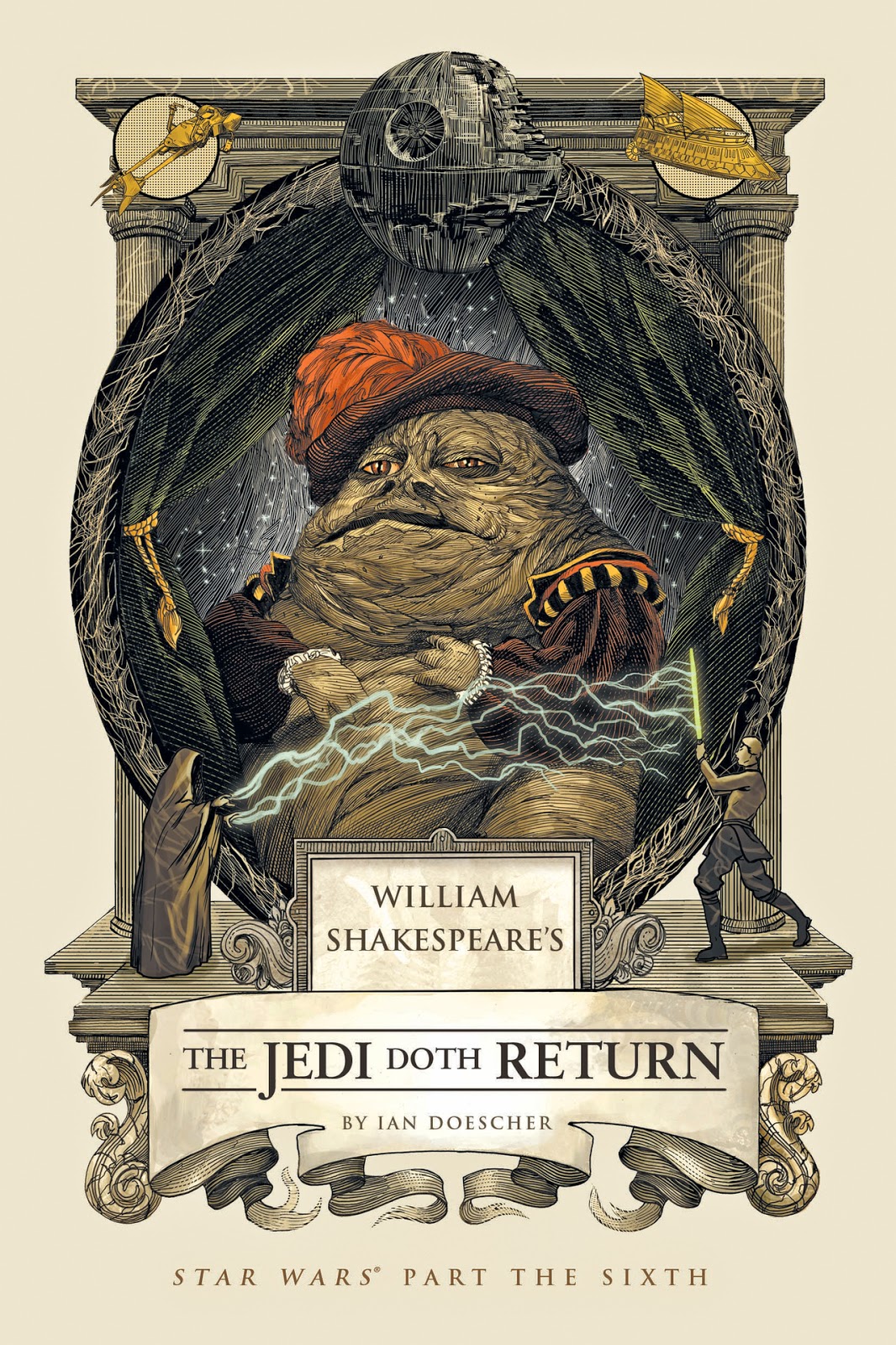 As with the first two books, this one is divided into five acts, and presents the film’s opening crawl as a Shakespearean sonnet, told by the Chorus in prologue. When C-3PO knocks on the gate of Jabba’s palace, the droid that answers acts the part of the Porter from Macbeth, a delightful and humorous touch. His speech is much shorter than the Porter’s, and begins: “Now here’s a knocking, indeed! If a droid/Were porter of the Force here in this place,/He should have rust for lack of turning key” (p. 14). Compare those lines with the opening lines of the Porter’s speech: “Here’s a knocking, indeed! If a man were porter of hell-gate he should have old turning the key.”

Salacious Crumb acts the part of a Fool, but also has lines that refer to Hamlet. As when he says, “A little more than dud and less than dead” (p. 18), a play on Hamlet’s “A little more than kin and less than kind.” Or when he says, “A Solo may make progress through the guts/Of Banthas!” (p. 27), a play on Hamlet’s “Nothing, but to show you how a king may go a progress through the guts of a beggar.” There are several Hamlet references throughout the book. Yoda’s last line is Hamlet’s last line, but slightly inverted, the way Yoda speaks: “The rest silence is” (p. 56). And then Luke follows with a variation of Horatio’s line: “Good night, sweet Jedi” (p. 56), and then refers to the famous soliloquy: “These are the pains that human life doth bring,/The heartache and the thousand nat’ral shocks/That flesh is heir to” (p. 57). Vader takes a line from that same soliloquy: “’Tis a consummation/Devoutly to be wish’d” (p. 99). And then a little later uses another of Hamlet’s big speeches: “O what a rogue and peasant Sith am I” (p. 102). The Emperor does a bit from Hamlet’s “What a piece of work is a man” speech: “O what a piece of work we are! I should/Find joy in our humanity, and yet,/To me, what is this quintessence of dust?” (p. 115). Leia and Luke do a bit of the dialogue between Polonius and Hamlet, when Leia asks, “I prithee, say: what is the matter, Luke?” and Luke responds, “Between who?” (p. 95). Han Solo, in an aside, refers to Hamlet: “This Lando doth protest too much, methinks” (p. 67). Even the Rancor Keeper refers to Hamlet: “O that this too, too sullied flesh would melt/Into oblivion, if I without/my pet belov’d must live” (p. 33). It’s interesting, as a side note, that Doescher chooses the “sullied flesh” reading rather than “solid flesh.” The Rancor Keeper also uses a little of Richard The Third, saying: “Was ever rancor in this humor rais’d?/Was ever rancor in this humor won?” (p. 34).

Luke refers to Hamlet when he says, “Here is the battle grand: the skiff’s the thing/Wherein I’ll catch Han’s rescue and take wing” (p. 37). He also refers to Hamlet after Anakin has died: “And flights of Jedi sing thee to thy rest” (p. 152). And when Luke attacks Boba Fett, Fett says, “A hit, a very palpable hit!” (p. 40). Ian Doescher used that reference in William Shakespeare’s The Empire Striketh Back, Star Wars Part The Fifth also. But then again Return Of The Jedi reused many of the elements of the first Star Wars film: a Death Star, Tatooine, Chewbacca presented as a prisoner, Luke and Leia swinging together to safety, and so on. And some references seem a bit forced, such as Boushh’s line, “O true decryptionist, thy codes are quick!” (p. 25), a play on Romeo’s line, “O true apothecary,/Thy drugs are quick.” And there is a bit too much of characters saying what they’re doing. Like Luke saying, “Now I jump aboard/His bike” (p. 76), and then “I shoot, and one is dead” (p. 77), and then “He comes a’blasting, but my lightsaber/Deflects the shots, and now I slice his bike!” (p. 78).

Luke makes a cute reference to The Tempest: “Yet is such stuff as droids are made of” (p. 52) (referring to Prospero’s “we are such stuff/As dreams are made on” from Act IV of that play). And he later refers to the play again, when upon seeing the Ewoks he remarks, “O brave new world, that has such creatures in’t!” (p. 86) (referring to Miranda’s line near the end of the play). Han, upon seeing Leia, exclaims, “O mistress mine, to see thee brings me joy,” a nod to a song from Twelfth Night. And when C-3PO tells the tale of the rebellion to the Ewoks, he borrows from Jaques’ seven ages of man speech from As You Like It: “All the world’s at war/And all the rebels in it are the heroes;/They have their battles and their skirmishes,/And rebels in these scenes have play’d their parts,/Their story being seven ages” (p. 92). Darth Vader refers to Othello just before deciding to go against the Emperor: “It is the cause, it is the cause, my soul” (p. 144). Lando refers to Julius Caesar when he says, “Shall they ascend and with a rebel’s voice/Cry ‘Havoc!’ and let slip the dogs of war!” (p. 148).

In William Shakespeare’s The Empire Striketh Back, Star Wars Part The Fifth, the ugnaughts sang. In this book, the Rancor gets a song. Why not? Han also sings when he learns Luke is not a rival for Leia’s affections. And Luke takes the tale of Oedipus and gives it to a Tusken Raider (p. 61). Wedge gets a nice long aside to the audience.

By the way, in an aside, Obi-Wan mentions the midi-chlorians, a subject that raises the ire of many fans. And it seems Ian Doescher acknowledges that in the lines, “’Twas well I spoke/Not of the midi-chlorians to Luke,/For then he would have endless questions still” (p. 58). Exactly, like, “What the hell were you thinking, George Lucas?”

William Shakespeare’s The Jedi Doth Return, Star Wars Part The Sixth was published in 2014, and features illustrations by Nicolas Delort.
Posted by Michael Doherty at 2:48 PM