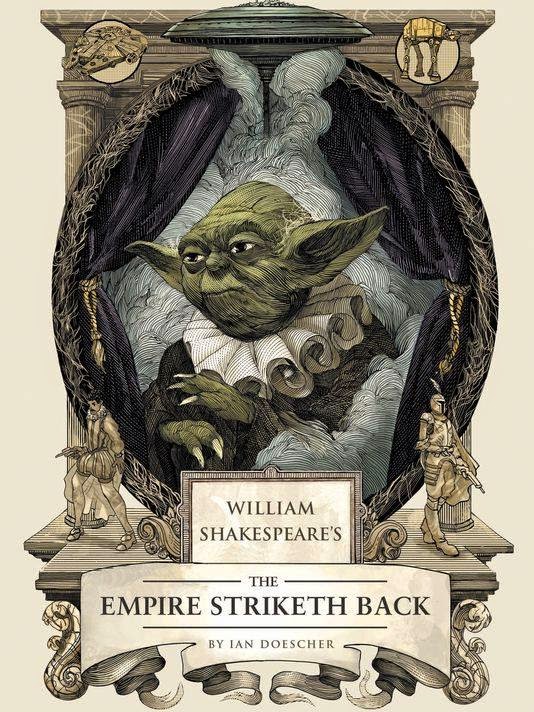 As in the first book, the opening crawl is done as a sonnet by the Chorus in prologue. The first line of Act I, “If flurries be the food of quests, snow on” is a play on that famous first line of Twelfth Night, “If music be the food of love, play on.” Luke Skywalker is given a soliloquy before getting to the first line of the film. The Wampa has a nice long aside which will remind you of the Lion in the Mechanicals’ play in Act V of A Midsummer Night’s Dream. The Wampa’s first lines are: “You viewers all, whose gentle hears do fear/The smallest womp rat creeping on the floor” (p. 12). Compare those to these lines from A Midsummer Night’s Dream: “You, ladies, you, whose gentle hearts do fear/The smallest monstrous mouse that creeps on the floor.” And when Luke exits the stage at the end of the first scene, the stage direction is “Exit, pursued by a wampa,” a delightful reference to that famous direction in The Winter’s Tale: “Exit, pursued by a bear.”

Han Solo becomes something of a poet in this telling of the tale, and it’s wonderful to have him advise himself, “But soft you now” (p. 20). And after they kiss, Leia quotes Juliet, saying, “He kisses by the book” (p. 75). Han also takes on the role of Puck when trying to outmaneuver the Imperial fighters, saying, “Now watch, you Empire vile, how I do fly!/First up and down, aye, up and down, this Han/Will lead them up and down” (p. 57). Interestingly, his friend Lando also quotes Puck: “Give me your hand, good Sir, if we be friends,/And Lando shall, in time, restore amends” (p. 159). This is a nice touch, as the film trilogy itself draws parallels between Han and Lando.

One of the strangest associations in this book is that of Darth Vader with Shylock from The Merchant Of Venice. At one point, Vader says: “Hath not a Sith such feelings, heart, and soul,/As any Jedi Knight did e’er possess?/If you prick us, do we not bleed? If you/Blast us, shall we not injur’d be? If you/Assault with lightsaber, do we not die?” (pages 34-35). It’s really funny, though I’m not sure if Jews will appreciate the comparison with Sith Lords. The speech Vader is drawing from is from Act III Scene i: “Hath not a Jew eyes? hath not a Jew hands, organs, dimensions, senses, affections, passions? fed with the same food, hurt with the same weapons, subject to the same diseases, healed by the same means, warmed and cooled by the same winter and summer, as a Christian is? If you prick us, do we not bleed? if you tickle us, do we not laugh? if you poison us, do we not die?” It’s interesting that Shakespeare wrote this as prose, while in the Star Wars book it is presented in verse.

When Leia is giving instructions to the rebel pilots on Hoth, she says, “Pray, screw your courage to the sticking place,” as Lady Macbeth said to her husband when he was having second thoughts about their murderous plans. Leia, at one point, mentions the Gungans, which is odd: “And how, like Gungans sinking in the swamp,/Our enemies do fall behind us, slain” (p. 59).

In this telling, not only does the Wampa get to speak asides, but the AT-ATs themselves have dialogue. And when the rebels attack the AT-ATs, Luke says: “A hit! A very palpable hit” (p. 46), a reference to Osric’s line during Hamlet’s duel. Even the space slug gets a speech.

As I mentioned, most of the characters speak in verse. Yoda, however, does not. He speaks in haiku, which of course is not Shakespearean. But the author explains his choice in the afterword. And Boba Fett speaks in prose. And the Ugnaughts sing! Twice! As there are three of them, we are reminded of the three witches in Macbeth. Chewbacca and Leia also sing a song. When Leia sings, it might remind you of when Leia sang in The Star Wars Holiday Special, but it should also bring to mind Desdemona, as Leia sings, “He my seiz’d lov’d one, I his strife,/Sing wroshyr, wroshyr, wroshyr.” Also, there is an amusing conversation between two Bespin guards included, which Star Wars fans should appreciate, as it’s about chasms being required by the Empire for all major structures.

And there are several references to Romeo And Juliet. One of the funniest is when C-3PO says to R2-D2, “Parting is such sweet sorrow/That I shall say farewell till thou hast left.” R2, in an aside, comments, “No poet he, indeed./Alas, it seems that romance is not one/Of 3PO’s six million forms of speech.” And at the end, the Chorus uses the Prince’s final speech: “A glooming peace this morning with it brings,/No shine of starry light or planet’s glow” (p. 163). That speech has another witty moment, as the Chorus says, “Till we, by George, a brighter play compose,” a reference to George Lucas, the creator of the Star Wars saga.
Posted by Michael Doherty at 6:02 PM