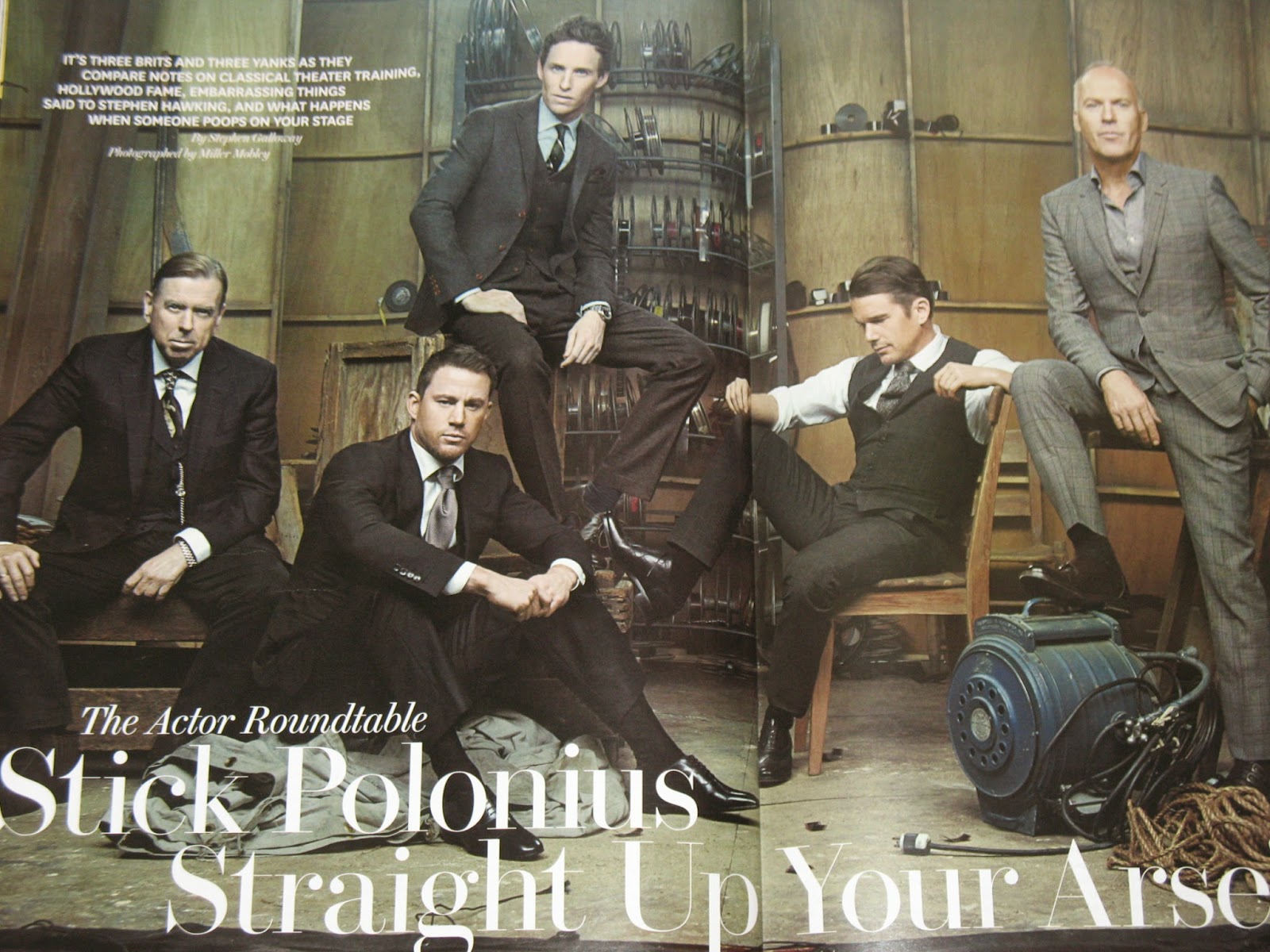 The December 12, 2014 issue of The Hollywood Reporter has a piece titled “Stick Polonius Straight Up Your Arse” (beginning on page 60). In this piece, several actors talk about their craft and experience. Benedict Cumberbatch says: “My first-ever teacher taught me extraordinary truth by literally line-reading Shakespeare at me, so I can read it like prose” (p. 63). He then says: “I great up doing a lot of stuff at school. I went from playing Titania, queen of the fairies, [in A Midsummer Night’s Dream] and Rosalind in As You Like It to playing Willy Loman [in Death of a Salesman] at age 17” (pages 63-64). Eddie Redmayne is then asked, “What’s the most difficult character you’ve played?” Redmayne answers: “My first professional play, playing Viola in Twelfth Night opposite Mark Rylance. Having had that experience, being able to play people so far from who you are, gives you a sense of where you can go” (p. 64). It is Timothy Spall who utters the line which gives this piece its title: “That’s a load of balls because most people, if they were given a play or a part in a Hollywood movie, would jump at it and they’d say, ‘You can stick Polonius straight up your arse’” (p. 64). And then later Cumberbatch is asked, “Do you have a role model whose career you emulate?” He responds: “We talked before the tape was running about Stephen Dillane’s Hamlet when I was 17. That had a massive impact on me – the sort of essential, quiet, still truth of what he did. Nobody else was Hamlet but him.” Ethan Hawke then says, “And then you saw mine!” Redmayne then says to Spall: “I’ve never said this to you, Tim, but when I was a kid, one of the first things I saw was A Midsummer Night’s Dream at The National Theatre. Tim was playing Bottom, and it was all set in mud and there was a contortionist playing Puck, this woman.” Spall then comments: “I had a French-Canadian contortionist on my back when I was trying to do Shakespearean comedy. And it felt like hell. You’d go backstage and there were people wearing verruca socks, which are worn [to prevent] plantar warts, you know? It was in a massive pile of water, and one day somebody came in and said, ‘You’ve not heard the latest. Someone’s done a poo in the mud.’ I said, ‘What are you talking about? I’m lying in that before the audience comes in!’ I went to the stage doorkeeper who had been there for years, wonderful woman. I said, ‘You’ll never guess what I’ve just heard. You know the fairies who are all diving around in the mud? Someone’s done a poo in it.’ She said, ‘Oh, we’ve had a phantom shitter at the Royal National Theatre for years’” (p. 66).

An extra edition of Variety published in December of 2014 has an article that touches of an actor’s experience in acting Shakespeare. In “The Actors: Oscar Isaac and Gugu Mbatha-Raw,” Mbatha-Raw says: “In my first job, I played Celia in ‘As You Like It’ in an open-air production. It was an amazing experience.” Isaac asks, “But you also did ‘Romeo And Juliet,’ right?” Mbatha-Raw answers: “So that was about a year later, which was incredible. I actually really miss that character – just such a great emotional journey.” Isaac says, “I did it in Shakespeare in the Park in New York.” Mbatha-Raw asks, “Were you Romeo?” Isaac answers: “Yeah. Thankless role.” Mbatha-Raw says: “I feel like Juliet is kind of the more satisfying role, in a way. I loved doing it, but she’s just so constant and fixed and boundless in her emotions. And it’s just funny because the Prince Charming role, he’s always kind of a blank. But what Shakespeare does fantastically is he makes him very flawed. And he switches very quickly and he’s very immature, much like guys are. But I loved doing it” (p. 18).
Posted by Michael Doherty at 4:52 PM