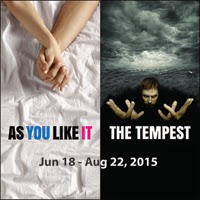 Summer is coming and that means free Shakespeare performances in various parks throughout Los Angeles. Of course, it’s not free for these companies to put on these productions. This summer Shakespeare By The Sea will be performing two of Shakespeare’s plays, As You Like It and The Tempest, and are now trying to raise the funds necessary to put on these performances. Each year, Shakespeare By The Sea performs a couple of Shakespeare’s works in several parks throughout the area. This year, performances are planned for Encino, Hermosa Beach, Irvine, Long Beach, Manhattan Beach, Torrance, Woodland Hills, and other areas, from June 19 through August 22. The company’s goal is to raise the funds before the opening of the season. To help do this, they are offering two incentives:

Visit Shakespeare By The Sea’s official website for more information.

And here is the link to my review of last year's production of Hamlet.
Posted by Michael Doherty at 5:12 PM