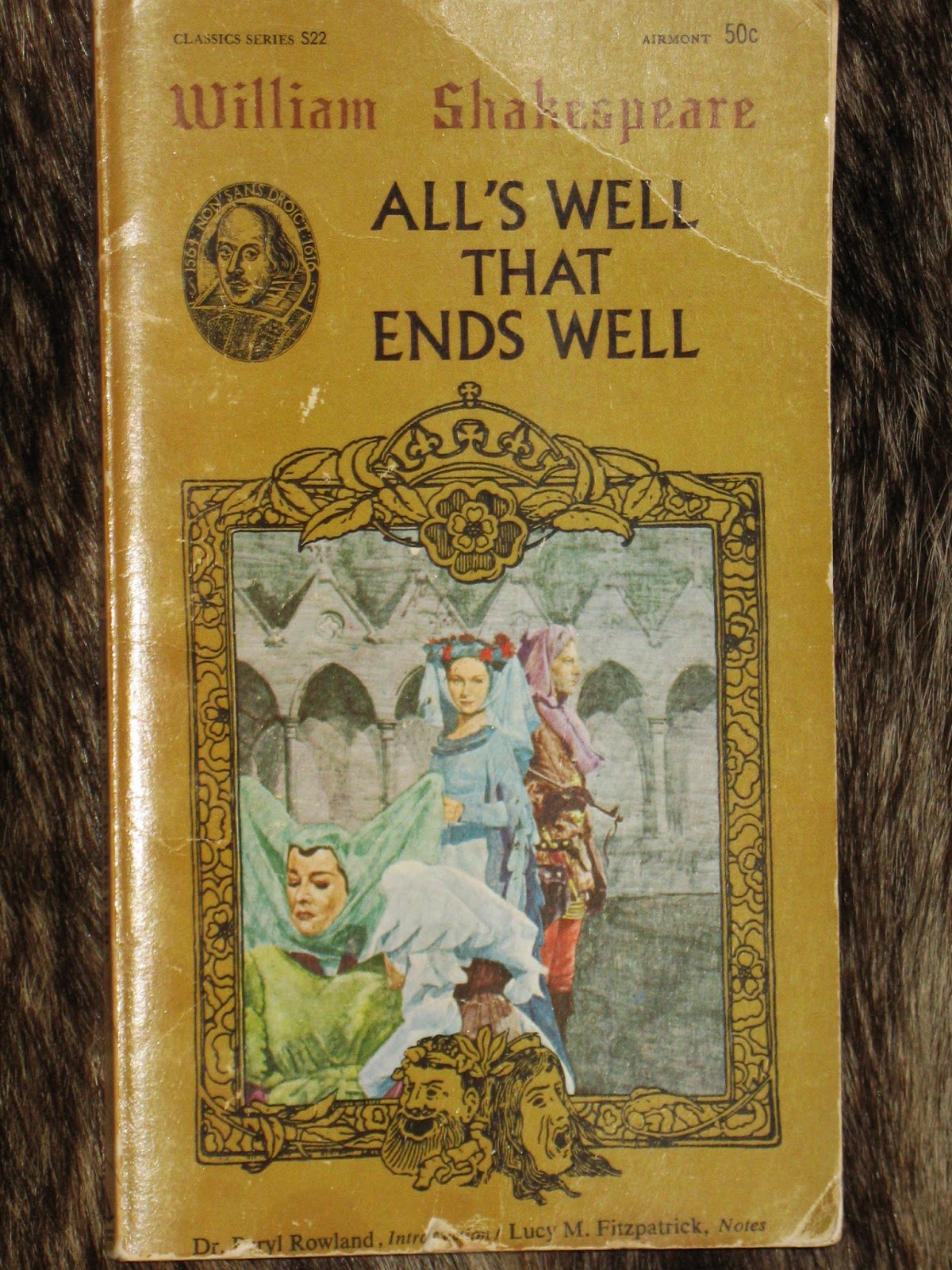 A friend had given me an old copy of All’s Well That Ends Well published in 1968 by Airmont Publishing Company, and I finally had a chance to read it. This edition was edited by Dr. Beryl Rowland, who also wrote the introduction. There is another peculiar credit, however: “Notes edited by Lucy Mabry Fitzpatrick.” So I guess the editor didn’t write the footnotes.

This volume is part of the Airmont Shakespeare Classics Series, and also includes a general introduction by David G. Pitt, of Memorial University of Newfoundland. Pitt gives a bit of background of Shakespeare’s life and times, as well as information on the theatre at the time, with a description of The Globe.

Rowland, Associate Professor at York University in Toronto, writes: “The date of the play is uncertain. Francis Meres in 1598 referred to a play by Shakespeare entitled Love’s Labour’s Wonne and the idea that this was an early working of All’s Well persisted until this century without any firm evidence to support it. Attempts to date the play on internal historical allusions, borrowings from contemporary works, similarities in mood, theme, action or treatment of characters between it and other plays by Shakespeare, or on the basis of language and metrical patterns have proved inconclusive” (pages vii-viii). Regarding the story, Rowland writes: “The problems of moral alignment are enhanced rather than minimized by Shakespeares’s alterations. In the source, the man whom the heroine chooses is socially so much her superior that even the King is reluctant to approve. In Shakespeare’s version, the King minimizes the importance of any social discrepancy; Bertram’s subsequent dishonesty, his callous rejection of the woman whom he thinks he has seduced are new; Bertram’s affaire seems more reprehensible in that the ring which he barters for his pleasure is not simply an item of  value but the very symbol of the honor of his ancient family” (p. viii).

About Bertram, Rowland writes: “But it must be noted that until his encounter with Helena at court, Bertram seems to be an admirable if immature young man. He inspires the affection of others, speaks with propriety and is commendably anxious to involve himself in the excitement of war. When he protests at being chosen as Helena’s husband, his initial remonstrance is reasonable” (p. x). Rowland adds: “There is little evidence to suggest that he is under the evil influence of Parolles, although his friends wish to think so. His attitude towards him at times approaches that of master to clown” (p. x).

Toward the end of the introduction, Rowland writes: “To an Elizabethan audience, believing in the reality of the descent of grace upon a sinning human, the play is concerned with Christian forgiveness. As such, it is structurally and thematically related Much Ado About Nothing, Cymbeline and The Winter’s Tale: the sin is the failure to trust in love. The rejected woman appears to die; the denouement of forgiveness comes when she is found to be alive and the man who has wronged her acknowledges his error” (p. xiii).

In this volume, a short description of the action precedes each act. There are no line numbers. Notes are the bottom of each page. While my other edition has “jackanapes” as one word, this edition has it as “jack-an-apes,” and the footnote reads: “jackanapes; monkey; literally, a Jack (monkey or ape) from Naples, Italy” (p. 78). This edition has Diana’s line from Act IV Scene ii as “I see that men makes ropes in such a scarr,” and the footnote for “scarr” is “snare (?)” (p. 96). My other edition has the lines as “I see that men make rope’s in such a scarre,” and the note reads, “This line is hopelessly corrupt.” Helena says, “All’s well that ends well” twice, once in Act IV Scene iv and once in Act V Scene i. In this edition, the line is italicized and each word is capitalized except “that,” as if she is aware of speaking the play’s title.
Posted by Michael Doherty at 4:51 PM