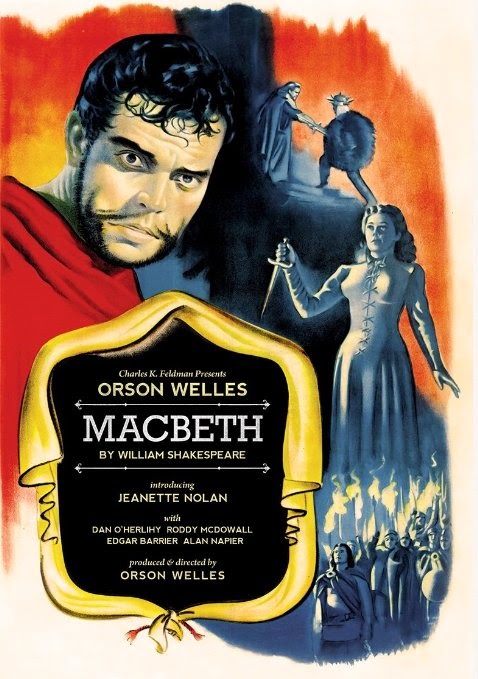 Orson Welles’ 1948 film version of Macbeth is in black and white, and stars Orson Welles, Jeanette Nolan, Roddy McDowell, Dan O’Herlihy and Edgar Barrier. It’s a moody piece, playing with shadows and interesting camera angles and close-ups to give the audience an unsettling feeling. There are some strange, unfortunate cuts in the text, as well as some drastic reordering of scenes and speeches.

The film opens with the Witches on a rock cliff, but their first line is “Double, double, toil and trouble” from Act IV Scene i. And as we hear them mention the ingredients, we see interesting close-ups of the cauldron. Then the film goes to the first line of the play, “When shall we three meet again?” The Witches pull a figurine from the cauldron, which is to represent Macbeth. After “There to meet with Macbeth,” the film goes to its opening credits sequence.

After the credits, we see Macbeth (Orson Welles) and Banquo (Edgar Barrier) riding, and we hear “By the pricking of my thumbs, something wicked this way comes” from Act IV Scene i. But then Macbeth says, “So foul and fair a day I have no seen,” from Act I Scene iii (thus cutting Scene ii entirely), and the Witches hail him. They hold the figurine, and put a crown on it when they say Macbeth shall be king. The Witches’ faces are in shadows, making them even creepier and more mysterious. Macbeth’s aside, “If good, why do I yield to that suggestion,” is done as voice over, Macbeth’s thoughts to himself, rather than spoken to camera. But it is done with him in extreme close-up.

Then, oddly, we have a scene of Macbeth dictating his letter to Lady Macbeth. So it is Macbeth we hear speaking these lines, not Lady Macbeth. Then Banquo enters and we return to Act I Scene iii, with Macbeth asking Banquo “Do you not hope your children should be kings?” The scribe strangely speaks some of Banquo’s lines (“Win us with honest trifles”). And then Macbeth continues to dictate the letter, with Banquo there. At the end of the letter, we hear Lady Macbeth’s voice as well, and we go to Act I Scene v. Her lines are then done as voice over.

While Macbeth rushes home to Lady Macbeth (Jeanette Nolan), and into her arms, the film also shows us the previous Thane of Cawdor’s execution. It’s interesting, for it graphically links Macbeth with the doom of his predecessor, linking Macbeth with death. Then when the king and his men all arrive at the castle, a religious service is held before they even greet each other. Then we go into Act I Scene iv, with Duncan asking, “My son, is execution done on Cawdor?” (The “My son” part is not in the original text.) It’s interesting, because it makes Lady Macbeth present for speeches she doesn’t hear in the play.

Macbeth is present for the beginning of Act II Scene i, hearing Banquo and Fleance. Macbeth says, “I think not of them,” but cut are his following lines, so we lose the sense of friendship between them. The film goes right to “Good repose, the while!” The film gives us a shot of Lady Macbeth in Duncan’s chamber. The “dagger” speech is also done as voice over. Then when Lady Macbeth enters, the film goes back to Act I Scene vii, with Macbeth saying “We will proceed no further in this business.” After Lady Macbeth convinces him to proceed, the bell rings, and we’re back in Act II Scene i, with “Hear it not, Duncan.” As Macbeth walks away to do the deed, Lady Macbeth speaks the opening speech of Scene ii, and this one is not in voice over. After the deed, Macbeth oddly speaks some lines from Scene iii: “Had I but died an hour before…,” delivering them to Lady Macbeth. And so they’re given as truly indicating regret, rather than possibly being for show to the other men. Then Lady Macbeth says, “Go get some water.”

Most of the Porter’s speech is cut. Lady Macduff (Peggy Webber) is added to the scene where everyone is woken, saying “Husband” just before Macduff says “O horror! horror! horror!” Donalbain is cut, so Duncan has just one son. Yet the lines about two being lodged together are left in. And some of the lines between Donalbain and Malcolm are reassigned, in a scene with Macduff (Dan O’Herlihy), Malcolm (Roddy McDowell) and Lady Macduff. It seems Macduff leaves his wife that very night.

Banquo’s opening speech of Act III is spoken to Macbeth, which is completely insane, for then he’s directly accusing Macbeth, who is now king, of murder. It’s like he’s asking or daring Macbeth to kill him. This is a terrible choice, and a big problem. And then a few lines cut from Act II Scene i are inserted here. Then the film goes to Act III Scene ii (“scorch’d the snake”), and back to Scene i for the “fruitless crown” speech, which Macbeth delivers to Lady Macbeth. And then Lady Macbeth goes back to Scene ii (“What’s done is done”). Macbeth follows that with lines from Act II Scene ii, the “Macbeth does murder sleep” speech. This reordering of the play is a bit confounding.

After a brief scene with the Witches, we see Macbeth with the crown on for the first time. But Macbeth angrily says, “To be thus is nothing, but to be safely thus” (from Act III Scene i), frightening Lady Macbeth. Then – in another insane reordering of scenes – the film goes to the beginning of Act IV Scene ii, but instead of to Ross, it is to Lady Macbeth that Lady Macduff asks, “What had he done to make him fly the land?” So Lady Macbeth offers some comfort to Lady Macduff? That’s far afield of the play. Macbeth wants the people to believe Macduff and Malcolm committed the murder, as he gives his “strange invention” line from Act III Scene i. And it is from his position on the throne that Macbeth addresses Banquo, asking if he’ll go riding this afternoon. But Banquo should expect something from Macbeth since he so brazenly accused him in this version. There is a wonderful unspoken moment between Lady Macbeth and Macbeth before the murderers enter. And after they do enter, Lady Macbeth looks at them, then makes her exit, which is nice. The third murderer is cut. At the banquet, the lines about there not being a seat are cut. Interestingly, when Macbeth sees Banquo’s ghost, he sees no one else. The other chairs are all empty in those shots, as if those people are no longer real. Scenes v and vi are cut.

Act IV begins with Macbeth’s line, “How now, you secret, black, and midnight hags.” The Witches don’t physically appear, and the first line we hear from them is the First Apparition’s line warning Macbeth to beware Macduff. As we hear the apparitions, we see Macbeth in the middle of the screen, lit, but surrounded by darkness, and seeming small. And as Macbeth’s confidence returns, the camera pushes slowly in on him so that he once again dominates the screen, a nice touch. The line of kings is cut.

Act IV Scene iii begins with Macduff’s first lines, but here they are spoken by Malcolm. And then many lines are cut, skipping to “I think our country sinks beneath the yoke.” And then everything is cut until Ross enters. So gone is all of Malcolm’s testing of Macduff, which makes sense, since in this version those two ran off together. But it’s a shame to lose basically that whole scene. Ross’ line “I have said” is cut.

Act V begins with Scene ii, the line “How does the tyrant?” At the beginning of Scene iii, we see people fleeing Macbeth’s castle. Macbeth walks over to Lady Macbeth’s bed to ask the Doctor how his patient is. And so Lady Macbeth hears that speech.

The film gives us a couple of shots of the men cutting down the trees, and then a nice shot of the army approaching from the mist. Then we finally get the sleepwalking scene, Act V Scene i. Lady Macbeth sings the line “The Thane of Fife had a wife.” Interestingly, after her line “There’s knocking at the gate,” she stumbles toward the camera, and Macbeth enters camera left to take hold of her. She says “To bed, to bed” gently, as if she’s almost aware of his presence. And then she does come to, in his arms, looks at him, and runs off, screaming. It’s interesting, because it makes Macbeth seem more directly responsible for her demise. After more shots of the army approaching, we actually see Lady Macbeth’s death. Macbeth’s great “Tomorrow and tomorrow and tomorrow” speech is done as voice over.

The DVD contains no special features.
Posted by Michael Doherty at 12:29 PM