Dianetics: The Evolution Of A Science – A Cult Classic 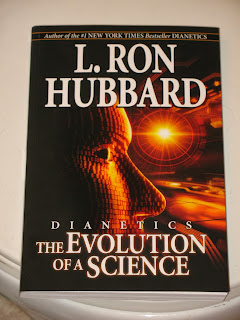 L. Ron Hubbard was a busy boy in the 1950s, creating his cult and winning that bet with Robert Heinlein. Dianetics: The Evolution Of A Science is a thin volume in which he describes just how he came up with some of these wild ideas. By the way, if it’s a science, then why does it have tax-exempt status? I suppose that’s a question for the Internal Revenue Service, and one I’d like them to answer.

At the beginning of the book L. says that if the reader gets confused, it’s because there was a word he or she did not understand. It’s an interesting tactic, a pre-emptive strike of sorts. If this book confuses someone, it’s that person’s fault, not that of the writer. Well, I am certainly at fault then. This book has something to do with hypnotism and insanity and memory and pain, but who really knows? It’s mostly stream-of-consciousness, repetitive gibberish, the kind Scientologists spend their lives pretending to decode.

L. writes: “We knew WHAT Man was doing. He was surviving. Somehow, some way, he occasionally became irrational. Where did hypnotism fit into this?” (p. 26). L. is basically going on about his own journey, the quest to create some kind of religion to sell. He writes: “We look for some demons, one way or another. And we found some! This was a discovery almost as mad as some of the patients on hand. But the thing to do was try to measure and classify demons. Strange work for an engineer and mathematician! But it was found that the demons could be classified” (p. 27). Sure.

Then: “The demons, since none of them consented to present themselves for a proper examination as demons, were, it was concluded, installed in the brain in the same way one would install a new circuit in the optimum brain. But as there was just so much brain, it was obvious that these electronic demons were using parts of the optimum brain and that they were no more competent than the optimum brain inherently was. This was more postulating. All one wanted was a good result. If this hadn’t worked, something else would have been tried” (p. 28). It’s difficult to get demons to step in off of Hollywood Blvd. and subject themselves to Scientology testing. But then L. writes, “There are no demons” (p. 28). So that’s why they wouldn’t come in. Makes sense to me. Maybe anyone who does not present themselves for a proper examination doesn’t actually exist.

Anyway, L. then goes into his usual bit about the aberrated people being miserable, and Scientology being the only helpful tool in getting folks back to their basic, good personalities, their “optimum brain.” “Somehow the exterior world gets interior. The individual becomes possessed of some unknowns which set up circuits against his consent, the individual is aberrated and is less able to survive” (p. 35). “How did the exterior world become an interior aberration?” (p. 36). Throughout the book, L. comes up with insane questions, then describes the insane process through which he came to his insane conclusions. It’s actually interesting. That is, it’s interesting to follow the process of someone inventing bullshit. That’s basically what he’s doing – letting us know how he came up with these notions. It’s like he’s testing out ideas, but including all of the testing in a book rather than just the outcome. And this makes sense too, because he has to have a large number of books to sell to the cult members to keep them interested and to keep the money flowing in.

Here is an example of L. working out this bullshit: “Very well, let’s take the mind itself, the optimum mind. Compare it to itself. When did Man become sentient? It’s not absolutely necessary to the problem or these results to know just when or where Man began to think, but let’s compare him to his fellow mammals. What does he have that the other mammals don’t have? What can he do that they can’t do? What does he have that they have?” (p. 46). Then he adds, “All it takes is the right question.” Of course, and if you fill a book with various ridiculous questions, perhaps one of them will be right. Why not? L. then says that after millions of years of evolution, man’s brain should be incapable of making mistakes. And yet some people join Scientology.

L. admits to some pretty screwed up methods. “So I pinched a few patients and made them pretend they had moved back to the moment of the pinch. And it hurt them again. And one young man, who cared a great deal about science and not much about his physical being, volunteered for a nice, heavy knock-out. And I took him back to it and he recalled it” (p. 41). Doesn’t that make you want to join Scientology? He said he was trying to prove that memories of pain would be the strongest memories. It must have been fun to be a part of these early experiments. (Again, L. is calling it science, not religion. IRS folks, are you paying attention? Taxing the fuck out of Scientology would help put California back on its feet.)

L. certainly had his way with his so-called “patients.” He conducted some experiments to see if man still had the same responses to pain that fish have. He writes: “Drug him with ether and hurt him. Then give him a whiff of ether and he gets nervous. Start to put him out and he begins to fight. Other experiments all gave the same conclusion” (p. 68). Did people volunteer for this? Well, either way, they certainly contributed to the greater good of humanity. After all, where would we be without L.’s enlightening work on the reactive mind and engrams and red-tab banks and all that?

Again, I have to wonder just how this pseudo-science was granted tax-exempt status. Seriously. Or are we to suppose all religions conduct experiments on people? L. writes, “Someday somebody may cut off a chunk of brain and cry ‘Eureka, this is the reactive mind!’” (p. 84). Yes, you’re probably thinking it’s best not to volunteer for any more of these religious experiments.

L. writes that our memory banks “contain a complete color-video record of a person’s whole life, no matter the demon circuits” (p. 60), and that “There is no inaccuracy in the banks” (p. 61). He then makes one of his wonderful claims (a claim that is impossible to prove or disprove, simply because everything about it has been invented): “But a ‘memory’ in the red-tab bank, when properly approached by Dianetic technique, will vanish out of that bank entirely” (p. 77). L. continues: “For instance, a man who supposes that the whole world was ugly and sordid is guided through therapy. The aberration which made the world seem ugly and sordid folds up when the engram or engrams to that effect deintensify and refile” (p. 78). Oh yes, “Dianetics can break up habits, simply by relieving the engrams which command them” (p. 80).

Watch out! It turns out that “Engrams are contagious” (p. 91) L. explains: “Papa has an engram. He beats mother into anaten. She now has an engram, word for word, from him. The child was anaten, maybe booted aside and knocked out. The child is part of mother’s perceptics for that engram. Mother dramatizes the engram on the child. The child has the engram. He dramatizes it on another child. When adulthood is attained, the engram is dramatized over and over. Contagion” (p. 91). Makes sense? It seems that L. is really into the idea of knocking people out. In scenario after scenario someone is knocked out. In this scenario, it’s the child who was booted aside. Remember, this was the 1950s, and in those days people were knocked out easily with just one punch. You see it all the time in films and television programs that document the period.

You don’t just have engrams to watch out for. There are also locks. L. writes, “A lock is a situation of mental anguish” (p. 93). “I discovered that any patient I had, had thousands upon thousands of locks – enough to keep me busy forever” (p. 94). And that’s why folks aren’t permitted to leave Scientology. L. writes: “Then began the most persistent search possible to find the earliest engram in any patient. This was mad work. Utterly weird” (p. 95). You don’t say? Well, no argument from me, L. He says you have to find the earliest engram, which apparently is usually twenty-four hours after conception. Utterly weird, indeed, and also completely unbelievable. What is also utterly weird is that there are people out there who believe this stuff. Weird and frightening.

They believe that Scientology helps the aberrees. And who, you might ask, is an aberree? L. asks that question: “Who is an aberree?” (p. 99). And, guess what, he provides an answer: “Anybody who has one or more engrams. And since birth itself is an engramatic experience – every human being born has at least one engram!” (p. 99). Uh-oh! I guess we’d all better join Scientology. After all, no one else is out there to help us remove our engrams.

He writes: “Dianetics is easy to apply to the fairly normal individual and can relieve his occlusions and colds and arthritis and other psychosomatic ills. It can be used as well to prevent aberrations from occurring and can even be applied to determine the reactions of others” (p. 103). Oh, I think I can guess the reactions of others. Wait a moment – arthritis is psychosomatic? L., boy, you continue to surprise me.

At the end of the book, there is a sixty-page glossary, defining such complex terms as “by golly”: “a mild exclamation used to emphasize what is being said or to express surprise, wonder, puzzlement or the like” (p. 136). Interestingly, one of the terms L. includes is “cults of Los Angeles,” which he defines as “a reference to the diversity of devotions, crazes and fanaticisms characteristic of the greater Los Angeles area in the time period of this book, ranging from palm reading to drug use, health fads and bodybuilding” (p. 142). Is this a nod to his audience that he’s having them on? The glossary is also clearly a way of padding the book, as he is obviously doing by including this definition twice – once under “cults of Los Angeles,” and then a second time under “Los Angeles, cults of.” If its inclusion is a bit of a joke, L. wanted to make sure his audience had a couple of chances to get it. How thoughtful.

Check out my reviews of other cult classics:
- Dianetics: The Original Thesis
- Scientology: The Fundamentals Of Thought
- The Way To Happiness
Posted by Michael Doherty at 7:29 PM