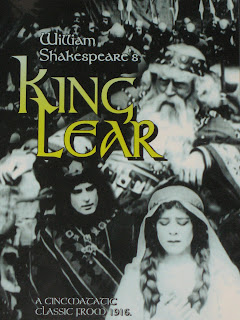 King Lear (1916) stars Frederick Warde, Lorraine Huling, Hector Dion. This is an early silent film version of King Lear. Interestingly, the film begins with a title card that mentions the play itself: “King Lear was written in 1607, during the time when the immortal dramatist was at the height of his creative power.”

The film opens with Lear dividing the kingdom, thus skipping the Kent/Gloucester moment. Kent is positioned between Lear and Cordelia when he pleads on behalf of Cordelia. The Fool is at Lear’s feet. This film, because silent, really sets up the relationships with the blocking. When Burgundy and France arrive, Burgundy is closer to Lear, and France is closer to Cordelia. As Lear exits, Cordelia tries to stop him, but he brushes her aside.

Then a title card reads, “At a later period. The elder daughters, having obtained possession of their father’s kingdom, treat him with scant courtesy.” We have a scene without any dialogue cards in which the sisters are cruel, and Lear is left alone with his Fool (so, Act I Scene iv). Then a title card reads, “Regan, second daughter to King Lear, comes, with her escort, to Gloster Castle.” (And yes, “Gloucester” is spelled “Gloster” throughout the film.) A title card tells us, “Edmund, the illegitimate son of the Earl of Gloster, plans his brother’s downfall.” Another title card informs us, “By a forged letter, Edmund tricks his father into hatred of his younger son.” And we see Edmund give Gloucester (or Gloster) the letter (Act I Scene ii).

The film then goes right to Act II Scene I, with Edmund and Edgar. Gloucester actually enters while they are still pretending to fight, so he sees this. His men chase Edgar out. We then see Edgar change into his Poor Tom disguise. And then the film takes us back to Act I Scene iv, when Kent, disguised, seeks a place in Lear’s service. Oddly, it then inserts a bit from the end of Act I Scene iii when Goneril tells Oswald, “Put on what weary negligence you please.” Kent then knocks Oswald down, and Lear pays him.

We soon go to Act II Scene ii, with Kent confronting Oswald outside the gate. And Kent is put in the stocks, which leads right to Scene iv, when Lear and the Fool find him thus. In this version, Lear sends his Fool inside to retrieve his daughter. Gloucester and the Fool then come back out to let Lear know the daughter denies him. Gloucester then persuades Regan to come out. Goneril and her people arrive on horseback as Kent is removed from the stocks. We see a lightning bolt, which leads to everyone withdrawing inside. The doors are shut on Lear, and he, Kent and the Fool are left outside.

The shots of Lear in the downpour are great, and a title card gives us the line, “I am a man more sinn’d against than sinning.” Kent then brings him to Edgar’s hiding place. Meanwhile Gloucester decides to seek out the king to aid him, and unfortunately tells Edmund. When Edmund is told he’ll be made Earl of Gloucester, there is a shot of Goneril and Regan looking at each other, hinting at their jealousy and rivalry.

Before even one of Gloucester’s eyes is out, the servant comes in to stop it, the title card saying, “Hold your hand, my lord; I have served you ever since I was a child – But now I bid you hold.” And we have the fight scene, in which Cornwall is killed and Regan stabs the servant from behind. Apparently while this has been going on, other men have plucked out Gloucester’s eyes, for he now returns with a bandage around his head. Regan then embraces Edmund.

Edgar meets Gloucester, though Gloucester is on his own, not led by an old man, as in the play. Gloucester puts his hands on Edgar’s face, and a title card says, “My son!” So this version dispenses with basically the entire Poor Tom/Gloucester plot, which is a shame. Edgar leads Gloucester to Dover.

We have a scene with Cordelia at the French court, and then return to Lear, who is mad in Dover. Oddly, in this version the Fool is still at his side. And Lear says his, “Ay, every inch a king” to him rather than to Gloucester.

Cordelia is there as Lear is brought into the tent, and so he is standing for their scene, at least at first. After Cordelia tells him not to kneel, she herself kneels at his feet.

When Kent arrives, Edmund has not yet told of his order for Lear and Cordelia to be killed. So he says it then (thus cutting the bit where Albany completely forgets about them). We then see men grab and kill Cordelia, and Lear rises to fight them off, something that is mentioned but not shown in the play. Lear then carries Cordelia out. Lear dies after saying he knows Cordelia is dead. And the film ends there.