Scientology: The Fundamentals Of Thoughts - A Cult Classic 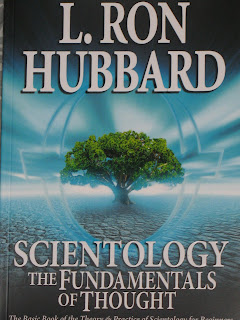 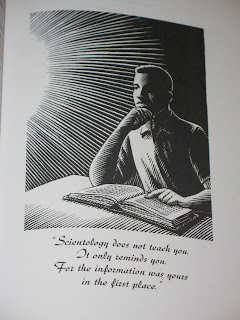 L. Ron Hubbard's book is a mix of pseudo-science and pseudo-religion, with a generous layer of 1950's atomic fear thrown on top.

Scientology: The Fundamentals Of Thought by L. Ron Hubbard is funny and yet frightening as well. Funny, because the whole thing is obviously ridiculous and a total con. Frightening, because a lot of people take it seriously. L. Ron Hubbard was a mediocre (at best) science fiction writer, who (as the story goes) made a bet with a much better science fiction writer (Robert Heinlein) that he could start a religion and make a lot of money. And good for L., he won the bet. (Bad for humanity, but who cares about such things?)

L. Ron Hubbard's science fiction-based pseudo-science, pseudo-religion has many followers, but this books offers no clue as to why. It's a hodge-podge collection of thoughts with some Oedipal and Freudian concerns, and is firmly based in the 1950s science fiction horror territory.

L. was clearly obsessed with atomic warfare, which makes sense, as this was written in the 1950s, the same time all those science-fiction monster movies were being conceived. But L. saw Scientology as the hero in the battle against atomic annihilation. In this book's epilogue, he wrote, "The only race that matters at this moment is the one being run between Scientology and the atomic bomb. The history of Man, as has been said by well-known authorities, may well depend upon which wins." It doesn't offer the specific names of these well known authorities, of course.

L. also claims that "Scientology is also used by business and government leaders to establish or improve organization." Who, for example? Again, the book doesn't say.

Easy To Read, Sort Of

Right off the bat, L. puts the blame on the reader for any confusion he or she may encounter while reading this tome. He writes that if the reader becomes confused, it's because he or she hasn't properly understood a word. And to aid the reader, a glossary is included in the back of the book. And throughout the book, terms are defined.

But do these definitions really help? The thirteenth chapter begins with this definition: "Self-Determinism is a condition of determining the actions of self." Imagine if Webster's were like this. No one would know anything.

Chapter Eleven begins with some other circular definitions: "By PROCESSING is meant the 'verbal exercising of a preclear in exact Scientology processes.' By PRECLEAR is meant 'a person who is receiving processing.'" So then "processing" means the verbal exercising of a person who is receiving processing in exact Scientology processes. Holy moly, did anyone edit this book? Or is this intentional, this leading the reader in circles?

There are some rudimentary drawings to help the reader, and also to pad this already-thin volume. Chapter One, for example, is less than a page long. And there are many pages of advertisements for other Scientology books and DVDs (including An Introduction To Scientology) at the end.

L. wrote in the first chapter that "Scientology is full of facts that work." He then suggests that people read the book in order to find one fact (yes, just one) with which he or she can agree. And then read it again, to find a second fact. Are these facts so difficult to find? The answer is yes. What a strange way to go about reading a book. Go ahead, try to find a fact. Good luck.

Are there any truths contained in the book? Of course. All religions and cults must have some nuggets of truth, onto which all of the nonsense can be attached. For example, in the sixth chapter, L. wrote, "Fixed on too many barriers, Man yearns to be free. But launched into total freedom, he is purposeless and miserable." That seems right.

Scientology of course has all sorts of made-up words, such as "thetan." What exactly is a thetan? L. offers this: "The Thetan (spirit) is described in Scientology as having no mass, no wavelength, no energy and no time or location in space, except by consideration or postulate" (p. 66). It's interesting to define something by what it isn't.

It has no mass, yet is supposed to reside in the skull or near it. It has no mass, yet with Scientology technology, they were able to separate this non-thing from the body. Very interesting. L. also claims that the thetan can deteriorate. But really, how would anyone know?

The Code Of A Scientologist

On page 116, there is "The Code Of A Scientologist." There are ten numbered points that all scientologists must live by. The first one, number one, says, "To hear or speak no word of disparagement to the press, public or preclears concerning any of my fellow Scientologists, our professional organization or those whose names are closely connected to this science."

Science? Well, whatever. The main point of that is that it just screams out "CULT." To hear no word of disparagement? Wow. That's like ordering them not to read or listen to a contrary opinion, to listen only to Scientologists on matters concerning Scientology. That's dangerous, and is absolutely the mark of a cult. Basically, if anyone tries to talk sense to these people, they're forbidden to even hear it. It's the first point of their code. (I guess they'll never read this review.)

As scary as that is, the book also includes "The Auditor's Code" (page 115). There are sixteen points to the auditor's code. Check out number nine: "Never permit the preclear to end the session on his own independent decision." I'm fairly certain that's considered kidnapping. Seriously, what if someone decides he or she has had enough and wishes to leave? What will the auditor do? Do the auditors resort to physical restraint?

In the chapter on auditing procedures, L. says, "This includes an ability to place one question, worded exactly the same way over and over again, to the preclear - no matter how many times the preclear has answered the question." Wow, that sounds incredibly annoying. And keep in mind number nine of the auditor's code, which keeps the preclear from being able to walk away. I wonder how many auditors have ended up being smacked by preclears. I hope all of them.

For those wondering how long these auditing sessions last, check out pages 150-151. These pages describe an exercise in which the preclear is ordered to push a small object around on a table, then stop, then change directions. L. writes, "Sometimes four or five hours spent in this exercise are very well spent on a very difficult preclear." And remember, it's the auditor who decides who is difficult, and who isn't.

A few pages later, L. writes that another "process can be continued for twenty-five hours (or even fifty or seventy-five hours) of auditing." Goodbye, life.

It seems that every time L. offers an example of a troubled person, it has something to do with his parents, and also with sex. Though Scientology considers itself the enemy of psychology, it clearly is taking a cue from Freud.

Here's a bit from the twelfth chapter: "Let us say he is obviously in father's valence (identity). He got into father's valence when he found he could get no attention from mother. Observing that father got some of her attention, he took father's identity. However, let us say he didn't like father."

As for sex, L. writes, "An anxiety about sex, however, occurs when an individual begins to believe that there will not be a body for him to have during the next lifetime." Really? Is that what Scientologists think about before sex?

Scientology: The Fundamentals Of Thought is just one of many books about Scientology, and is not intended to provide all the answers. After all, if one book contained the answers, cult members wouldn't shell out money for all the other tomes.

Scientology: The Fundamentals Of Thought was originally published in 1956. The current edition was published in 2007, by Bridge Publications, Inc., a company that is owned and run by Scientologists and only publishes Scientology books.
Posted by Michael Doherty at 4:14 PM