Shakespeare The Animated Tales: The Taming Of The Shrew (1994) DVD Review 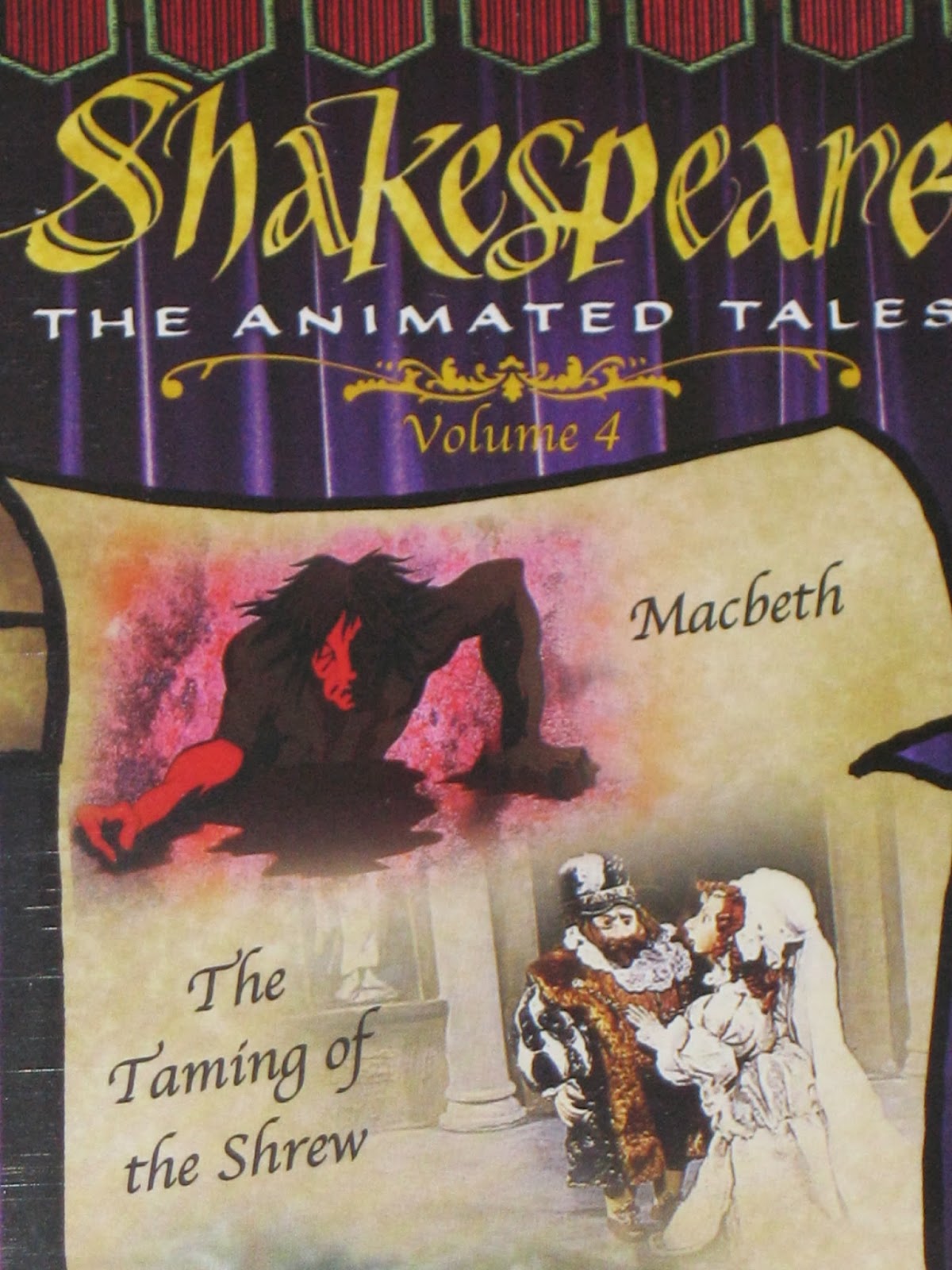 Shakespeare The Animated Tales: The Taming Of The Shrew (1994) stars Nigel Le Vaillant, Amanda Root, Gerald James,  and John Warner. The screenplay is by Leon Garfield. It was directed by Aida Ziablikova. This delightful version is done with puppets. And though this version is only twenty-six minutes long, it includes the Induction. It does, however, cut several characters, including Tranio and Biondello. It begins with the Hostess’ line “A pair of stocks, you rogue,” which is spoken off screen. The door opens and Sly comes stumbling out. Oddly, it’s daytime. Sly immediately falls asleep. The Lord comes upon him and says, “Grim death, how foul and loathsome is thine image.” He turns to one of his men and whispers to him. They had successfully hunted a boar and are carrying it tied on a large stick. They drop the boar, and continue along with Sly tied in its place. They take him to the Lord’s house, and it’s not long before they convince him he’s a lord, and they do so without the page playing his wife.

The Taming Of The Shrew begins after a curtain is opened. It begins with Baptista’s line: “Gentlemen, importune me no father,/For how I firmly am resolv’d you know.” When he says “elder,” Katherina pushes her way in to stand between Baptista and Bianca, and in doing so knocks over Gremio and Hortensio. It’s interesting, because it’s like she wishes to be married, though when she gets there, she crosses her arms. Bianca is dressed in pale blue, with blond hair; Katherina is in red, with red hair.

The curtain is drawn, and Petruchio rides in on our side of the curtain. It then opens to reveal Hortensio at a window. After Petruchio says he won’t sleep until he sees Katherina, he rides off, and the wall is raised to reveal the next scene…

The next scene is a courtyard with a fountain. We hear soft crying and then we see Katherina pulling Bianca in on a rope. Katherina dunks Bianca’s head in the fountain. Baptista breaks it up, and then Petruchio arrives. Gremio and Hortensio are cut from the scene, so there is no bit with the lute. After Petruchio says that it is nothing to get Katherina’s love, a chamber pot is hurled down at him from Katherina’s balcony. He catches it and continues looking up at her as Baptista speaks. It’s a nice touch, and gives a little more humor and meaning to Baptista’s questions, “Shall I send my daughter Kate to you?” Their scene is done as sort of a dance. After Katherina’s “remove you hence,” Petruchio says, “Come, come, you wasp, i’faith you are too angry,” thus cutting the great joke about asses and women being made to bear. Also, the lead-up to the wasp line is cut. When Petruchio says “in his tail,” he gives Katherina a playful slap on the behind. But then the lines about “tongue” are sadly cut. Katherina simply says “And so farewell.” He then goes right to “Nay, come again.” I love his straight, serious delivery of “I swear I’ll cuff you if you strike again.” When Petruchio says “And, kiss me, Kate, we will be married a’Sunday,” she exits without kissing him.

It then goes straight to the wedding day, beginning with Katherina’s line “I told you, I, he was a frantic fool.” Interestingly, considering it’s animation, Petruchio’s outfit isn’t too over-the-top odd. He wears a big yellow and green feathered hat, and two mismatched boots. Petruchio kisses Katherina after “And seal the title with a lovely kiss.” It then cuts to the feast and so cutting everything that happened at the actual ceremony. Petruchio and Katherina enter. Because Tranio is cut, only Gremio entreats Petruchio to stay before Katherina does, so her entreating isn’t as strong. Two of her lines are combined, cutting out Petruchio’s response. She says: “Let me entreat you. Now if you love me, stay.” So we lose that great bit about him being content. Also, everyone is already at the table, so Katherina saying “Forward to the bridal dinner” doesn’t really make sense. Neither does Petruchio saying “They shall go forward, Kate, at thy command” and “go to the feast.” The stuff about Grumio drawing his weapon is cut. Interestingly, Lucentio is there to say, “Mistress, what’s your opinion of your sister?” Bianca’s response, “That being mad herself, she’s madly mated,” is the last line of the scene.

We see Petruchio and Katherina riding in the rain. Katherina falls from the horse, but Grumio is not present, and Petruchio helps her up. They then arrive at Petruchio’s home, and Petruchio begins berating his servants. They enter the bridal chamber, and soon pillows are tossed back out through the doorway. Nathaniel and Peter’s lines are left intact – “He kills her in her own humor.” Petruchio then re-enters, eats some of the meat, then gives just the first and last lines of his big speech.

A short narrator closes the curtain and says, “While Kate was learning one lesson, her sister, the fair Bianca, was learning another.” He then opens the curtain on the next scene, explaining that Lucentio, “cunningly disguised as a schoolmaster,” outwitted his rivals and won Bianca’s heart. Bianca begins the scene with her line, “What, master, read you?” And she and Lucentio kiss, leading the narrator to tell us that Hortensio and Gremio gave up their hopes for Bianca’s love, and that Hortensio decided to marry a widow.

Back at Petruchio’s home, Katherina finally gets to eat. She is seated at a table, but eats with her hands. The Haberdasher is cut, but the Tailor presents both the hat and the gown. When Petruchio says it is seven o’clock, he and Katherina are actually standing in front of a clock on the mantel. Hortensio is there to deliver the last line of the scene: “Why, so this gallant will command the sun.”

The next scene, with the Pedant, is cut.

Petruchio and Katherina travel on horse to Baptista’s house, but Hortensio and the servants are not with them, so Hortensio can’t advise Katherine on what to say. The scene ends after the sun/moon bit, with Katherina’s line “And so it shall be so for Katherine.” Vincentio is cut.

A curtain is closed, and then opened on the next scene. The narrator explains who married whom. And we go to the banquet. The exchange between the Widow and Katherina is cut. It begins with Baptista’s line “I think thou hast the veriest shrew of all,” which is odd, because the line comes out of nowhere. It leads Petruchio to suggest the bet. While Katherina gives her big speech, we see Sly in bed watching. Katherina’s speech is cut after “Too little payment for so great a debt.” After Petruchio and Katherina kiss, Petruchio says, “’Twas I won the wager/And, being a winner, God give you a good night!” He delivers the line out, as if to us and to Sly. And the actors all bow. The Lord and narrator applaud.

And then, interestingly, we get the closing scene from The Taming Of A Shrew (likely a bad quarto of Shakespeare’s play), with Sly back outside calling for another drink, then waking to see the players are gone. He gets up, saying: “I have had the bravest dream. I know now how to tame a shrew.” And he goes back inside the house he was originally tossed out of. But a moment later the Hostess yells her first line again, “A pair of stocks, you rogue,” and out comes Sly again.

Posted by Michael Doherty at 6:46 PM