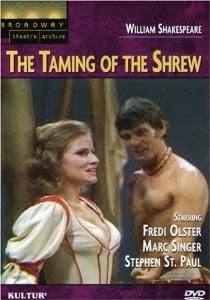 The Taming Of The Shrew (1976) stars Marc Singer, Fredi Olster, William Paterson, Rick Hamilton, James R. Winker and Stephen St. Paul. It was directed by William Ball and Kirk Browning. This is a filmed stage production by the American Conservatory Theatre of San Francisco. It’s done broadly, in the style of commedia dell’arte, which is totally fun, though at times too silly. And there are many silly sound effects punctuating the jokes throughout the performance, and these are sometimes annoying. The DVD includes an introduction by Hal Holbrook.

The Induction is completely cut. The production opens with several people in masks and identical pale costumes slowly stepping onto the stage. They begin dancing, and then the entire cast suddenly jumps in, forming a line before the audience. The play then begins, with the masked folks remaining at the sides of the stage.

When Lucentio (Stephen St. Paul) says “fair Padua” in his first line, the masked people cheer (almost like a rock concert audience would when the lead singer mentions their town). They cheer again the second time he mentions Padua (“I have Pisa left/And am to Padua come”). Lucentio joins Tranio on the line “where is no pleasure tane.” There is a lot of silly stage business with Hortensio, Gremio and Katherina, accented by percussion off stage. Katherina (Fredi Olster) kicks out Gremio’s cane three separate times. Baptista (William Paterson) delivers some of his lines in almost a singing manner. When Hortensio (James R. Winker) says “There be good fellows in the world,” he gestures toward the audience with his hat. Silly sound effects accompany Gremio’s line “would thoroughly woo her, wed her, and bed her, and rid the house of her.” Tranio helps Lucentio with the explanation he devises for Biondello. Lucentio pauses after “For,” and Tranio makes the sign of a knife across his throat, leading Lucentio to finish the line, “in a quarrel since I came ashore/I kill’d a man.”

Petruchio (Marc Singer) and Grumio (Ronald Boussom) enter, matching each other’s steps, and when Petruchio says “Padua,” the crowd cheers. He says it with a knowing smile, almost like a television game show host. There’s plenty of physical comedy with the whole “knock” bit between Petruchio and Grumio. And when Hortensio says, “What happy gale/Blows you to Padua,” the crowd cheers. When Petruchio says, “Crowns in my purse I have,” Grumio says “Ha,” and Petruchio elbows him. Petruchio continues, “and goods at home,” leading Grumio again to say “Ha!” So apparently the Petruchio in this version is quite poor (though he still has several servants). Petruchio and Grumio turn away when Hortensio mentions “a shrew ill-favored wife,” but stop when he says, “And yet I’ll promise thee she shall be rich,” and turn back to him when he adds, “And very rich.” Hotensio is very deliberately luring Petruchio, so he’s not much of a true friend in this version. Petruchio, Grumio and Hortensio do a little dance and then all say together, “I come to wive it wealthily in Padua,” an odd choice. They all say, “If wealthily,” but don’t finish the line, another odd choice. Hortensio sings some of his lines about Bianca. There is a joke about Gremio’s breath, which leads to Petruchio’s “Tush, tush.”

Bianca (Sandra Shotwell) is bound at one end of a long rope, which Katherina holds at the other. When Katherina says “See thou dissemble not,” she uses that end as a whip. Cut is her question about which suitor Bianca likes best, and all the related dialogue. Baptista enters and is caught by the rope between the two sisters. Hortensio’s disguise is a false nose and glasses, not very cunning, nor believable as he has long blond hair which makes him stand out. Petruchio pronounces his name “Petrukkio” in this version. Baptista reads Lucentio’s name on the books presented by the disguised Tranio, thus allowing his line, “Lucentio is your name.” Hortensio enters with his head clear through the lute. His delivery of “And there I stood amazed for a while” is great, hilarious. Petruchio takes off his shirt on “If she deny to wed I’ll crave the day.” There’s a wonderful moment at the end of that speech when Petruchio says, “and now, Petruchio, speak,” and he turns to see her. And both are silent, clearly attracted to one another. The play up until this point has been zipping along, so this quiet moment is made even stronger by comparison. Petruchio gives a long pause after “Good morrow” and before “Kate,” because she laughs at him. “Kate” stops her, angers her. On “of my consolation,” he kisses her hand, and she then knocks his cap off. After Katherina slaps him, she seems as stunned by her action as he. But then after he says, “I swear I’ll cuff you if you strike again,” she does hit him again, much harder, knocking him down. That’s a poor choice, because he really should hit her after that, yet he doesn’t. He covers her mouth with his hand on “But slow of speech.” They do some wrestling moves, which are a bit too silly. But then there are some very impressive physical moves, Petruchio even lifting Katherina above his head, and dancing a step or two. On “Kiss me, Kate,” he kisses her, not giving her a chance to refuse. A drum roll accompanies the kiss. Tranio joins Gremio on the line “Now is the day we long have looked for.”

The first scene of Act III is done well, with Hortensio and Lucentio wooing Bianca with their lessons. Bianca makes it clear that she prefers Lucentio.

Biondello, upon his entry, does somersaults. His delivery of the description of the horse is fun. Everyone joins Baptista on his line, “that’s all one.” Petruchio swings in on a rope. Tranio, Lucentio and Biondello join Gremio on his line, “Such a mad marriage never was before.” When Katherina says, “Let me entreat you,” the whole crowd steps forward, anxious to hear Petruchio’s response – a very nice touch. Katherina’s line “Father, be quiet” is funny, as Baptista had made no move to speak. There is a lot of physical play before Petruchio carries Katherina off. That scene ends with Baptista’s line, “Nay, let them go, a couple of quiet ones.” The rest of the scene is cut, including Bianca’s wonderful line, “That being mad herself, she is madly mated.”

Petruchio’s servants are masked. They line up when Grumio calls them, but then scatter before Petruchio enters. All of the stuff with Curtis is cut. Katherina is clearly tired, leaning on a post, beginning to fall asleep, which wonderfully leads to Petruchio saying “Sit down, Kate” as he lifts her up. There is, of course, more physical comedy during the meal that Katherina never gets to eat. Petruchio picks her up and carries her off stage. He then returns and delivers his big speech directly to the audience. It’s done really well, with no accompanying sound effects. After “He that knows better how to tame a shrew/Now let him speak,” he pauses, waiting for someone from the audience to respond.

Tranio’s opening lines of the next scene are cut. Hortensio oddly does a sort of Porky Pig impression on “all the former favors/That I have fondly flatter’d her withal.” When Tranio says “’Tis death for anyone in Mantua to come to Padua,” the crowd cheers again, but Tranio shushes them. There is some silly, somewhat stupid stage business about getting the Pedant off the stage. He continually hits a pole. And then, apparently delirious, begins some lines from Richard The Third: “Now is the winter of our discontent/Made glorious summer by this son…” A large hook then pulls him off stage.

Katherina enters looking a bit worse for wear, her clothing ripped, her face dirty. The beer and mustard joke is present, but shortened. When Katherina thanks Petruchio for the food, he allows her to eat, putting the plate on the floor. She eats the food with her hands, crouched over the plate, while Petruchio stands over her, talking about the fine array they’ll have when returning to Baptista’s house. I love Katherina’s delivery of “Love me or love me not, I like the cap.” There is another wonderful, honest moment when Petruchio says, “What, is the jay more precious than the lark.” Petruchio does have a whip, which he cracks on “It shall be what o’clock I say it is.” It is Grumio, not Hortensio, who says the final line of the scene: “Why, so this gallant will command the sun.”

The Lucentio/Biondello dialogue is cut.

When Petruchio describes Vincentio as a young girl, he pinches Vincentio’s cheek and kisses his hand. Hortensio is cut from the scene, so his line isn’t there to help add a pause before Katherina’s first line to Vincentio. When she says “sun,” she offers it like a question to Petruchio. The crowd, of course, cheers when Vincentio says, “bound I am to Padua.” We see the love Petruchio has for Katherina when he says “my wife, this gentlewoman.”

When the Pedant says “his father is come from Padua,” the crowd is silent. So he repeats, “Padua,” and they cheer. And we see the mutual attraction when Petruchio and Katherina kiss at the end of the scene.

When the Widow says, “He that is giddy thinks the world turns round,” Katherina stands up and moves behind Petruchio’s chair. Petruchio is surprised when Katherina responds to his command to come. Katherina clearly relishes her speech, especially delivering the beginning of it to the Widow, who has just been unkind to her. On “Thy husband is thy lord,” she walks to Petruchio, and then stands behind him, with one arm on his shoulder. She then delivers part of her speech to Bianca. After she says her “hand is ready; may it do him ease,” she lies on the floor, placing her right hand under Petruchio’s shoe. He then goes to her and gently kisses that hand. After the kiss, Katherina winks at the audience.

(The DVD includes A Conversation With William Ball, a twelve-minute interview conducted by Harold Clurman.)
Posted by Michael Doherty at 12:22 PM