The Way To Happiness: A Minor Cult Classic 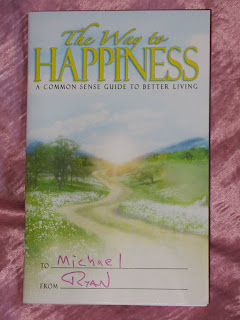 The Way To Happiness: A Common Sense Guide To Better Living is a small volume attributed to L. Ron Hubbard, founder of Scientology. Who knows how many of these books were actually written by L. and how many were generated by his eager accountants?

Anyway, I have my friend Ryan to thank for contributing this little cult gem. Apparently I’m important for his survival, for on the first page, L. writes: “Choose someone whose actions, however remotely, may influence your own survival. Write the person’s name on the top line of the front cover of this book. Write or stamp your own name, as an individual, on the second line.” And that’s precisely what Ryan has done. L. also instructs: “Give the person several additional copies of this book but do not write your name on them: let the other person write his or hers. Have the person present these copies to others that are involved in his or her life.” Ryan neglected to do that. I have just the one copy. So, sorry folks, you won’t be receiving copies of this one from me. Instead, I present you with this review. I hope it will be enough to “greatly enhance your own survival potential” (p. 1).

Though this book is small, it contains much wisdom. For example, regarding happiness, L. writes, “If one does not survive, no joy and no happiness are obtainable” (p. 5). I hadn’t thought about it before, but this is true. Dead people are so bloody joyless. And for those with a limited vocabulary, L. is kind enough to define difficult words such as “happiness,” which he says is “a condition or state of well-being, contentment, pleasure; joyful, cheerful, untroubled existence; the reaction to having nice things happen to one” (p. 5).

L. includes a short chapter titled “Take Care Of Yourself.” In this chapter he writes: “When they are ill, even with communicable diseases, people often do not isolate themselves or seek proper treatment. This, as you can easily see, tends to put you at risk” (p. 7). Before reading this book, whenever I thought of sick people, I always hoped they’d feel better. But now I realize that their sickness is really an attack on me. Their illness is an attempt to put me at risk. L. is right: we need to isolate the sick and diseased, and keep them well away from me. L. also says, “You are well within your rights to insist that people bathe regularly and wash their hands” (p. 7). I agree, but some people at the library and on the subway got angry when I insisted they go take a bath. So obviously, in addition to the sick and diseased, we need to isolate the filthy and the stinky. Perhaps we should put them all in Salt Lake City. Or somewhere in Florida. Remind smelly people that “While clothes can be expensive, soap and other tools of self-care are not that hard to obtain” (p. 33). It’s better to be a clean, naked person than a fully dressed stinker.

Regarding sex, L. writes, “A ‘feeling of guilt’ is nowhere near as sharp as a knife in the back or ground glass in the soup” (p. 11). This might seem obvious, but I’ve never heard it expressed in so clear a manner before. Also, I think I’m going to avoid soup from now on. Especially if I’m ever invited to the Scientology Celebrity Center again.

Sometimes sex can lead to children. L. is there to help us tackle this problem as well. He writes, “Bringing a child into the world today is a little bit like dropping one into a tiger’s cage” (p. 13). This is true: both are briefly amusing and entertaining, but then require some serious clean-up and explanations. It’s best to avoid having children. But if you do have one, remember: “A child is a little like a blank slate. If you write the wrong things on it, it will say the wrong things” (p. 14). So be careful when scribbling on your child.

It’s a tough world out there, as L. well knows. He warns us: “The stupid, the evil and the insane seek to solve their real or imagined problems with murder. And they have been known to do it for no reason at all” (p. 23). That’s the really frightening aspect of it – when stupid people murder others without any good reason. Of course, it may simply be that the stupid people are unaware of the definition of murder. Fortunately for them, L. provides this definition: “the unlawful killing of one (or more) human being by another, especially with malice aforethought (intending to do so before the act)” (p. 23). So come on, stupid people, remember: If you’re going to murder, you need to have “malice aforethought.” That is, you need a reason. We’ll all be a lot safer when the stupid, the evil and the insane have reasons for the murders they commit. So be sure to pass on a copy of the book (or a link to this review) to them.

L. provides some sound legal information in this book as well. He writes: “An ‘illegal act’ is not disobedience to some casual order like ‘go to bed.’ It is an action, which if done, can result in punishment by the courts and state – being pilloried by the stage propaganda machine, fines and even imprisonment” (p. 25). It’s best to obey all laws. After all, no one wants to be pilloried by the state propaganda machine. I didn’t even know that pillories were still erected. It’s a good thing I read this book. And children, remember: if you get some casual order like “go to bed,” you can totally ignore it without fear of the pillory.

L. is concerned for our safety. He writes: “Movie stuntmen who don’t practice first get hurt. So do housewives” (p. 53). Yes, it is best to practice setting aside all personal goals and aspirations before going ahead and doing your husband’s laundry. Otherwise, you’re likely to get hurt.

At the end of this short book, L. writes: “All you have to do is keep The Way to Happiness flowing in the society. Like gentle oil spread upon the raging sea, the calm will flow outward and outward” (p. 74). It's an interesting analogy, and I'm surprised that L. likens Scientology to an oil spill on the ocean, which damages the habitat and all life forms with which it comes in contact.

Thanks, Ryan. I hope that my writing this review has enhanced your survival potential.

Check out my reviews of other cult classics:
- Dianetics: The Original Thesis
- Scientology: The Fundamentals Of Thought

Posted by Michael Doherty at 4:11 PM