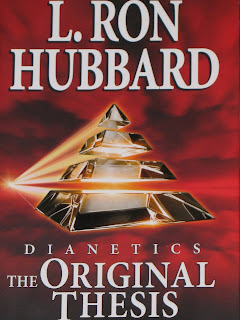 This is the book that started it all for L. Ron Hubbard and his merry band of clear folk.

Originally titled Abnormal Dianetics, this book predates Dianetics and Scientology. Of course, a logical question might be, How could Abnormal Dianetics predate Dianetics? Well, this book's original title existed because the book "revealed the single source of all abnormal and irrational behavior" (foreword, vii). According to book's foreword, it wasn't originally published, but circulated to a few of L.'s close friends. But these friends took it upon themselves to make copies for their friends, and soon the good word spread around the world.

"The purpose of Abnormal Dianetics is to delete from the existing mind those physically painful experiences which have resulted in the aberration of the analytical mind, to erase from the body psychosomatic illnesses which are physical abnormalities and the physical manifestation of the aberration, and to restore in its entirety the proper working function of a mind not otherwise physically deranged" (p. 17). Good goals. Basically, according to L., bad experiences from our childhoods (and even before our births) linger in our minds and continue to cause harm to us throughout our lives, unless we do something about it.

And these are called "engrams." In this book, an engram is defined as "a period of physical pain including unconsciousness and antagonism experienced by an individual, group or society and residing thereafter as irrational and restimulatable dramatizations" (p. 180).

Apparently, Scientologists are against abortion because L. states that "there is no period in the life of the organism from conception to death when this mind is not awake, observing and recording perceptions." Conception, really? Wow. I'd love to be able to replay that record. Wait, on second thought, no, that would be horrible.

And actually that's one of L.'s points. That birth is a painful experience that people never really get over. He writes, "Birth is ordinarily a severely painful unconscious experience. It is ordinarily an engram of some magnitude. Anyone who has been born, then, possesses at least one engram" (p. 48). And since Scientology is the only entity capable of removing engrams, anyone who has been born but is not a Scientologist is suffering needlessly. (There is the question, Which is worse: being a Scientologist, or never being born? There really isn't an answer.)

Interestingly, earlier in the book, L. writes, "None of these minds are 'unconscious,' nor are they 'subconscious.' The entire organism is always conscious" (p. 22). If the mind is never unconscious, from conception onward, how can birth be "a severely painful unconscious experience"?

As in other Scientology books, there are circular and confusing definitions throughout this tome. For example, "Dynamic is defined as the dynamic thrust through time toward the attainment of the goal" (p. 25). When will L. learn that one cannot define a word by using the word? Well, as he's been dead for quite a while, he most likely will never learn that.

Scientologists, while struggling with logic and rational thought, also have trouble with simple mathematics. On page 26, L. writes, "The dynamics are: One, personal; Two, sex; Three, group; and Four, Mankind... Any one of these philosophies is so complete that it can be logically made to include the other four." The other four? That would make a total of five, wouldn't it? Math is hard.

I think the real goal of Scientology is to confuse everyone to the point of submission. Because obviously only the Scientology experts are able to make any sense of this lunacy. And if I'm confused, it's only because I'm a Tone 1 or 2 - "From 1 to 2 is the range of antagonism, including suspicion, resentment and anger" (p. 59). Suspicion? Absolutely. But L. writes that the "probable average of Mankind, at this writing, may be in the vicinity of 3.0" (p. 60). Tone 3? Good job, Humanity!

The other goal of a Scientologist is to be Clear. That basically means that the person no longer has any engrams. It's the job of the auditor to find and remove the engrams. So clearly an auditor should himself or herself be Clear before attempting to clear someone else. But get this: "Even if he is not himself cleared, the auditor must act like a Clear toward the preclear" (p. 79). That's right: Fake it! And that's really the core of Scientology. Act like you're clear. Act like you know what the fuck this is all about. Act like you know something that other people don't know. And then take their money, promising to let them in on it. But here it is, written by L. himself: the entire thing is a sham. They fake it. And you know why they fake it? Because there is no such thing as an engram.

Of course, Scientologists have an answer to that as well. If I say that there is no such thing as an engram, they say that I have a doubting engram. It's the engram telling me that engrams don't exist, so that I won't go to an auditor and have my non-existent engram removed. You see? If you're being audited, and you can't remember any engrams, that means you have more engrams that are causing you to forget your engrams.

And L. is really obsessed with the idea of attempted abortions. According to him, we've all survived at least one attempted abortion. He writes, "The auditor should suspect an abortion attempt in every preclear he audits" (p.157). According to L., we are all the results of botched abortions. And through the miracle of auditing, the preclear will remember this attempted abortion. What fun! L. continues, "Whether or not the preclear disbelieves the diagnosis is of no importance to the auditor as the prenatal engrams may very well contain the words 'Can't believe it.'" That is so convenient. Again, if you don't believe that your parents attempted to abort you, the reason for that is that the engram created at the moment of the attempted abortion is telling you not to believe it.

Scientologists are completely fucking nuts! But you can't help but love them. They've managed to attain a whole new level of absurdity that is in some way delightful. It's the most well organized madness that I'm aware of.

Here is one other sentence from Dianetics: The Original Thesis that I absolutely love and just have to include here: "No pervert ever became a pervert without having been educated or abused by a pervert" (p. 107). (Hmm, perhaps I should become a teacher.)

One other bit worthy of note: L. actually criticizes Charles Dickens as a writer. He writes, "Individuality, if by that is meant a man's desires and habits, is not traced to the reactive mind, save when by 'individuality' is meant those flagrant eccentricities which pass in Dickens for characters" (p. 73). Wow. L. Ron Hubbard criticizing Charles Dickens is like Britney Spears criticizing Beethoven.
Posted by Michael Doherty at 6:25 PM