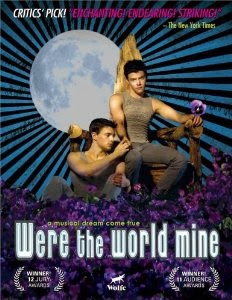 Were The World Mine  (2008) stars Tanner Cohen, Wendy Robie, Judy McLane, Zelda Williams, Ricky Goldman, and Nathaniel David Becker. It was directed by Tom Gustafson. This delightful film has as its focus an all-male school production of A Midsummer Night’s Dream. But there are also other Shakespeare references throughout the movie, including references to As You Like It, Romeo And Juliet and, surprisingly, The First Part Of King Henry The Sixth. The film’s title comes from Helena’s line to Hermia in Act I Scene i of A Midsummer Night’s Dream.

After a dodge ball game, the boys are in the locker room. One of the boys teases, “Hey, you’re gonna be late for the Shakes-queer crap.” Another adds, “That crap’s like four hundred years old. It doesn’t make sense.” But another boy retorts, “It does to anyone with a brain.” In the classroom, several Shakespeare quotes are on the blackboard, including, “The course of true love never did run smooth” and “I have a device to make all well,” both of which are from A Midsummer Night’s Dream. There is also a bust of William Shakespeare. The teacher, Ms. Tebbit (Wendy Robie) challenges her students to write their feelings in verse, remembering William Shakespeare. She then quotes, “What angel wakes me from my flowery bed?” And the students repeat it. She then quotes, “I pray thee, gentle mortal, sing again.” The students echo her. Both of those lines are ones Titania speaks when she meets Bottom. Ms. Tebbit then quotes Helena from Act I Scene i, “Love looks not with the eyes, but with the mind.” The students repeat the line. She then continues with Helena’s next line: “And therefore is winged Cupid painted blind.” The students repeat the line, without much enthusiasm. At the end of class the teacher hands Timothy (Tanner Cohen) a flier about the production of A Midsummer Night’s Dream. The flyer states, “All seniors required to participate.” She tells him auditions are Friday. Timothy says, “I’m not an actor,” to which Ms. Tebbit responds, “All the world’s a stage,” quoting Jaques from As You Like It. She then tells him, “Awaken and empower what’s within.”

We see a bit of the auditions. One boy reads Bottom’s part: “I see their knavery. This is to make an ass of me, to fright me.” He then asks the teacher, “Is this a girl’s part?” Timothy shows up and reads Puck’s part from Act III: “And the youth, mistook by me,/Pleading for a lover’s fee.” He stops and says, “I don’t even know what I’m saying.” He then continues: “Shall we their fond pageant see?/Lord, what fools these mortals be!” The production is to be at least partially a musical version, as she then has him sing some of Puck’s lines from Act V: “We fairies that do run from the presence of the sun/We follow darkness like a dream” (a variation on the play’s lines: “And we fairies, that do run/By the triple Hecate’s team/From the presence of the sun,/Following darkness like a dream”). Ms. Tebbit holds out a copy of the play for Timothy. On the cover it says, “Foreword by Max Reinhardt.” That’s an edition from 1935.

There is a shot of the boys looking at the cast list. Timothy is cast as Puck, who interestingly is listed at the top of the sheet. One of the boys, looking at the sheet, asks: “What is Thisby? Is that a chick?” But of course Thisby is not listed on the sheet. The character is listed just as he should be – as Francis Flute. So that character’s question is a minor error in the film.

The physical education instructor is upset with the cast list, saying his athletes don’t have time for the play. Ms. Tebbit responds by quoting from the second act of The First Part Of King Henry The Sixth, “I will note you in my book of memory.” Timothy’s mom at first seems upset that Timothy is playing a fairy.

We then see Timothy working on his lines from Act II Scene i: “I jest to Oberon, and make him smile…” Then at rehearsal, the cast works on that same scene, beginning with the Fairy’s first line. At home, Timothy’s friend Max (Ricky Goldman) helps him with his lines. Max says, “Demetrius says, ‘Yea, art thou there?’” Timothy responds with Puck’s line, “Follow my voice. We’ll try no manhood here.” At school, they rehearse the scene where Oberon tells Puck about the flower. When Timothy tells the teacher he still doesn’t understand half the text, she says: “Unite rhythm with words, and they will unlock to empower you. Like a midsummer night’s dream come true. Take pains; be perfect. Adieu” (the last lines being Bottom’s from Act I Scene ii).

That evening Timothy works on the verse of the speech, trying out the line, “I’ll put a girdle round about the earth/In forty minutes.” He then tries to create his own love juice, and sings some of Bottom’s lines (those about not being afraid, and this after having been taunted in school for being gay). He sings other lines from the play, such as Hermia’s “I know not by what power I am made bold,” Helena’s “But still you flout my insufficiency” (a variation on her “But you must flout my insufficiency?”), and “My tongue, your tongue, were the world mine” (from Helena’s lines, “My tongue should catch your tongue’s sweet melody/Were the world mine”). It becomes a musical dream-like sequence, incorporating several other lines from the play. At the end of the sequence his white flower is now purple. And when Max enters his room, some of the flower’s juice squirts into his eyes, causing him to fall instantly in love with Timothy. Timothy tells Max to leave, and Max quotes Romeo And Juliet: “Parting is such sweet sorrow.”

Timothy takes the purple flower to school for rehearsal. When they rehearse the scene where Hermia and Lysander are going to sleep, Timothy enters as Puck with the flower and anoints Lysander’s eyes. He then squirts the boy playing Hermia too, and then several other boys, leading to a whole lot of kissing. It’s silly and delightful, and Ms. Tebbit seems pleased, or at least amused. Jonathon (the boy Timothy is actually interested in) falls in love with Timothy, and when his girlfriend shows up, asking if this is a joke, Jonathon tells her: “Don’t mock my love. Who would not change a raven for a dove?” (using Lysander’s line to Helena).

Max and Jonathon (Nathaniel David Becker) both swear their love for Timothy because of the flower’s effects, just as Demetrius and Lysander do for Helena, leading to a fight. Jonathon tells Max, “Follow if you dare” (as Lysander tells Demetrius, “Now follow, if thou dar’st”). But Puck is not there to lead them astray and keep them from fighting. So in this film, Max and Jonathon actually do fight.

The flower has affected a large portion of the town’s population, and the physical education instructor, now in love with the principal, sings, “The course of true love never did run smooth” (Lysander’s line to Hermia in Act I). And we see several characters in various places sing that line (sort of like in Magnolia when all the characters sing that Aimee Mann song). Soon nearly the whole town is gay. And that leads to an emergency meeting at the school, where one concerned parents says, “Shakespeare was queer too.” Ms. Tebbit arrives and says Shakespeare has “never been proven to be a homosexual. Bisexual, perhaps.” She tells everyone that if they return that night for the play, they will make amends.

As Timothy’s mother and teacher go looking for Timothy, we hear voices singing the Fairy’s lines from Act II Scene i: “Over hill, over dale…” Ms. Tebbit finds Timothy and Jonathon cuddled together by a tree. She sings, “What have we done? We have mistaken quite and laid the love juice on some true love’s sight” (using Oberon’s words to Puck in Act III: “What hast thou done? Thou hast mistaken quite/And laid the love-juice on some true-love’s sight.” She then continues singing, “Thieves of love, we’ve come by night, and stolen lovers’ hearts away in spite” (using Hermia’s lines to Helena from Act III: “You thief of love! What, have you come by night/And stol’n my love’s heart from him?”). That leads to the company singing Oberon’s lines to Titania from Act IV: “Be as thou wast wont to be;/See as thou wast wont to see.”

And then we see some of the play’s production, starting with Puck’s “Follow my voice. We’ll try no manhood here.” Puck sings the lines, “On the ground/Sleep sound…” And he applies the remedy to all. Though it’s an all-boys school, Timothy’s female friend sings and plays guitar near the end. She sings the Prologue from the Mechanicals’ play: “Gentles, perchance you wonder at this show…” The song replaces the entire play. And it leads right to Puck’s famous final lines. And after the play, Jonathon is still in love with Timothy.


(The DVD includes a commentary track and the film’s trailer.)

Posted by Michael Doherty at 5:41 PM