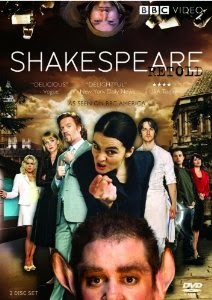 It opens with shots of trees, with the sound of a man and woman arguing. He says he has two days to save a marriage. We’re then introduced to Puck (Dean Lennox Kelly), who is up a tree and addresses the camera directly. He tells us, “Never leave home without your love juice” and “Things aren’t always what they appear to be” (the second being a cliché). He allows one drop of love juice to fall into the camera lens, so that we will be enamored of the film, I suppose. It doesn’t quite work, though there are lots of things to like about this production. Anyway, we then see that it is Oberon (Lennie James) and Titania (Sharon Small) who are arguing.

Dream Park is a place to which Puck and the others bring couples who are in trouble, to put them back on the right track. Theo (Bill Paterson) and Polly (Imelda Staunton) arrive with their daughter Hermia (Zoe Tapper) to celebrate Hermia’s engagement to James Demetrius (William Ash). (Theo and Polly are the film’s Theseus and Hippolyta, though in this version they are already married and are Hermia’s parents.) Zander (Rupert Evans) sneaks into the park to stop the engagement party. He and Hermia tell Theo that they’re in love, that Hermia can’t marry James.

Meanwhile, two security guards (including Bottom) talk about how they want to work as entertainers at the park, doing coin and card tricks and impressions. Soon we meet the other three, with Quince explaining what is needed for the party. In this version, Bottom (Johnny Vegas) isn’t given the respect he usually gets from the others.

Hermia and Helena talk, Helena upset because Hermia had never mentioned Zander before. Zander has found an empty villa in the woods, and he and Hermia are going to break in to be together. Hermia tells Helena this. By the way, Hermia is blond and Helena has dark hair, though they both are approximately the same height.

Theo and Polly seem to be having a bit of stress in their marriage as well. And Oberon and Titania recognize this, and Oberon wants to save their marriage. But Oberon and Titania continue to argue. He does say, “Ill met by moonlight, Titania,” though it is daylight and they’ve already met. Oberon talks to Theo at the bar, and is visible only to Theo. Oberon and Puck had been at Theo and Polly’s wedding, and Oberon reminds Theo of that. Oberon mentions to Theo that he and Titania have troubles, which is why the weather is so weird these days.

Oberon tells Puck he needs him to get some love juice to use on Titania. Oberon speaks a few lines from the play: “In maiden meditation, fancy free./Yet mark’d where the bolt of Cupid fell:/It fell upon a little western flower/Before milk-white, now purple with love’s wounds/And maidens called it Love-in-idleness.” Puck then responds with words decidedly unlike those from the text: “Do you want the bleedin’ love juice or what?”

Helena chases after James to get him to stay. She tells him where Zander and Hermia have run off to. And then we see Zander and Hermia in the woods. They reach the building and break in, then lie together in front of a fire (rather than on the ground, separate, as in the play). Helena and James walk through the woods after them. Oberon watches them as they nearly kiss. But then James turns on her, accusing her of tricking him into going to the woods so she could throw herself at him. James says to her: “Don’t come anywhere near me. I feel sick just to look at you.” And he leaves.

Puck arrives with the love juice, and Oberon points out Helena and tells Puck of her love for a man who doesn’t return her affections. But because Helena is right there and Puck sees her, he can’t later mistake Hermia for Helena. But somehow he still does just that, which just isn’t believable. He finds Zander and Hermia lying next to each other in the building, and puts the drops in his eyes. Interestingly, Puck says a variation of Oberon’s lines from the play: “What you see when you wake/You will for your true love take.” Zander then wakes, and though he’s lying right next to Hermia, he doesn’t look at her, but gets dressed and steps outside to find Helena seated there. Again, that’s not quite believable. In fact, it’s pretty fucking ridiculous. And so he kisses Helena and says, “Why should I settle for second best?” Helena tells him: “You have got some serious commitment issues. Get some help.” Then Oberon puts the love juice in Titania’s eyes. (But there is no changeling boy in this version, so there’s nothing specific that Oberon wants from Titania.)

The Mechanicals rehearse – practicing juggling, singing and card tricks. Bottom tells a joke and wants to do some impressions. They’re on a porch, not off in the woods. Puck is in a tree while Bottom rehearses an impression of Michael Caine. He gives Bottom donkey ears. The others aren’t frightened, assuming the ears are fake, that they’re part of some odd impression. But they leave anyway.

Hermia wakes alone and returns to the resort and slaps James, accusing him of doing something to Zander.

Bottom whistles “Strangers In The Night,” which wakes Titania. She calls for her fairies to lead Bottom to her love palace. Puck tells Oberon about Titania falling in love with a donkey comedian. Then they see James and Hermia. Oberon, upset with Puck over his mistake, says, “Give me some more love juice, or I will give you a midsummer night’s dream where the moon doesn’t shine.” What the hell is that supposed to mean?

Helena and Zander are talking, and Hermia shows up, and so we have the scene of the four lovers, with Puck commenting to us. And we do get mention of some prior thing between James and Helena. James mentions “That time we kissed.” Helena says, “That was twelve years ago.” James and Zander begin fighting. Hermia and Helena fight too, but without those great lines written by Shakespeare.

Act IV begins with Bottom and Titania having just finished making love. She asks, “Where did you learn to make love like that?” Bottom asks Peaseblossom to massage his neck. He also asks for “a nice carrot” rather than hay. Titania suggests they go to sleep, but in this version Bottom doesn’t want to sleep. Titania uses a bit of magic, and off to sleep he goes.

Theo and Polly have an argument. (Imelda Staunton is excellent, as always.) But they soon have it talked out. Oberon, now regretting his anger, has Puck change Bottom’s features back, but before Titania wakes (an odd choice). Titania, when she wakes, tells Oberon: “I dreamt I was in love with an ass. And then I woke up. And what do you know, I still am.” An interesting variation. Oberon apologizes. He says, “No more jealousy.” He then goes into a Shakespeare medley, first reciting the first two lines of Sonnet 39: “O, how thy worth with manners may I sing/When thou art all the better part of me?” He then recites the first two lines of Sonnet 56: “Sweet love, renew thy force; be it not said/Thy edge should blunter be than appetite.” Then he quotes Juliet’s lines from Act II of Romeo And Juliet: “My bounty is as boundless as the sea/My love as deep – the more I give to thee,/The more I have, for both are infinite.” Titania then responds: “How I love thee. How I dote on thee.” An interesting choice, for in the play these are lines she speaks to Bottom.

When Bottom wakes he finds Titania’s underwear in his pocket, so he knows it wasn’t a dream, which of course is quite different from the play. So much for Bottom’s dream.

Helena and Hermia wake before the boys, so they have a moment together. Zander then wakes, but Hermia shies away from his kiss. She remembers him loving Helena, but he doesn’t. Odd. As James wakes, Theo and Polly come upon them in the woods. Theo tells Hermia to be happy. Theo says he and Polly are going to renew their vows (so that will be like the wedding ceremony of Theseus and Hippolyta).

Meanwhile, the Mechanicals are deciding how to proceed without Bottom. Quince admits he’d already received pay for the gig, but hasn’t shared it.

One change I really like in this version is that Helena and James have a more realistic conversation about their relationship. It’s interesting, because in the play Helena does just blindly accept Demetrius’ newfound love for her. Here Helena says, “So I’m, what, the consolation prize.” And she tells him he humiliated her – “And now you’re talking to me like it never even happened.” She’s not easily won, telling him she has stopped being a pushover.

Everyone (except James) arrives for the celebration, and we see Theo and Polly renew their vows. Theo reads a poem he’s written. Puck, Oberon and Titania are there, watching. The Mechanicals are preparing, and Bottom shows up and tells them he’s had the night of his life (Act IV Scene ii). The entertainment begins. But rather than one play they do together, each does his own bit, starting with Snug doing some magic. Puck helps him out. James shows up to woo Helena while the entertainment continues. Bottom is introduced, and there’s a nice reaction shot of Titania, with Oberon looking at her. Bottom is dying on stage, but Titania blows some magic over the audience, who then respond favorably to his act.

This version ends with Puck back up his tree, giving a variation of the play’s final speech. He says: “I wasn’t born offensive. I had to practice…If you did get offended…pretend it were a dream.” He then drops the love juice into the camera lens.