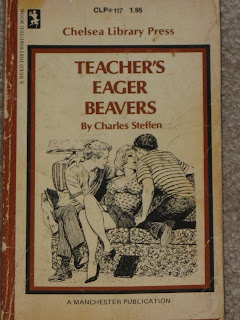 Teacher's Eager Beavers tells the simple tale of a teacher with a preternatural yearning for her male students. There is abuse in her past at the hands of her stepfather, but it seems that her sexual predilection predated that trauma. The abuse did not reach full force until she was an adult.

Laura Brevitz Is A Teacher With Dangerous Desires
Laura Brevitz is a beautiful, twenty-seven year old school teacher. Only three years earlier, her virginity was taken by her stepfather while she watched a teenage neighbor through her window. But now she has decided to take her sexual life into her own hands, regardless of the possible professional and legal consequences.

She has chosen fifteen-year-old Bobby. And perhaps this is a result of her abuse, because the book makes a point of telling the reader that she is the one taking control, whereas before she had no control. And maybe that is one of the reasons she chooses not only a young man, but one who is her student, and thus one with whom she already has a authoritarian relationship.

Bobby is, as the title tells the reader, eager to please his teacher. He's too young to realize he's being taken advantage of, and is only too happy to be getting some sexual experience. And clearly Bobby is not the brightest student, for on page 28 the author writes, "If ever he had received an honor in school, this was it." The author also hints at fear in Bobby, using words and phrases like "afraid," "paralyzed" and "stricken with a kind of freeze" to describe him in the moments leading to their affair.

Jack Stevens, the school's basketball coach, offers Laura Brevitz a job at a boys' summer camp, teaching drama and coaching the camp's talent show. Knowing that Bobby (and ninety-nine other boys) will be there, she accepts the job. She doesn't even try to fight her less-than-honorable urges. This is one of the book's failings. It dodges a chance to really investigate and probe Laura's mental state and any conflict she might feel over her actions. Also, any worries. She seems to have no fear of losing her job or going to jail.

And of course at the camp Bobby only whets her appetite. She tells him plainly that she wants all the boys in his cabin. For is part, Bobby does not react with jealousy, but with enthusiasm. Randy, his friend, is the next to join Laura in her cabin. She tells Randy that she prefers him to Bobby, and admonishes him not to relate that information to his friend.

Randy tells her, "I love you." Because of course someone his age would confuse this physical act for love. Laura coldly does not respond to him, but to tell him to leave. For she has several more appointments to keep that evening.

Her lust of course is completely out of her control, which is interesting, because she seems to have begun this endeavor from a necessity to be in control. And so of course she becomes careless, and another camp counselor discovers what she is doing. She is immediately fired from the camp, but not arrested. While this might seem unrealistic, often camps do try to protect their own interests by covering certain things up. She is also forced to resign her teaching position and move to another town.

While one might see this as a chance for her salvation, it isn't long before Laura Brevitz is up to her old tricks again. Clearly, she has not learned from the consequences, or perhaps it is because the consequences were not harsh enough. Or perhaps the author is opening a debate over how much control one has over his or her own sexual inclinations and drives. While it is generally acknowledged that homosexuality (for example) is a genetic trait and not a choice, perhaps the author is saying that all of our sexual interests and leanings are part of our genetic makeup.

Unfortunately, it is left to the reader to interpret or guess at any theory the author might have, for he does not delve into this topic, but keeps everything basically on the surface.

Teacher's Eager Beavers was published in 1973. It's A Manchester Publication, put out by the Chelsea Library Press.

At the time of this book's publication, the idea of a female teacher engaging in sexual activity with her students most likely seemed the stuff of pure fantasy. But in the intervening years, there have been many documented and highly publicized cases. For example, Felecia Killings actually was an attractive twenty-seven year old teacher who very recently was arrested for sleeping with a sixteen-year-old student.

Probably the most famous case in recent years is that of Mary Kay Letourneau, who went to jail for sleeping with her twelve-year-old student. And then after seven years in prison, Letourneau and her former student actually got married. One could call it a strange happy ending.
Posted by Michael Doherty at 4:35 PM