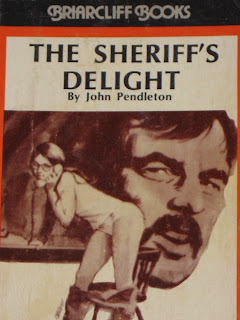 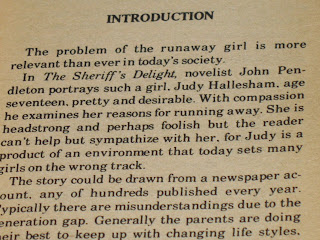 The Sheriff's Delight tells the story of Judy Hallesham, a seventeen-year-old girl who has run away from a strict and religious father only to end up as a slave to a greedy and sadistic motel manager.

Judy has been on the road for a while, and is hungy, and soaked from the rain, and so seeks refuge in the Seaview Motel, hoping to get work there in exchange for a room and some food. Harry Dorne, the motel's manager, offers her a job, a room and food - but in addition to a maid's work, Judy must also provide sexual favors. Reluctant to engage in such activity, but more reluctant to go back into the rain, Judy accepts.

From Runaway To Slave

In the morning she finds that all her personal belongings are gone, including her wallet. In place of her own clothes is a uniform - a dark blue dress with a white collar. Nothing else, not even underwear. That's when she truly realizes the danger she is in. So she tries to escape, but the police of this town are corrupt and in on the action. They catch her and bring her back to the motel.

The sheriff then has his way with Judy, after Moira - another employee/slave girl - warms her up. Judy feels a strange pleasure at Moira's touch. After the sheriff is done, the girls have to get back to work. Moira asks Judy, "Would you like to go to bed with me tonight?" (p. 57), and Judy, shocked, replies, "I'm not that kind." "You will be," Moira tells her.

Judy is later raped on the beach by Carl, a member of the kitchen staff. But during this episode, she finds her body excited. She is mentally revulsed by her body's excitement. The author describes her internal conflict by writing that Carl had "somehow stimulated evil, wanton, bestial urges within her. She couldn't that such depravity was a part of her being" (pp. 72-73).

Judy's actions and decisions seem at least partly informed by her strict father, and her mental attempts to rid herself of his control, his specter. And she does find momentary solace in the embrace of Moira, enjoying the contrast of her soft caresses to the brutal handling by the men. But she learns she can't trust her either, that she is alone.

Harry introduces Judy to Mrs. Randolph, the actual owner of the motel. Mrs. Randolph has her own peculiar desires, which seem to include her brother Jackie and controlling young women (though she vehemently denies being a lesbian). And so Judy is thrust into an even stranger world, where there seems to be little hope of escape.

For this type of book, it's actually not bad. John Pendleton possesses a decent vocabulary, and that certainly helps. And he is creative in his descriptions, not relying on the normal, tired expressions. For example, on page 89, he writes, "She wore a network of burning threads, like metallic nylon from head to toe to fingertip - an electric grid, searing her entire form. She was moving all over, trembling and shivering, quaking, writhing, tossing about, every nerve torn and screaming as she flung into orgasm. She was cumming with a violence so terrible that her mind departed the agonizing struggle." Unfortunately, there is still that common misspelling of the word "come."

And the characters are actually compelling and somewhat believable. After all, Judy does try to escape - she doesn't immediately submit to whatever Harry has devised for her. The author takes the time and trouble to create an atmosphere where it becomes believable that she can't easily escape.

The title of this book is a bit misleading. After all, the Sheriff only uses Judy one, near the beginning (though there is always the fear of the sheriff - one of the things that prevents Judy from running away). Though it is true that the sheriff did take delight in her.

One other interesting note is that at the beginning of the book there is an introduction by the publisher, in which there is an attempt to place the story in a sociological context, and to make it seem like an important study that serves some function other than simply exciting the reader. This introduction ends with the line, "Her story will stand as a warning to all, to those of her age and to their parents."

The Sheriff's Delight was published in 1978 by Publisher's Consultants and Briarcliff Books.

For those interested, I've also written a review of Teacher's Eager Beavers.
Posted by Michael Doherty at 4:31 PM