Measure For Measure's Theme of The Corruptive Nature Of Power 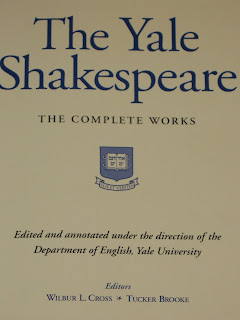 William Shakespeare's Measure For Measure, through the characters of the Duke and Angelo, deals with the theme of power.

Measure For Measure is one of the most intriguing of William Shakespeare's plays. Readers of the play are divided on how they see some of the major characters. Is Isabella an example of purity and chastity, or is she a cold and unfeeling person without charity? Cases can be made on either side.

While a lot of criticism regarding Measure For Measure deals with the theme of forgiveness, it seems that the play's other focus is on the corruptive nature of power. The Duke is one of the strangest, and in a way most despicable characters that Shakespeare ever created. Everything that happens in the play is a result of his actions or inaction - his inefficacy, his lies, his trickery.

At the beginning of the play, he steps aside as ruler, temporarily handing over power to Angelo, a man with an unblemished reputation. The Duke is an ineffectual leader. There have been years of lawlessness in the land as a result of his not wanting to enforce the laws. So rather than step up and begin to act like a leader, he gives his power to another person, Angelo, and bids him to enforce the laws.

Angelo, to his credit, at first doesn't want the position, doesn't want the power. He says, "Let there be some more test made of my mettle,/Before so noble and so great a figure/Be stamp'd upon it." (I. i. 51-53) (Note: all quotes from the play are from The Yale Shakespeare, edited by Davis Harding.)

But of course he can't refuse, for the Duke is his ruler. And the Duke is well aware of his character - Angelo is something of a puritan. Angelo immediately dusts off old laws, such as the one against fornication outside of marriage, and finds a criminal in Claudio. He must make an example so that the people will begin to follow the laws once again. Claudio has impregnated his girlfriend, Juliet, a woman he fully intends to marry. For this crime, Claudio is sentenced to die.

Isabella, Claudio's sister, is a woman who has entered a nunnery but has yet to take the vows. Lucio, Claudio's friend, asks her to use her persuasive powers to petition Angelo for Claudio's life. Isabella at first does a poor job, and is ready to turn away from the task, but for Lucio's further urging. She then appeals to Angelo's charity, and Angelo begins to bend. Perhaps in his heart, he'd like to yield, but he's been charged with the task of enforcing these laws, and bringing order to the land.

But Angelo finds himself attracted to Isabella, perhaps seeing her as an equal to him. It seems that it's her goodness, her religious spirit that affects him, that attracts him. He asks her to love him, promising that he will spare Claudio's life if she will. He uses his new position of power in an attempt to bend this woman to his desires, just as she is asking him to bend to hers. But she refuses. And now Angelo, feeling exposed, becomes angry and lashes out, saying that if she doesn't yield to him, that not only will Claudio die, but that he'll be tortured first.

Isabella still refuses - her virginity is more important to her than her brother's life. She tells Angelo that she will reveal what he has said, but Angelo tells her:

"Who will believe thee, Isabel?
My unsoil'd name, th' austereness of my life,
My vouch against you, and my place i' th' state,
Will so your accusation overweigh.
That you shall stifle in your own report
And smell of calumny."
(II. iii. 164-169)

And he's right. And with his current position of power, he's able to use his prior goodness to ensure he will not be called to task for his current evil leanings.

The Duke Disguises Himself As A Friar

Meanwhile, the Duke has sent word that he's left for foreign territories, but this is not true. Instead, he disguises himself as a friar and spies on his people, to see the results of Angelo's rule. And of course things go horribly wrong. The Duke, through disguise and deceit, tries to make things right.

Through his impersonation of a friar, he hears confession, though he has no right to do so. He takes hope away from Claudio (twice) by telling him he must die (though he's planning on saving him). He tells Isabella Claudio is dead. He urges the provost to deceive Angelo by substituting another criminal's head for Claudio's. He urges Isabella to deceive Angelo - the very man he himself put in charge.

The Duke is aware that Angelo was once to marry a woman named Mariana, and he suggests that Isabella accept Angelo's offer, but then have Mariana be the one in the bed that Angelo goes to (a bed-trick similar to the one in All's Well That Ends Well).

Isabella readily agrees to this idea, and perhaps it's only because the idea came from what she believes to be a priest (that is, a person of power in her chosen field). After all, she's on the path to dedicating her life to religion, to God. Had the Duke been in some other disguise, would she have as readily accepted this plan? Perhaps not. But it is interesting how quickly she latches onto this plan. While feeling that giving up her own virginity to save her brother was vile and wrong, she seems to think it's completely fine to have another woman do so.

Then the Duke hurries to the jail to await the pardon he knows is coming from Angelo. He takes a childish joy in being there to see the results of his schemes. But rather than a pardon, Angelo sends word that Claudio is to die no matter what. Angelo believes that he's taken Isabella's virginity, but he reneges on his end of the bargain. The Duke is upset - not because Claudio is going to die, but seemingly because his scheme has not worked.

He seems to take great pleasure in controlling everyone's destiny, but also in doing so through deceit and disguise, rather than outright. At any time the Duke could simply announce himself and pardon Claudio. But he does not do this.

The Duke Takes What Angelo Wanted

And in the end, the Duke, after regaining his position of power, takes the very thing that Angelo wanted. That is, he takes Isabella, takes her virginity. He says to her, "Give me your hand and say you will be mine" (V. i. 539). Shakespeare gives Isabella no lines at the end of the play, so she accepts the proposal silently. Thus, she never does take her vows as a nun, which is what she had intended. And she is giving up her ideal of chastity. So are the Duke and Angelo really all that different?

Isabella accepts her fate to be married to the Duke. But really, the Duke has been less honest with her than Angelo was. After all, he presented himself as of the religious order. He lied to her about who he was. He lied to her in telling her that Claudio was dead. He urged her to lie to Angelo. Yet she seemingly willingly yields her virginity, her chastity - the thing she holds most dear - to him at the end, without even a word.

The Duke clearly feels that he is doing nothing wrong with all his deceit and treachery. He takes pleasure in it. And in the end, he has nothing to answer for. Because of his position of power, he is not called to task for anything he has said or done. In fact, he is able to mete out judgment to all the other characters. At one point (before his marriage proposal) he even calls to have Isabella arrested for slandering Angelo's good name. He obviously has no intention of following through, but Isabella doesn't know that - he's totally playing with her.

William Shakespeare As The Duke

It has been suggested that William Shakespeare himself portrayed the Duke on stage. Whether true or not, this idea is appealing because the Duke essentially takes on the role of a god, or of the writer of the action of the play. Also, twice the Duke is referred to as "ghostly father" (IV. iii. 44, and V. i. 147). If he did play the Duke, could this line be a reference to the believed fact that Shakespeare also portrayed the Danish prince's father in Hamlet?
Posted by Michael Doherty at 4:10 PM