Shakespeare References in Can’t Buy My Love: How Advertising Changes The Way We Think And Feel 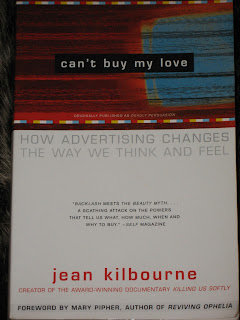 Jean Kilbourne’s Can’t Buy My Love: How Advertising Changes The Way We Think And Feel (originally published as Deadly Persuasion: Why Women And Girls Must Fight The Addictive Power Of Advertising) contains several Shakespeare references. Even the cover contains a Shakespeare reference, as it lists the foreword as being “By Mary Pipher, Author of Reviving Ophelia.” In that foreword, Pipher writes, “They need to learn not only that all that glitters is not gold, but also that it is sometimes poison” (p. 13). That is a reference to The Merchant Of Venice, when the gold casket is opened and the message inside is read. That message begins, “All that glisters is not gold.”

The next reference is to All’s Well That Ends Well. Jean Kilbourne writes, “Writer and cartoonist Mark O’Donnell suggests that someday there will be tie-ins in literature as well, such as ‘All’s Well That Ends With Pepsi,’ ‘The Old Man, Coppertone and the Sea,’ and ‘Nausea, and Periodic Discomfort Relief’” (p. 61). A little later Kilbourne writes, “And an ad for shoes says, ‘If you feel the need to be smarter and more articulate, read the complete works of Shakespeare. If you like who you are, here are your shoes’” (p. 65). Then: “‘Deny yourself an obvious love affair?’ asks an Audi ad, featuring a picture of the car. ‘Didn’t you read Romeo & Juliet?’” (p. 98). Yes, Shakespeare is mentioned in several advertising campaigns. Kilbourne writes: “A 1997 Lexus campaign, introduced just before Halloween, looks like an ad for a slasher film. In one version, the car emerges, as if from flames, from a forest of bare, blackened trees against an orange sky. The copy, in the script of witchcraft and alluding to Shakespeare’s Macbeth, says: ‘Distant thunder, cold as stone,/a V8 screams down from its throne./One by one, each car succumbs./Something wicked/This way comes’” (p. 105). It is interesting that the witch’s line “Something wicked this way comes” is presented as two lines in the ad. The book contains another reference to Macbeth: “Alas, the parody ‘Absolut Impotence’ comes closer to the real relationship between alcohol and sex. Perhaps Shakespeare put it best when he said that drink ‘provokes the desire, but it takes away the performance’” (p. 249). That is a reference to the Porter’s speech. In the notes at the end of the book, Kilbourne writes: “‘Perhaps Shakespeare put it best’: Shakespeare, W. Macbeth. Act 2, Scene 3” (p. 329). The book also contains a reference to The Tempest: “O brave new world, where Addiction is Freedom and Conformity is Rebellion” (p. 310).

There are even a couple of Shakespeare references in the bibliography. The first: “Mohl, B. (1999, January 13). Lend them your ear, and your call is free. Boston Globe, A1, A10” (p. 343). “Lend them your ear” is of course a reference to the beginning of Antony’s famous speech from Julius Caesar. The second is another reference to Reviving Ophelia: “Pipher, M. (1994). Reviving Ophelia: saving the selves of adolescent girls. New York: G.P. Putnam’s Sons” (p. 345).

By the way, unrelated to Shakespeare, but related to another passion of mine, Mary Pipher, in the foreword, writes: “As songwriter Glen Brown wrote, we are all living in ‘one big town’” (p. 13). She meant, of course, Greg Brown, who has a song (and an album) titled “One Big Town,” and a line from that song goes, “One big town/We're living in one big town.” You’d think as this book was previously published under another title, that by now she would have corrected that. Oh well. If you get a chance to see Greg Brown in concert, you should definitely check him out.

Can’t Buy My Love: How Advertising Changes The Way We Think And Feel was published in 1999. The edition I read was the Touchstone Edition from 2000.
Posted by Michael Doherty at 7:52 PM