Shakespeare References in The Herbal Bed 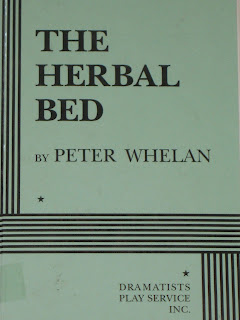 The Herbal Bed is not an adaptation of one of Shakespeare’s plays, but rather is an original work. Written by Peter Whelan, The Herbal Bed is about William Shakespeare’s daughter Susanna, and specifically based on an event from 1613 in which she was accused of adultery. William Shakespeare himself does not appear as a character in this play, though he is mentioned several times. As far as we know, 1613 was the year he stopped writing and lived full-time in Stratford-Upon-Avon, and this play posits that he was sick, perhaps even suffering from gonorrhea.

The last name is first mentioned by Jack Lane, the person who makes the accusation against Susanna: “Oh Susanna Shakespeare…how you did shake!” (p. 26). And just before that, Jack refers to Shakespeare: “The time you ran from your father’s to the river singing all the way” (p. 26). Rafe Smith, the man Susanna is accused of having relations with, at one point refers to Susanna as “the poet’s daughter” (p. 37). And when Susanna is questioned, Barnabus Goche refers to Shakespeare’s work in a negative way: “He says you are not easily detected in your amours because you inherit from your father the art of dissembling. He is of the theatre, is he not?” (p. 71). He then continues, “He acts… so he dissembles” (p. 71).

Susanna mentions Shakespeare’s lack of activity, when talking about him seeing his granddaughter: “Father does so little now. You know how he dotes on the sight of her. Whatever light went out in him she kindles it again” (p. 30). And soon after that, Susanna mentions Shakespeare’s illness: “He won’t admit he’s ill. Take careful note of how he seems today” (p. 31). And then Susanna mentions her greatest fears: “One is that my father may die…and we’ll be helpless to prevent it” (p. 33). Hester confirms Shakespeare’s illness: “Oh he’s very ill. So much so I cried for an hour” (p. 39). Susanna speaks to her husband, John Hall, about it: “I’m not sure… a fever of some kind that comes and goes… he won’t talk to me about it in case I tell you… and he won’t let mother send for you. I tried to get Hester to question him while she was there but he realised right away” (p. 42). And by the end, Shakespeare is coming to see John Hall, as Susanna says: “It’s father… he’s agreed to be brought over to us. We’ve got the room ready” (p. 79). John asks, “Your father… did he have the tincture for the ulcers?” (p. 80). And that’s when Susanna admits to thinking her father had gonorrhea: “It’s what I thought he had then, yes” (p. 80). John replies, “You must know… he’s far beyond that now” (p. 80). He then rails against himself, “For suddenly here’s the father of my own wife desperate for cure and here am I… helpless!” (p. 80). At the end, Susanna says, of her father: “He was a liar, too. Must have lied to my mother every time he came home. Yet when he was with us… we were so warm” (p. 81).

New Place is also referred to a couple of times in this play. Susanna says to Hester, “No… I’ll do it… for I wouldn’t want you late at New Place” (p. 30). Later Hester says, “Because an hour before I had gone round to bring back milk from the evening milking to New Place” (p. 76).

By the way, the book mentions that this play “was first produced by the Royal Shakespeare Company at The Other Place, Stratford-upon-Avon, England on May 8, 1996” (p. 3), with David Tennant and Joseph Fiennes in the cast. The book was published in 1999.
Posted by Michael Doherty at 12:10 PM