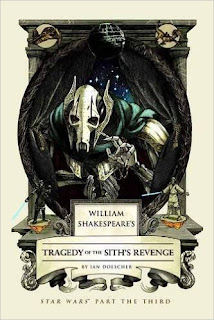 Revenge Of The Sith was far and away the best of the three Star Wars prequels. Ian Doescher combines that screenplay with the work of William Shakespeare to create William Shakespeare’s Tragedy Of The Sith’s Revenge: Star Wars Part The Third, completing the six-book series. As with the other volumes, this book is divided into five acts and is presented mostly in iambic pentameter.

The prologue is delivered by the Chorus as a sonnet. As in other books in the series, lines are given to characters that don’t speak in the films. For example, in this book, the vulture droids speak. And of course, there are many references to the works of Shakespeare. Anakin Skywalker turns to Julius Caesar when speaking with Dooku: “Cowards die many times before their deaths;/The Jedi never taste of death but once” (pages 23-24). Of course, in Act II scene ii Caesar says, “The valiant,” not “The Jedi.” Later Anakin has a little play on the title of All’s Well That Ends Well when he says, “Methinks all’s well – that might have ended worse” (p. 27). He also quotes Romeo: “I have more care to stay than will to go” (p. 39).

Palpatine, interestingly, takes the role of Hamlet when he instructs the players to perform a certain piece for Anakin. He says to Player 1, “I heard thee speak me a speech once, but ‘twas/Ne’er acted; or, if ‘twas, not above once” (p. 64). Player 1 plays the role of Oedipus as a Tusken Raider. Then Anakin use Hamlet’s words about being played “as one would play a pipe” (p. 67). The story of Darth Plagueis is performed by the players, an interesting choice. Anakin turns to Hamlet again when talking to Padme: “I have of late – but wherefore I know not – /Lost all my mirth” (p. 78). And once Anakin becomes Darth Vader, he quotes from Act IV Scene iii of Timon Of Athens: “the moon’s an arrant thief,/And her pale fire she snatches from the sun” (p. 104). Vader also turns to Othello when he goes to the Jedi temple to dispatch the young Jedi: “I would not kill your unprepared spirits;/No, heav’n forfend! I would not kill your souls” (p. 116). The first youngling responds with Desdemona’s line, “Talk you of killing?” Vader also quotes King Lear: “I am a man more sinn’d against than sinning” (p. 143), before returning once again to Hamlet: “Aye, there’s the rub” (p. 143). Vader also refers to Macduff’s line toward the end of Macbeth when he says, “But from that home, that mother, was I ta’en,/Untimely ripp’d from her beloved arms.”

Ian Doescher adds a scene in which two Jedi discuss the mysterious Order 66, which was missing from the written codes. This is a nice bit of foreshadowing, which of course is interesting, because it’s unlikely that anyone who reads this isn’t already familiar with the Star Wars films. And for that reason, the foreshadowing becomes rather humorous.

In addition to Shakespeare, this book makes some other playful references. For example, Mace says, “Prithee, listen not to how the black/Snake moaneth unto thee” (p. 100). Black Snake Moan stars Samuel L. Jackson, the actor who plays Mace in the Star Wars films. Mace then says, “A time to kill hath, in its time, arriv’d.” (A Time To Kill is another film starring Samuel L. Jackson.)

William Shakespeare’s Tragedy Of The Sith’s Revenge: Star Wars Part The Third was published in 2015 by Quirk Books.
Posted by Michael Doherty at 9:51 PM