Shakespeare References in In The Boom Boom Room 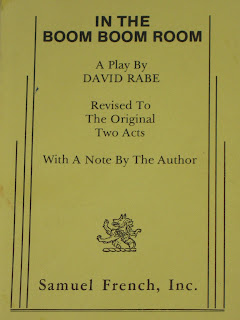 Shakespeare references continue to pop up in most of the things I read. While Shakespeare and his works aren’t actually referred to in David Rabe’s play In The Boom Boom Room, Shakespeare is mentioned twice at the beginning of the book. The first reference: “In The Boom Boom Room was first produced Off-Broadway by Joseph Papp on December 4, 1974 at The New York Shakespeare Festival Public Theater under the direction of Robert Hedley” (p. 5). The second reference is in the description of the set: “The set should be a space with areas and levels similar to a Shakespearean stage, but all within a metaphor of bars and go-go dancing” (p. 8).

The edition I read was the Samuel French publication, the play revised to the original two acts, and includes a note by David Rabe at the end.
Posted by Michael Doherty at 4:55 PM