The Life And Death Of King Richard III (1912) DVD Review 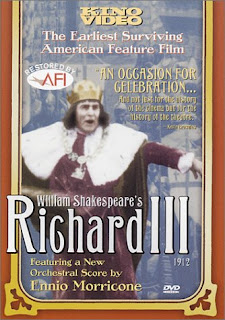 The Life And Death Of King Richard III is the earliest surviving full-length American film, and the first feature film based on a Shakespeare play. It stars Frederick Warde as Richard the Third, and was directed by James Keane. It was released in October of 1912, and was restored by AFI in 1996, with music composed and conducted by Ennio Marricone.

The film opens with a shot of soldiers marching, the first title card reading: “After the battle of Tewkesbury. Death of Prince Edward of Lancaster.” We see Richard demand to see King Henry. And then a title card tells us, “Murder of King Henry VI, the last of the house of Lancaster, as King Edward of York enters London.” And then we see Richard stab Henry with a dagger. Then, just to make sure, he runs the corpse through with his sword a couple of times, then cleans the blood off with his other hand.

The next subtitle reads, “Lady Anne Plantagenet, widow of Prince Edward, receives body of King Henry, for burial.” We see the corpse brought in. A title card tells us, “Lady Anne wooed and won by Duke of Gloster.” (It’s interesting that no dialogue is given to us in subtitles, not even the play’s most famous lines. But rather the titles are used to tell us what happens in the following scene.) Richard interrupts the funeral procession to woo Lady Anne. While on one knee he offers her his sword to kill him, and for a moment it seems she will. Twice more she raises the sword against him, but finally lets it drop, defeated. He watches it fall, and only then does he rise.

A title card reads: “Court of King Edward IV. Gloster incites quarrel between the King and Clarence.” And we see the arrest of the Duke of Clarence, and Richard visiting him in the tower. The two murderers kill Clarence almost immediately upon entering, whereas in the play, they have all that wonderful dialogue about whether they should do it and so on.

A title card tells us, “Death of King Edward IV.” And we get a brief scene of Edward IV dying, while Richard and others look on. In the play, he dies offstage.

Title card: “Princes Edward and York, sons of Edward, are brought to London.” We see them arrive, where they are greeted by Richard. And we do get a shot of one of them mocking Richard by imitating him.

And we do see Richard entering onto the balcony between the two bishops and carrying a prayer book, after twice declining the crown. And when he accepts, the crowd cheers. This whole sequence is really good, particularly afterward when we see the two bishops exit and Richard immediately flings the prayer book aside.

A title card tells us, “Gloster orders the young Princes to be taken to the Tower.” After that we see the coronation of King Richard the Third. Another title card tell us, “Buckingham, being refused his promised reward, leaves the court of Richard, with defiance.”

A title card says, “The Princes are murdered in the Tower.” We see the princes say their prayers and then go to bed. The two murderers enter and smother them, something that occurs offstage in the play. They then demand their pay of Tyrrell, who waits just outside the door. Tyrell then goes to tell Richard, who is clearly cheered by the news.

A title card reads: “Richard attempts to woo Princess Elizabeth, the daughter of the late King Edward. Her mother summons the Earl of Richmond from France to protect her.” For a moment, it seems that this film version has completely forgotten about Lady Anne. Part of the problem is that Queen Margaret is cut completely. But it seems that Lady Anne is wooed and then forgotten. We do get a shot of the letter Elizabeth has written to the Earl of Richmond.

A title card tells us, “Richmond sails from France,” and there’s actually a shot of the boat sailing toward shore (and the camera movies a bit in this shot, to keep the boat in frame). Interestingly, it is then that we get the title card, “Death of Lady Anne,” her death coming later than in the play. In the play, we learn of her death right after the princes are murdered. It’s an interesting shot, with Lady Anne asleep in bed in the foreground, and King Richard instructing someone to poison her, seen partially in shadow in the background. Lady Anne drinks the poison and dies immediately.

A title card tells us, “Richmond visits the Princess Elizabeth, to whom he is betrothed.” It’s interesting, because it sort of gives the impression that the battle is over Elizabeth. The next scene is Richard and his army departing to meet Richmond. A title card tells us, “Richard’s dream, the night before the battle.” In this version, the Ghosts all appear simultaneously (ah, early special effects), and point accusingly at Richard. Richard rushes out of his tent and falls to the ground. He is helped up by his men, and they rush off to battle. The battle scenes are all done in fairly wide shots. There is a shot of Richard’s corpse at the end.

The DVD includes Rediscovering Richard: Looking Back At A Forgotten Classic, a seventeen-minute featurette which has interviews with Jean Picker Firstenberg, the director of the American Film Institute, and Bill Buffum, the man who donated his copy of the film to AFI. Buffum talks about working as a projectionist and about collecting films, including acquiring The Life And Death Of King Richard III. This featurette also goes into some of the other early silent Shakespeare films, and includes a bit of information on actor Frederick Warde.
Posted by Michael Doherty at 10:12 PM