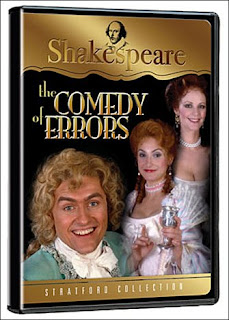 This version of The Comedy Of Errors is a Canadian Broadcasting Corporation’s presentation of a stage production by The Stratford Festival Of Canada. The stage production was directed by Richard Monette, and it was directed for television by Norman Campbell. With this play, there is always the question of how to do the two sets of twins, and how alike they should look and so on. This production uses just one actor (Geordie Johnson) for both of the Antipholus characters, and one actor (Keith Dinicol) for both of the Dromios.

The film opens with a shot of a clock striking twelve noon. Titles tell us this is “The Duke’s Palace” in “The Port Of Ephesus.” Aegeon’s opening speech is cut, and this production begins with Duke’s “Merchant of Syracusa, plead no more.” Aegeon delivers his long speech out to the audience.

The second scene has a title card as well: “The Market In Ephesus.” The first line, as spoken, is “Here, sir, say you are of Epidamnum” rather than “Therefore give out you are of Epidamnum.” There is some nice physical humor in this scene, as well as some sexual innuendo (like on “I am invited, sir, to certain merchants”). The clock has a place above the stage, constantly hanging over the action, and it’s referred to on the line, “Soon at five o’clock.”

Oddly, when Dromio of Ephesus arrives, a title appears: “The Wrong Twin Servant.” That’s pretty weak. And if the production had to rely on such things, how was the audience in the theatre kept apprised? Perhaps it was simply a note in the program.

The second act begins with a title, “The House Of Antipholus Of Ephesus,” and then with an added line, as Adriana tells Luciana, “It’s two o’clock,” time playing a big role in this production. When Dromio recounts his conversation, “quoth” is changed to “said.” And then rather than Luciana asking, “Quoth who?” everyone on stage asks, “Said who?”

The title at the beginning of the second scene is “The Market In Ephesus.” Antipholus of Syracuse has a very playful, amused attitude toward Dromio, and even when Adriana (Goldie Semple) and Luciana (Lucy Peacock) enter. He looks up at the clock on the line “In Ephesus I am but two hours old,” looking at it after “but.” After “or idle moss,” there is a lighting change and all characters but Antipholus freeze. Antipholus then does his next speech, “To me she speaks…” to the audience, moving about the stage, and at the end returns to his initial position so the action can resume. The same thing happens when Dromio speaks of “goblins, owls and sprites.” It’s an interesting effect, giving us a stronger sense of the otherworldly forces they believe are at work here.

A shot of the clock at the beginning of the third act tells us it’s 3:15 p.m., and after a cute little dance a title card tells us, “The other Antipholus arrives home.” He, his Dromio, Angelo and Balthazar have obviously all been drinking. Balthazar sports a ridiculously tall wig. Because one actor plays both Dromios, the conversation between them at the gate is played in such a way that we see only the outside of the gate, and the other Dromio’s lines come from within (perhaps recorded?). Balthazar hiccups often during his long speech, and belches once. Antipholus of Ephesus says “Porcupine” rather than “Porpentine.”

A shot of the clock at the beginning of the second scene lets us know it’s now 3:30 p.m. Luciana adds a screeching, comical “What?” to this scene when Antipholus indicates he’s interested in her. When he asks for her hand, she almost gives it to him before coming to her senses and exiting. Dromio of Syracuse is hilarious in this scene, when talking about Luce, the kitchen wench. Angelo is still inebriated when he enters with the chain. He too says “Porcupine” rather than “Porpentine.”

There’s an added comic chase with Luce after Dromio. The fourth act then begins with the title card, “A Street In Ephesus.” The title at the beginning of the second scene reads, “The House Of Antipholus Of Ephesus,” and a shot of the clock shows it to be 4 p.m. And the third scene begins with a title reading, “A Street In Ephesus.” It opens in that altered state, with everyone frozen except Antipholus of Syracuse, who delivers his opening speech to the audience. There is a wonderful moment after Dromio gives him the money and they both think the place itself is playing with them both, that it’s not the fault of Dromio or miscommunication. They are both silent in fear, and it’s seriously funny. The Courtesan is given a rather grand entrance. At the end of the scene she tosses a flower to a man in the audience, and it’s the only time we see any of the audience (though this shot might have been done later, for it’s close and steady on just two people, with everyone else in darkness, and seems anticipated if not altogether fabricated).

A shot of the clock tells us it’s 4:30 p.m. when the next scene begins, and a title card reads, “A Street In Ephesus.” The action freezes again for Dromio’s aside. But this Dromio’s speech is not related to witchcraft or dreams, so it doesn’t really work. It feels like the film has sort of broken the pattern, and now it’s simply about asides. Doctor Pinch is also given a rather elaborate entrance.

The fifth act begins at 4:45 p.m., with the title card, “Another Street In Ephesus.” In this version, the Merchant and Antipholus of Syracuse do fight with foils, and the fight is set to music. A title card reads, “The Abbey,” and when Antipholus of Syracuse and Dromio arrive, their knocking is in time with music. The clock chimes five o’clock, making the Merchant’s line “By this, I think, the dial points at five” comical. Of course at the end, four actors are needed, and so two others appear, with their backs to the audience. The film of course gives us no close-ups of the other two. And much of their dialogue is cut. For example, we go from the Duke’s “Which accidentally are met together” to Adriana’s “Which of you two did dine with me today?” And in other cases the main actors speaks lines of both characters.

The DVD, part of the Stratford Collection, contains no special features.
Posted by Michael Doherty at 7:54 PM