The Lodger Shakespeare: His Life On Silver Street (2008) Book Review 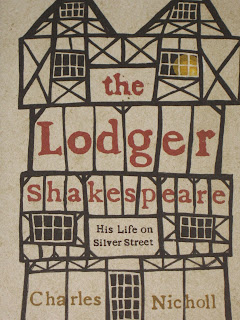 In The Lodger Shakespeare: His Life On Silver Street, Charles Nicholl uses court documents to help reconstruct the time when William Shakespeare lodged with the Mountjoys. So the book focuses on the years 1603 – 1605, and relates some of what was happening with the Mountjoy family to the plays Shakespeare was working on at that time. The book traces the Mountjoy family as well, even a bit outside of their relation to Shakespeare. And Nicholl suggests that Shakespeare’s time there might have had an effect on the foreign characters he was creating. Nicholl writes: “And when the play went on tour, even Caius’ Frenchness becomes vague. In the 1602 quarto of Merry Wives, which is based on an abridged touring version of the play, Caius slips into German as well as French, suggesting that any old foreign accent or lexicon was sufficient when playing to provincial audiences” (p. 183). And: “In Shakespeare, and particularly in Shakespearean comedy, real English life as it was experienced by his audience was shown to them through a prism of foreignness, by which process it was subtly distorted and magnified. In this sense the foreign – the ‘strange’ – is an imaginative key for Shakespeare: it opens up fresher and freer ways of seeing the people and things which daily reality dulled with familiarity. It is his way into the dream world of comedy. He did not, as far as we know, ever leave the shores of England” (p. 193).

Interestingly, George Wilkins also plays a part in the case. Nicholl writes, “Shakespeare knew this dangerous and rather unpleasant character – indeed it is almost certain Wilkins wrote most of the opening two acts of Pericles” (p. 16). Stephen and Mary Belott, after their marriage, lived at George Wilkins’ house. “As we know, the ‘victualler’ George Wilkins was also a writer. He was, or became, a literary associate of Shakespeare – for a while a collaborator with Shakespeare – and so his brief appearance at the Court of Requests opens up something rather rare: a specific biographical context for a Shakespeare play. The play is Pericles, probably first performed in early 1608, and published the following year. The broad consensus among literary historians is that Wilkins wrote most of the first two acts and Shakespeare almost all of the rest” (p. 198). Nicholl then writes: “It is more or less exactly at this time, in the summer of 1605, that there begins an identifiable literary connection between Wilkins and Shakespeare. At this point, as far as the evidence remains, Wilkins was an unknown and unpublished author. But some time in or shortly after June 1605 he began work on a play for Shakespeare’s company, the King’s Men. The play was Wilkins’s best and most charismatic work, The Miseries of Enforced Marriage” (pages 207-208). He then adds, “This skeletal and partly speculative narrative – a story of mutual literary opportunism – is a kind of prelude to Pericles, for it was doubtless the success of the Miseries, still onstage in 1607, that led to Wilkins’s collaboration with Shakespeare on Pericles” (p. 221). And regarding the character Marina, Nicholl writes: “It occurs to me that Marina in the bawdy house at Myteline might have some traces of a real person in a real situation – Mary Belott in the house of Wilkins. Her arrival there marks the first known connection between Shakespeare and Wilkins, and her presence there may have had a similar aspect of sexual vulnerability, of innocence cast among the wolves – or anyway may have been construed that way by Shakespeare, who cared about her and who perhaps felt some pangs of avuncular anxiety about the rackety circumstances in which she now found herself” (p. 223).

Later Nicholl comes back to Mary: “I have been teased by the possibilities of Shakespeare’s relationship with the charming Mrs. Mountjoy, but perhaps the person at the heart of the story is her daughter Mary, of whom we know next to nothing until she steps into the limelight of the Belott-Mountjoy suit. Her life touches Shakespeare’s in this circumstantial way, but seems also to touch his imagination. She is betrothed to a reluctant husband, as Helena is in All’s Well; she is banished ‘dowerless’ by the father, as Cordelia is in King Lear; she is lodged in the house of a pimp, as Marina is in Pericles. She is not the ‘model’ for these characters, any more than Stephen is the model for the recalcitrant bridegroom Bertram, but there are traces of her in them: a real young woman, living in the house where Shakespeare writes, and in the house of his co-author Wilkins. Was it Mary’s hands Shakespeare saw in his mind’s eye when he wrote in Pericles of a girl weaving silk ‘with fingers long, small, white as milk’?” (p. 270). Sure, this is speculation, but it’s intriguing.

This book also, in the appendix, includes the documents regarding the Belcott-Mountjoy case. So you can read them for yourselves and come to your own decisions. There are also some photos of the documents, and other photos related to the time.

The Lodger Shakespeare: His Life On Silver Street was published in 2008 by Viking Penguin.
Posted by Michael Doherty at 8:37 PM