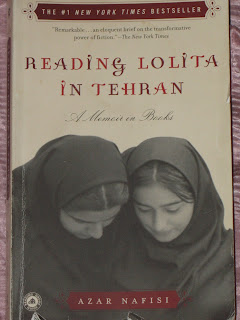 Azar Nafisi’s Reading Lolita In Tehran: A Memoir In Books contains a few Shakespeare references. The first two are to Hamlet. Nafisi writes: “The only one among us who claimed she had never experienced such fear was Nassrin. ‘I was always afraid of having to lie. You know what they say: to thine own self be true and all that. I believe in that sort of thing,’ she said with a shrug” (p. 46). That, of course, is a reference to Polonius’ advice to Laertes in the first act of the play. And then a little later Nafisi writes: “‘The problem with the censors is that they are not malleable.’ We all looked at Yassi. She shrugged as if to say she couldn’t help it, the word appealed to her. ‘Do you remember how on TV they cut Ophelia from the Russian version of Hamlet?’” (p. 50). She continues: “‘That would make a good title for a paper,’ I said. ‘Mourning Ophelia’” (p. 50).

The others are references to Shakespeare himself. Nafisi writes: “These are my memories of Norman: red earth and fireflies, singing and demonstrating on the Oval, reading Melville, Poe, Lenin and Mao Tse Tung, reading Ovid and Shakespeare on warm spring mornings with a favorite professor, of conservative political leaning, and accompanying another in the afternoons, singing revolutionary songs” (pages 83-84). Then: “He taught drama and film – Greek theater, Shakespeare, Ibsen and Stoppard, as well as Laurel and Hardy and the Marx Brothers” (p. 139). And then just a bit later she writes, “Heated debates had ensued in that packed meeting as drama students demanded that Aeschylus, Shakespeare and Racine be replaced with Brecht and Gorky, as well as some Marx and Engels – revolutionary theory was more important than plays” (p. 139).

Nafisi also at one point mentions the new Globe in London: “I acted as if we were talking about a normal trip, a routine visit to her older sister in London – it’s far too wet at this time of year; do ask them to take you to the Globe” (p. 322).

Reading Lolita In Tehran: A Memoir In Books was published in 2003.
Posted by Michael Doherty at 8:03 PM