Scientology: A New Slant On Life – Yet Another Cult Classic by L. Ron Hubbard 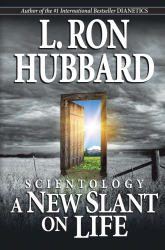 Scientology: A New Slant On Life is a volume in the series of books on the science or religion or philosophy that L. Ron Hubbard created, and which many people have latched onto to help them deal with the confusions of life. At the beginning of the first chapter “Is It Possible To Be Happy?” L. writes: “Very often an individual can have a million dollars, he can have everything his heart apparently desires and is still unhappy” (p. 7). I don’t very often have a million dollars. In fact, I’ve never had a million dollars. What individual is he talking about here? Nobody I know, that’s for sure. Perhaps L. is talking about himself. I think he very often had a million dollars. I suppose it helps to own and run a lucrative cult.

In the same chapter, L. describes a couple having an argument, then writes: “Well, what do we do in a condition like this? Do we just break up the marriage? Or touch a match to the whole house? Or throw the kids in the garbage can and go home to Mama?” (p. 9). Interesting options L. has come up with. Clearly this is a guy with some personal issues of his own. One argument, and he thinks burning down the house and killing the children might be options. And once he’s killed the children, he thinks he can freely return to his Mama.

If you’ve read any of L.’s other cult classics, you’ve likely noted his obsession with the atomic bomb. In this book, he’s able to get all the way to page 12 before mentioning it. Good for him! He then mentions it again on p. 48 (“We in Scientology belong in the ranks of the seekers after truth, not in the rear guard of the makers of the atom bomb”) and on p. 74 (“Sure it’s incredible. But so is an A-bomb, a few pennyweights of plutonium, which can blow a city off the chart”) and on p. 236 (“as has been done with atomic weapons and certain drugs designed by the military”). By the way, L. is also obsessed with cheating wives, using them as examples over and over.

L. asks, “What is personal integrity?” He is also kind enough to provide an answer: “Personal integrity is knowing what you know. What you know is what you know and to have the courage to know and say what you have observed. And that is integrity and there is no other integrity” (p. 19). Okay, then! That’s settled. What I know is what I know. No argument from me, L. And in the very next paragraph he writes: “And not necessarily maintaining a skeptical attitude, a critical attitude or an open mind – not necessarily maintaining these things at all – but certainly maintaining sufficient personal integrity and sufficient personal belief and confidence in self and courage that we can observe what we observe and say what we have observed” (p. 19). Yes, it has been found that a critical attitude and an open mind are often detrimental to one’s ability to get along within a cult. However, a little later L. writes, “Examine the subject of Scientology on a very critical basis, not with the attitude that when you were in school you learned that such and such was true and since you learned that first, the first learning takes precedence” (p. 40). L. certainly likes to create his own peculiar sentence structures.

And if you’re curious just what Scientology is, L. tells us, “Scientology is the science of knowing how to know answers.” When did sciences begin receiving tax-exempt status? Perhaps when the science in question promised to grant immortality. “A Scientologist can make an individual well, happy and grant him personal immortality, simply by addressing the human spirit” (pages 26-27). And later L. claims, “I must face the fact that we have reached that merger point where science and religion meet, and we must now cease to pretend to deal with material goals alone” (p. 48).

Regarding the memory lapses that people face from time to time, L. offers this explanation: “The amount of time which he has spent on Earth and the number of deaths through which he has gone have brought him into a state of forgetfulness about who and where he has been” (p. 27). And where his keys are. Every time I die, I tend to forget the capital of Wyoming. But that’s my own struggle, I suppose. Perhaps Scientology can help me.

L. goes over a lot of the same stuff he covered in other books, like the so-called “A-R-C Triangle,” the idea of life being a game, and so on. If you’ve read one of his cult classics, you’ve pretty much read them all. And in this one, he directly takes entire passages from other books and inserts them here. For example, do you remember this wonderful line from The Problems Of Work: Scientology Applied To The Workaday World: “When one turns loose an automobile wheel and hopes the car will stay on the road, by luck, he is often disappointed”? Well, that line is included in this volume as well, on page 115. He also repeats this fantastic idea: “Confusion is the basic cause of stupidity.” I would have thought that worked in reverse, that stupidity might cause confusion. But then again, I’m not a Scientologist. Later he says, “Confusion is stupidity” (p. 118). Could it be the cause of itself? What an intriguing idea, L!

Regarding confusion, L. writes, “In a stream of traffic, all would be confusion unless you were to conceive one car to be motionless in relation to the other cars and so to see others in relation to the one” (p. 117). Sadly, I think it’s often my car that is the one to be motionless in traffic. I always seem to get in the one lane that is reluctant to move forward. I just wave to all the Scientologists driving by using my car to relieve them of their confusion.

L. also repeats the wonderful “This is a machine” anecdote from p. 25 of The Problems Of Work: Scientology Applied To The Workaday World. Here it appears on p. 118. Well, now we know how L. was able to write so many books. Odd that Scientologists didn’t notice this repetition and feel just a bit ripped off at buying the same book over and over under different titles.

Toward the end of the book, L. feels a need to defend Scientology, though he offers no excuse for the repetition of passages in his books. He has called Scientology a science and a religion; here he refers to it as a philosophy, while also speaking of himself in the third person. “A philosopher developed a philosophy about life and death,” he writes (p. 259). Yes, he calls himself a philosopher. Oh boy!

He tells us what he calls “the true story of Scientology” (finally!). After he developed it, people found it interesting, people found that it worked, people passed it along to others, and it grew. That’s it. But what’s wonderful is what he writes after that poignant true story: “When we examine this extremely accurate and very brief account, we see that there must be in our civilization some very disturbing elements for anything else to be believed about Scientology” (p. 259). He continues: “These disturbing elements are the Merchants of Chaos. They deal in confusion and upset. Their daily bread is made by creating chaos. If chaos were to lessen, so would their incomes.” Certainly there is no hint of paranoia or exaggeration here.

He then goes on to defend Scientology by speaking very highly of himself in the third person: “In actual fact, the developer of the philosophy was very well grounded in academic subjects and the humanities, probably better grounded in formal philosophy alone than teachers of philosophy in universities. The one-man effort is incredible in terms of study and research hours and is a record never approached in living memory” (p. 261). Wow! L. has no bigger fan than himself. Though he clearly thinks everyone is a fan, as he writes: “Therefore, since 1950 I have had Mankind knocking on my door. It has not mattered where I have lived or how remote. Since I first published a book on the subject, my life has no longer been my own” (p. 273).

By the way, L. claims it is the Merchants of Chaos who have used the term “cult” with regard to Scientology. In the lengthy glossary at the back of the book, “cult” is defined as “an exclusive or closed (one which is not open or in communication with others) group of people who share some common interest or belief” (p. 306). Because Scientology is constantly trying to gain new members, this definition of “cult” does not apply, and so the odd logic here is therefore Scientology is not a cult. However, Merriam-Webster defines “cult” as “a small religious group that is not part of a larger and more accepted religion and that has beliefs regarded by many people as extreme or dangerous.” You decide whether that applies.
Posted by Michael Doherty at 6:50 PM