The Problems Of Work: Scientology Applied To The Workaday World – Another Cult Classic by L. Ron Hubbard 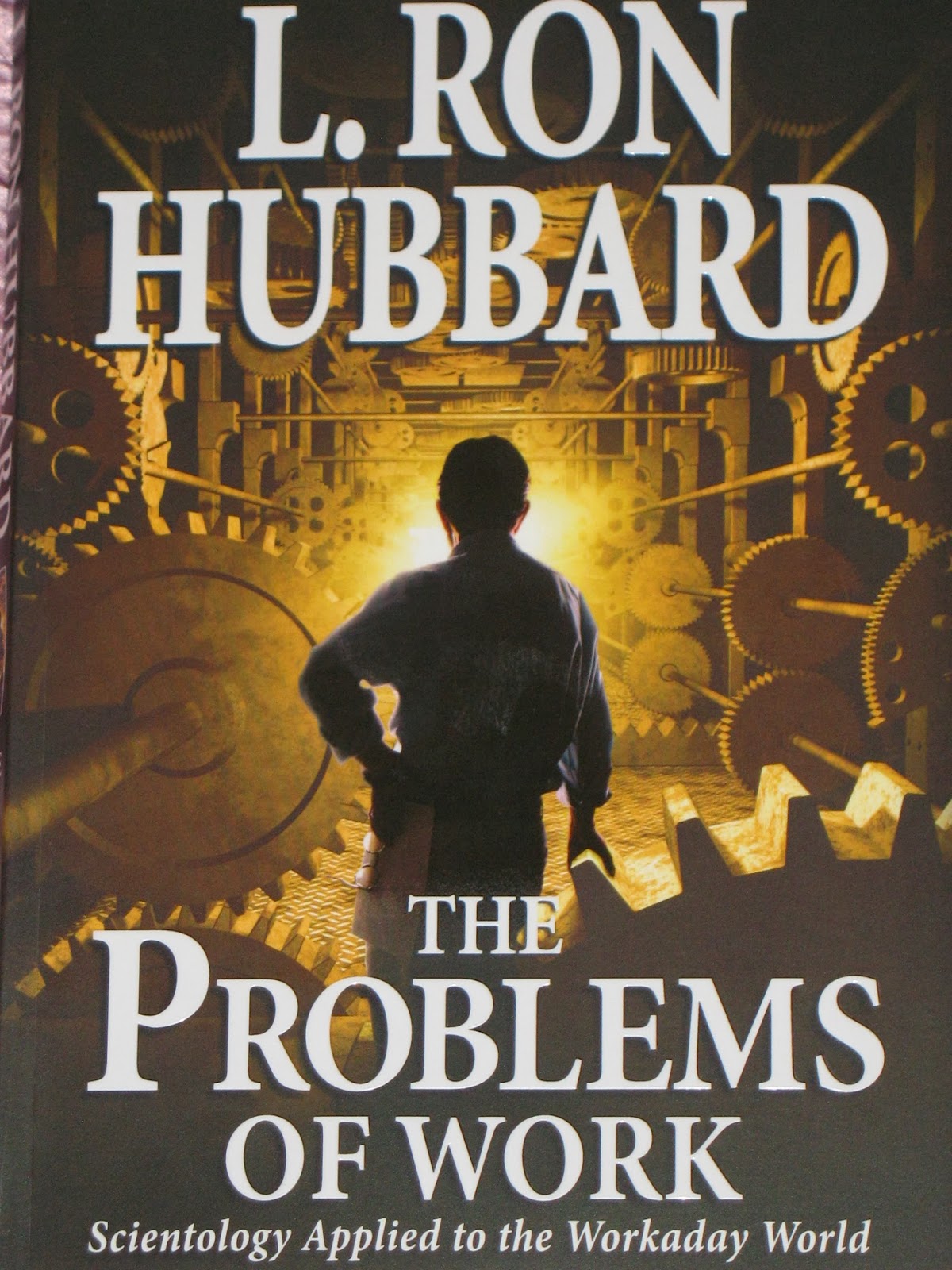 L. Ron Hubbard, the creator of Dianetics and Scientology, understood that he had to keep his followers busy, and had to keep them buying. So, to relate Scientology to every aspect of his followers' lives, he produced a large number of books, including The Problems Of Work: Scientology Applied To The Workaday World.

He begins the book with one of his great claims: “Scientology is already in use in many of the larger businesses of Earth” (page 1). He, of course, offers no examples. He lists no specific business, but does specify that they are “of Earth.” It might seem a silly distinction to make, but L. was a science fiction writer, so his loyal readers probably needed that made clear.

Soon he makes another of his amazing claims: “Scientology is something new under the sun. But, young as it is, it is still the only completely and thoroughly tested and validated science of existence” (p. 14). So it’s a science, not a religion? Why does it have tax-exempt status then? Well, his wild claims continue: “Scientology can, and does, increase human intelligence. By the most exact tests known, it has been proven that Scientology can greatly increase intelligence in an individual. And Scientology can do other things. It can reduce reaction time and it can pull the years off one’s appearance” (p. 14). Wow, it can make you smarter, more alert and better looking.

“Confusion is the basic cause of stupidity. To the stupid, all things except the very simple ones are confused. Thus, if one knew the anatomy of confusion, no matter how bright one might be, he would be brighter” (p. 22). I’m a bit concerned, because this book is confusing me, and as I just learned, that could lead to stupidity. I suppose the best thing would be to stop reading this and go read something that is more clearly written.

Regarding how to handle a confused employee, L. writes: “‘This is a machine,’ you say. Then make him sure of it. Make him feel it, fiddle with it, push at it. ‘This is a machine,’ tell him. And you’d be surprised how long it may take, but you’d be surprised as well how his certainty increases” (p. 25). Yes, after a while he will be certain that the machine is a machine. Or you could hire someone who is a little less regarded and already understands that it’s a machine. Then you could start right in on what he or she is actually supposed to do with the machine, rather than spending a day convincing your new employee that it is a machine.

Confusion is certainly the problem. L. writes: “So long as one is being confused by confusions, all he can think about are destructive things – what he wants to do most is to destroy the confusion” (p. 26). That is so true. Whenever confusions are confusing me, my thoughts turn to destruction of confusion rather than trying to reason or compromise with confusion.

As always, L. is obsessed with insanity, which he equates here with an inability to work. “As the amount of automatic machinery increases in our society, so increases the percentile of our people who are insane” (p. 34). He also believes that giving jobs to insane people will cure them of their madness. Sure, but please don’t let them pilot airplanes or sort my mail.

By the way, if you felt safe from madness, you might want to think again. L. tells us, “Insanity is contagious” (p. 61). I once caught the crazy from a girl I was seeing, but I’m better now. L. continues: “Confusion is contagious. Have you ever talked to a confused man without yourself, at the end of the conversation, feeling a little confused? Thus it is in work” (p. 61).

Interestingly, L. equates work, and all of life, with a game. He believes that people need enemies, or opponents, and that if they don’t have them, they will invent them. An odd, somewhat paranoid viewpoint. Is it possible that L., the leader of a cult, wasn’t entirely stable?

On page 72, he writes, “The subject of this book is work.” A handy little reminder, because sometimes it’s unclear just what the hell he’s going on about. Thanks, L.

Throughout the book, L. talks about vague cases of individuals, people who must have only been able to get the help they needed through L.’s organization. At one point he talks of a girl who was unhappy and as a result was doing poorly at her job. “Now ordinarily in the workaday world, the office manager would have dismissed her and found another girl. But employment was critical at the time and this office manager knew the modern thing to do: He sent for a Scientologist” (p. 86). That’s just what I would do. I certainly wouldn’t attempt to talk to the girl on my own. Leave that to the experts. It’s best to send for a Scientologist. Just ring up the office and order one, like calling for a taxi or an exorcist.

L. writes: “If a man were to go all the way around an office in which he had worked for years and touch the walls and window ledges and the equipment and tables and desks and chairs – ascertaining carefully the feel of each one, carefully locating each one with regard to the walls and other items in the room – he would feel much better about the entire room” (p. 78). This is a point that is so important that it’s illustrated on the following page, and below the illustration the point is repeated. And look, there’s a little star where the guy touched each object. He’s creating his own little constellation in his work environment. I think it’s interesting that there are no other employees in the drawing. Perhaps that’s because if there were, they’d all be staring at him or even wrestling him to the floor. After all, it’s difficult to get your own work done when a fellow employee wants to touch everything on your desk and create little stars. 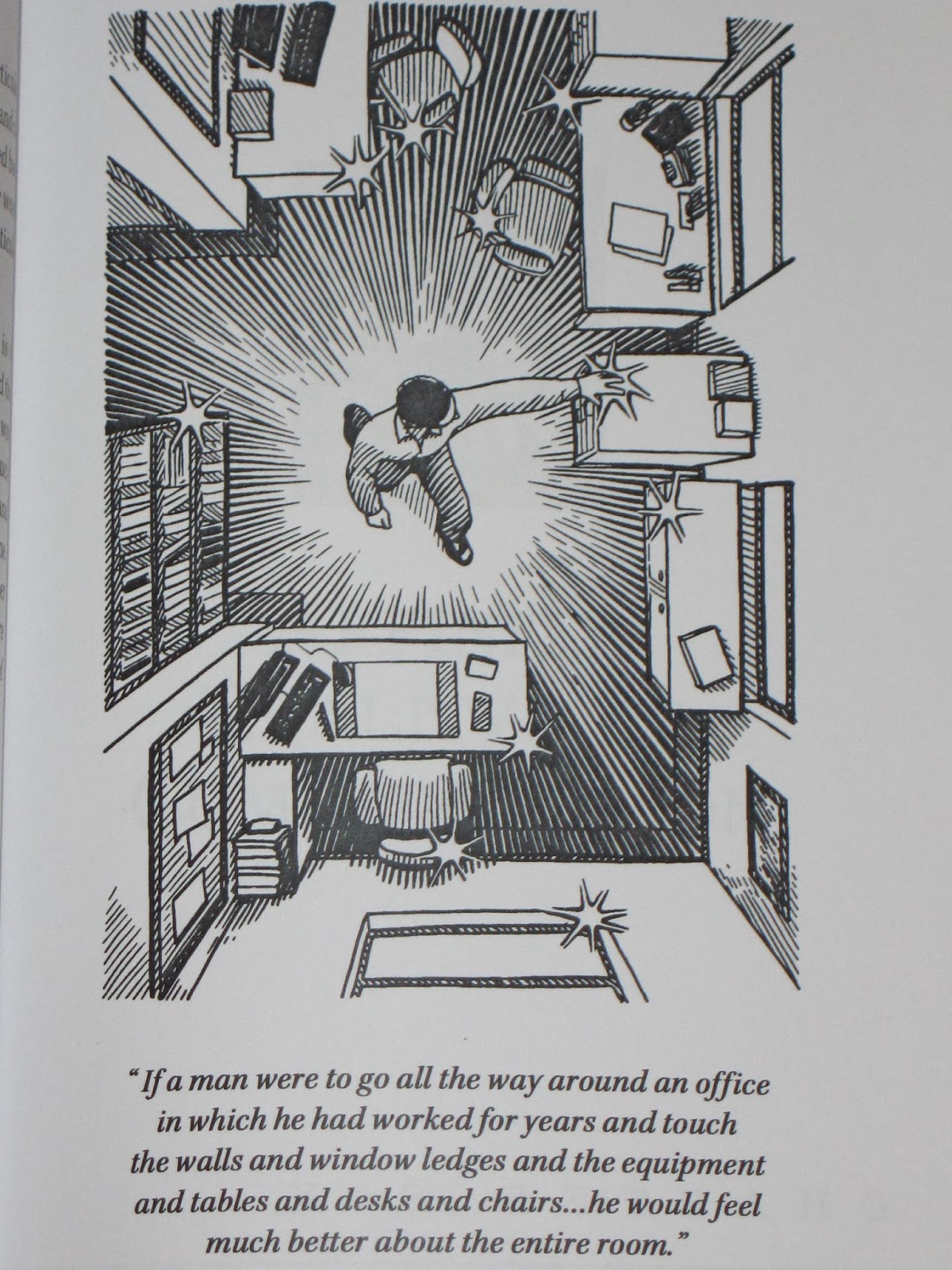 This book also offers some advice regarding marriage: “If one feels antagonistic towards one’s wife, the wrong thing to do is ‘beat her’!” (p. 112). I wonder why “beat her” is in quotation marks. And remember: “Before two people can feel any affinity for each other, they must to some degree be real” (p. 85). That is so true. It is difficult to have affection for someone if that person doesn’t actually exist. At least to some degree.

The Problems Of Work: Scientology Applied To The Workaday World was published in 1957. The edition I read is from 2007.
Posted by Michael Doherty at 7:20 PM