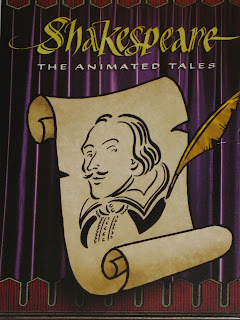 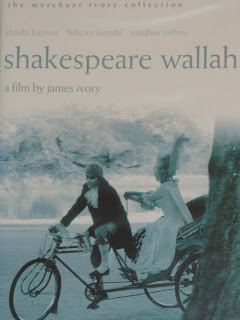 Yesterday was William Shakespeare's birthday.  At least, as far as we know.  They didn't keep accurate records of births.  However, they did keep records of baptisms and deaths.  And Shakespeare was baptised on April 26, 1564.  Generally baptisms were performed three days after a child's birth, so we assume he was born on the 23rd. We do know for sure, however, that he died on April 23rd.

So to celebrate the birth of the world's greatest writer, I watched a few DVDs....

- Shakespeare The Animated Tales: Romeo And Juliet (1992) with Linus Roache, Clare Holman, Jonathan Cullen, Greg Hicks, Brenda Bruce, Garard Green; screenplay by Leon Garfield; directed by Efim Gamburg.  This animated version begins with the brawl.  A voice over introduces the characters as they appear.  Scene i and ii are combined, with the Servant entering and asking if Romeo can read just after Romeo says "thou canst not teach me to forget."  It then goes right to the party scene at the Capulets' home, and then straight to the balcony.  Romeo isn't shown in the balcony scene until his line, "I take thee at thy word."  Romeo then goes to the Friar.  Act II Scene iii is done very quickly.  All of the great play between Juliet and the Nurse is cut from Act II Scene iv.  Instead, Nurse quickly gives Juliet the news, and then onto Scene v, the marriage.  Tybalt deliberately stabs Mercutio.  Most of Mercutio's lines are cut from his death scene, including the wonderful "grave man" line.  After Romeo kills Tybalt, it goes directly to the scene at the Friar's cell (Act III Scene iii).  When Nurse arrives, Romeo is on his feet, rather than lying on the floor.  We see Romeo climb onto Juliet's balcony to sleep with her, something not in the play.  Then right into Act III Scene vv.  And Juliet is told that she'll be married to Paris.  (However, we don't see Paris.)  We have a quick shot of Romeo on horseback.  Act IV Scene i begins with Juliet and the Friar, the stuff with Paris being cut.  As the Friar describes the plan, we see it all - to save time.  The film then goes right to Act V Scene i.  The scene with Romeo and Paris is cut.  Juliet wakes just before the Friar arrives.  She asks where Romeo is, then sees him and realizes he's dead without the Friar telling her.  (time: 25 minutes)

- Shakespeare The Animated Tales: Hamlet  (1992) with Nicholas Farrell, John Shrapnel, Susan Fleetwood, Tilda Swinton, John Warner, Dorien Thomas; screenplay by Leon Garfield; directed by Natalia Orlova.  This animated production has a really interesting look.  A voice over starts, "Something was rotten in the state of Denmark."  Then we begin with Act I Scene ii, with Gertrude's line, "Good Hamlet, cast thy nighted color off."  When Horatio tells Hamlet that he saw the King, we see what Horatio saw.  We get a bit of the scene between Ophelia and Laertes, but all of Polonius' advice to Laertes is cut (yes, including "to thine own self be true").  But we do get some of the dialogue between Polonius and Ophelia.  Then it goes into Act I Scene iv with the Ghost.  This scene is fantastic; it has a great, creepy look, and the voice is excellent (John Shrapnel did the voices of both the Ghost and Claudius, which is cool).  It then goes right to the Polonius/Ophelia dialogue from Act II Scene i (Reynaldo of course being cut).  Then Polonius relates the tale to Claudius and Gertrude.  Interestingly, the film then goes straight from a bit of the "rogue and peasant slave" soliloquy (starting with "Bloody, bawdy villain") into the "To be or not to be" soliloquy, but only up to "To die: to sleep/No more."  Then Hamlet sees the players arriving and goes back to the end of the "rogue and peasant slave" soliloquy, starting with "I have heard/That guilty creatures sitting at a play."  From there, we go to the Hamlet/Ophelia scene. After Hamlet says, "I did love you once," he notices the curtain move, and sees Polonius, and it's that that leads Hamlet to turn on Ophelia and say, "You should not have believed me/I loved you not."  A really nice choice.  Then it goes to the play, and then quickly to the Hamlet/Gertrude scene (skipping entirely the scene where Claudius is praying and Hamlet has the opportunity to kill him).  And the Ghost appears.  A narrator tells us that Hamlet was dispatched to England, and that secret letters condemned him to death.  Then to Act IV Scene i, with Ophelia's song.  And then Laertes' return.  The stuff with Ophelia and the flowers is wonderful.  As soon as Gertrude announces Ophelia's death, we go to Act V Scene i, starting with Hamlet asking whose grave this is.  And then we go back to Act IV Scene iii, when Claudius and Laertes devise their plan.  And then to Act V Scene ii, between Hamlet and Horatio (but Osric is cut).  And then to the duel.  This production ends with Hamlet's last line, "The rest is silence."  Fortinbras is cut completely.  (Also cut from this production are Rosencrantz and Guildenstern.)  (time: 25 minutes)

- Shakespeare Wallah (1965) with Shashi Kapoor, Felicity Kendal, Madhur Jaffrey, Geoffrey Kendal; directed by James Ivory.  This wonderful film is about a family that worked as a traveling troupe of Shakespearean actors in India.  The real troupe was called Shakespeariana, and it was run by Geoffrey Kendal with his family, including daughter Felicity Kendal.  Both of them star in the film.  Felicity plays Lizzie.  Geoffrey plays Tony Buckingham.  And the troupe in the film is called The Buckingham Players.  As you might guess, there are plenty of references to Shakespeare throughout the film.  The first is to The Merchant Of Venice.  While dining in a palace, the king quotes Portia from Act IV Scene i: "The quality of mercy is not strain'd,/It droppeth as the gentle rain from heaven/Upon the place beneath: it is twice bless'd; It blesseth him that gives and him that takes."  He says he goes to see Shakespeare not just for the poetry, but for the wisdom.  He then quotes from The Second Part Of King Henry The Fourth: "Uneasy lies the head that wears a crown."  And then one of the players then quotes from Richard The Second: "Let us sit upon the ground and tell sad stories of the death of kings."  Another player takes up the speech: "How some have been depos'd, some slain in war,/Some haunted by the ghosts they have depos'd."  Then we see a bit of a production of Antony And Cleopatra.  We get a bit from Enobarbus ("Purple the sails, and so perfumed that/The winds were lovesick with them"), and then we see Antony's death scene, with Cleopatra's lines: "young boys and girls/Are level now with men."  Later, Sanju (Shashi Kapoor) is flirting with Lizzie (Felicity Kendal) and he quotes Juliet: "Romeo, Romeo, wherefore art thou - That's all I remember."  The father is talking to the brother of the person running a school where the family usually performs, but the brother doesn't seem interested, even when he mentions Hamlet.  Then we do get a bit of Hamlet.  We see some of the Hamlet/Gertrude scene, and then Ophelia's madness scene, with the flowers.  Sanju after the play tells his girlfriend Manjula about it, but says he can't understand why Hamlet took so long to kill Claudius.  Later we see them perform Twelfth Night, the Malvolio cross-gartered scene.  And later still we see Othello, beginning with "It is the cause" through Desdemona's death.  The fact that they're family makes it a bit odd - after all, the daughter plays Desdemona and the father plays Othello (Felicity talks a bit about this in one of the DVD's special features).  And finally we see a scene from Romeo And Juliet, the wedding scene at the Friar's cell from Act II.  (time: 122 minutes)

Not a bad way to spend the evening.
Posted by Michael Doherty at 2:55 PM