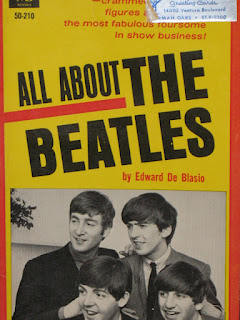 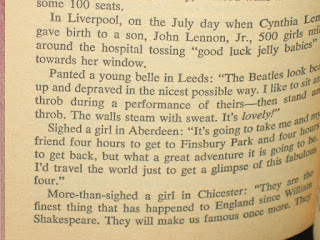 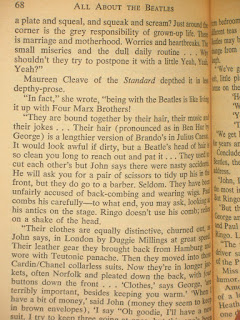 Yesterday I finished reading All About The Beatles, a short book by Edward De Blasio, a journalist who was on hand when The Beatles had their famous press conference at the airport in 1964. This book was actually published in 1964, so its perspective is rather interesting in its limited scope.

There are two references to Shakespeare. The first is on page 64 (see photo), in which a girl is quoted as saying, about The Beatles, "They are the finest thing that has happened to England since William Shakespeare. They will make us famous once more. They will give us dignity, without stuffiness." The second, only a few pages later (see photo), is actually quoting another journalist (this book does that a lot), Maureen Cleave of the Standard: "Their hair (pronounced as in Ben Hur by George) is a lengthier version of Brando's in Julius Caesar."
Posted by Michael Doherty at 5:39 PM