Shakespeare References In "Iris And Her Friends" 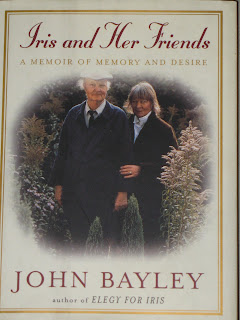 After finishing all the books I had checked out from the library on Othello, and before delving into the world of King Lear, I decided to read a book that had nothing whatsoever to do with Shakespeare: Iris And Her Friends: A Memoir Of Memory And Desire by John Bayley.  So of course there are nearly a dozen references to Shakespeare in the book.  I might have guessed.  After all, John Bayley had written a book on Shakespeare (Shakespeare And Tragedy, which I haven't yet read, but which I aim to read before the end of the year).

In Iris And Her Friends, he makes several references to Macbeth.  The book is of course about his wife, Iris Murdoch, and the struggle with Alzheimer's Disease.  Early in the book he mentions that the disease had entered another phase.  He writes, "For a moment, I thought I heard the voice of Macbeth, the most terrifyingly intimate of all Shakespeare's tragic characters. 'Methought I heard a voice cry "Sleep no more!" One is apt to get such dramatic visions of despair into one's head at two in the morning'" (page 4).  Later he writes, "'Most admired disorder!' Doesn't Lady Macbeth say that about her husband's behavior at their dinner party? Quite ruined her evening. She must have meant the embarrassment was something to be wondered at" (page 83).

He goes back to Macbeth again later in the book: "When his wife went off her head, Macbeth expected the same things from his doctor that we hope for from ours today. 'Canst thou not minister to a mind diseas'd/Pluck from the memory of a rooted sorrow...' I fancy that the doctor may have tried on his royal patient all the somnolent potions that were at his command, although he tells Macbeth, perhaps defensively, that the patient 'must minister to himself' when it comes to staying sane and getting a good night's rest. Sedatives are tricky things. Lady Macbeth's sleepwalking and her hallucinations could easily be the consequence of some too-strenuous type of soporific" (page 188).  (By the way, that's from Act V Scene iii.)

He refers to Macbeth once more when he talks about reading about murderers who copped up young women: "They lacked the ability to imagine without enacting. Had they been producing Macbeth - an unlikely possibility, admittedly - it wold have meant nothing to them unless Duncan and Banquo, and Lady Macduff and her children, had really been butchered - and on the stage" (page 204).

But Macbeth isn't the only play he refers to in this memoir.  He refers to As You Like It: "'Sweet are the uses of adversity...' the commonest, sanest Shakespearean wisdom" (page 17).  That's from Act II Scene i.

And later he writes, "You cannot fantasise about the being you love, that's true, and yet the being you love can inadvertently teach you things that will come in very handy on the fantasy side, where, as Shakespeare's Theseus puts it, 'The best in this kind are but shadows'" (page 208).

He also quotes The Winter's Tale, and in fact opens the tenth chapter with a line from that play: "'Thou mettest with things dying, I with things new-born.' It happens to me nowadays to be haunted by Shakespeare's line, which suggests that the two states are not so very different" (page 184).

John Bayley also makes a couple of references to Othello, specificallly to Iago.  On page 208 he writes, "Milton's Belial must have well understood this, and so incidentally did Shakespeare's Iago.  Brilliant as is Shakespeare's portrait of Iago, he has the difficulty of suggesting a man who is thoughtful and intelligent but also profoundly stupid; a man who, like those murderers the Wests, is ignorant of the difference between imagination and enactment. Wilfully ignorant, one presumes, in Iago's case? For he knows that there are 'meditations lawful' in the human breast which never will and never wish to see the light of day."  He goes on, "There are thousands of potential Iagos, in offices and organisations, in military and political circles, who would dearly love to deceive and betray their bosses as Iago deceived Othello."

Then, several pages later, John Bayley makes another brief mention of Othello: "'Evil into the mind of God and man may come and go.' Who says that? Is it Iago?" (page 215).

He makes one final reference to Shakespeare: "Virginia Woolf suggested that Shakespeare had a sister, equally a genius, who because she was a woman has never been heard of" (page 226).

Posted by Michael Doherty at 2:49 PM