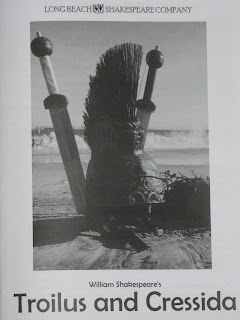 Each year the Long Beach Shakespeare Company chooses a theme for its season. The theme for this season is “Seldom-Seen Shakespeare,” focusing on works not often produced. The season began with King John, and continued with All’s Well That Ends Well, and now with Troilus And Cressida. The theme was chosen by Helen Borgers, the company’s previous artistic director who passed away at the end of 2017, her vision carried out by current Artistic Director Brandon Alexander Cutts, who also directed this production of Troilus And Cressida. The company performs at the intimate Richard Goad Theatre, which seats only forty-three people. (There is now an effort underway to rename the theatre in honor of Helen Borgers.)

When the audience is let in, approximately ten minutes before the scheduled performance time, the cast is already on stage, frozen in tableau. Ten minutes is a long time to hold a pose, but they somehow manage it. The space itself contains one raised platform in the upper right portion of the stage, with two sets of stairs leading from it, and three separate entrances upstage. Just before the play begins, the stage goes dark. Then, as the lights come up, one or two actors at a time break their poses and exit, leaving just a few soldiers who engage in a brief battle scene. Agamemnon (Chadwick J. Bradbury) steps forward, unmoved by the battle that happened in front of him, and speaks the first line of the production: “Princes/What grief hath set the jaundice on your cheeks?” This is in fact the first line of the third scene, as this production does a bit of re-ordering of scenes, and cuts the prologue entirely (the tableau taking its place). Agamemnon finds Ulysses’ speech about Achilles and Patroclus humorous, which leads Ulysses (Brando Cutts) to turn his speech onto Agamemnon himself, which then raises the Grecian general’s ire, a nice moment. Brando Cutts is excellent here, and delivers one of the production’s best performances. I particularly like the exchange he has with Nestor (Andy Kallok).

This production then goes to the first scene of the text, in which Troilus (Aaron Joseph) tells Pandarus (Kevin McGrath) of his love for Cressida. It is interesting that this production decides to introduce the audience to the Greek camp first before getting into the story of the title characters. Troilus speaks gently, with a voice of kindness and love, in contrast to some of the more aggressive tones of other characters (and might that be part of the reason for the re-ordering of scenes?). Kevin McGrath is delightful as Pandarus, particularly in the scene where he and Cressida watch the parade of men. Probably the best performance of the production is that by Amanda Swearingen as Cressida, made all the more remarkable by the fact that she came in just four days before the play went up, after the original Cressida took ill. When we first see her, she is adorable, with a coquettish and playful air. Each man that Pandarus describes enters from the audience and takes a spot on the platform, as if they are players on a team being introduced before a championship game, a nice and fun touch. Aeneas in this production is female, played by Ryanna Dunn, who also interestingly plays Helen (so she gets to play on both teams). So Pandarus’ lines about her are changed slightly. But it is after the men exit that Cressida and Pandarus really shine. And later, I love the pleasure Pandarus takes in getting Troilus and Cressida together, even leading them off stage to the bedroom.

Thersites (Leonardo Lerma) enters like a great explosion of color and sound and movement, followed by Ajax (Beau Nelson), in great contrast to him, a pouting brute. Both turn in wonderful performances and are fun to watch. I love that Ajax raises an eyebrow when beginning to consider Ulysses’ words of praise. And I love in a later scene when Thersites does a humorous impression of Ajax, lowering his voice. In Shakespeare’s text, there is some hint that Achilles and Patroclus might be lovers (like in Ulysses’ line “With him Patroclus/Upon a lazy bed the livelong day”). In this production, their relationship is not left in any doubt. When Achilles (Robert Watson) says “no man is beaten voluntary,” Patroclus (Alexander James Salas) coughs, indicating that he likes to be beaten, and Achilles hushes him. The two men then embrace, and there is absolutely no question but that they are lovers. Patroclus is played as a rather doting, admiring and overly effeminate young lover, and not at all like a soldier. The problem with this portrayal is that when the other characters ridicule Achilles, it seems to be in part because he’s gay, and not because of his proud and lazy nature. After all, the others are upset with Achilles because he is avoiding the battlefield, not for his romantic choices; Achilles is supposed to be a tough warrior. I prefer the slightly more subtle indications of the relationship, and there are those too. For example, when Ulysses says to Achilles, “‘Tis known, Achilles, that you are in love,” he happens to be facing Patroclus; but he quickly turns back to Achilles to finish the thought, “With one of Priam’s daughters.” But then Patroclus’ speech lacks the power it would have if he weren’t playing the character so effeminately. There are also some odd choices with regards to the playing of Agamemnon. On the line “Pride is his own glass,” he seems to mimic the act of taking a sip from a cup, when the word “glass” in this case means “mirror,” not something to drink from.

I love Cressida’s playful delivery of “O foolish Cressid, I might have still held off,/And then you would have tarried.” At the end of Act IV Scene ii, after Cressida says “I will go in and weep,” she and Pandarus freeze upstage while Paris and Troilus enter below for that brief Scene iii, an interesting way to do it, for in a sense they are then present while Troilus tells Paris he will deliver Cressida to Diomedes. Once Paris (Courtney Sims) and Troilus exit, Pandarus and Cressida begin Scene iv. Though this production does not do much in the way of set dressing changes, there are two curtains which are used for certain scenes. At the beginning of Act III, a blue translucent curtain is pulled across the stage, and Pandarus, Paris and Helen play the scene behind it. So it is as if we are peeking into their private chamber, uninvited, an audience of voyeurs. On his line “To a hair,” Paris rubs his shaved pate. Later, for the first scene of Act V, the curtain is drawn across the stage again, this time with the actors on the same side of it as the audience is, so it is like we are within Achilles’ tent now. Then a white curtain is drawn across the stage, with Troilus and Ulysses on the far side of it, and Cressida and Diomedes on the closer side. This is interesting, for we are now literally on the side of Diomedes rather than Troilus, as he begins to woo Cressida. Garret Martinez is much, much too young to play Diomedes. You need someone with some power, someone that Cressida would actually be attracted to, in that role. After all, she does sleep with him, despite her professed love for Troilus. Amanda Swearingen is absolutely fantastic in this scene when Diomedes demands a token from her. And I love how Ulysses opens the curtain to reveal Troilus’ face staring in the direction that Cressida exited, a wonderful moment.

Troilus And Cressida was directed by Brandon Alexander Cutts. There is one ten-minute intermission, which comes at the end of Act III Scene i (use the intermission to meet a pig named Hamlet). The play runs through September 15th, so get your tickets soon for this seldom-seen play. By the way, in 2010 I began seeing as many Shakespeare productions as possible, with the hope of seeing all thirty-seven plays (no, I’m not counting The Two Noble Kinsmen). Troilus And Cressida was number twenty-eight for me.
Posted by Michael Doherty at 3:02 PM